To celebrate the release of Suits Season 5 on DVD and Blu-ray, we’re giving away two copies on Blu-ray. 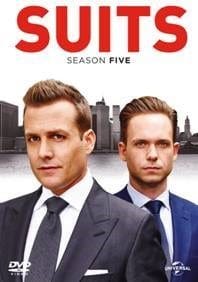 Once again college-dropout-turned-legal-whizzkid, Mike Ross (Patrick J Adams, Orphan Black), and New York City’s most fearsome and ruthless lawyer, Harvey Specter (Gabriel Macht, Love & Other Drugs), team up to take on their rivals. In SUITS SEASON 5, Harvey wrestles with his emotions when his trusted PA, Donna (Sarah Rafferty, Brothers and Sisters), leaves him to work for arch nemesis Louis (Rick Hoffman, Samantha Who?). Harvey’s misery is compounded by Jessica (Gina Torres, Hannibal), who is forced to decide if Harvey is ultimately the right person to stand by her side. Meanwhile Louis gets his own share of betrayal when his successful sister wants legal representation by the firm… just not by him.

Things seem rosy for golden couple Mike and Rachel (Meghan Markle, Horrible Bosses) as their wedding becomes set to be the talk of the town. With Harvey at a low ebb and Louis on a rollercoaster ride, however, there might well be tears at Pearson Specter Litt before anyone says “I do”.

Joining the fray in SEASON 5 is British actress Christina Cole (Chaos) who plays Dr Paula Agard, a Harvard-graduate psychiatrist who – on paper – is the perfect match for Harvey, and the woman to fill the Donna-shaped hole in his life.

We have two copies of Suits Season 5 on Blu-ray to give away.

Boundaries are crossed and alliances tested in the riveting SUITS SEASON 5, available on Blu-ray and DVD from 6th June, 2016, courtesy of Universal Pictures (UK).

Andrew Edneyhttps://moviesgamesandtech.com
I am the owner and editor of this site. I have been interested in gadgets and tech since I was a little kid. I have also written a number of books on various tech subjects. I also blog for The Huffington Post and for FHM. And I am honoured to be a Microsoft MVP since January 2008 - again this year as an Xbox MVP.
Previous articleReview: Vax Pure Air 300 Air Purifier
Next articleSee the new clip of meeting Hank from “Finding Dory”