Win All Roads Lead to Rome on DVD

To celebrate the release of All Roads Lead to Rome on, we’re giving away three copies. 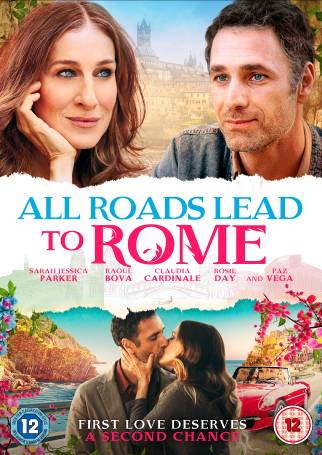 Sarah Jessica Parker (Sex and the City, I Don’t Know How She Does It) makes a much-anticipated return to romantic comedy after a five year break as Maggie, a stressed, uptight single mother and college writing teacher from New York City. In a last-ditch effort to reconnect with her troubled teen daughter Summer (Rosie Day – TV’s Outlander, Misfits), she books them a holiday to a Tuscan village which holds fond memories of her youth. However, the chance for some much-needed mother-daughter bonding hits a road bump almost immediately, as they run into Maggie’s handsome former lover Luca (Raoul Bova– Sorry, If I Love You, The Tourist) – still a bachelor and living with his eighty-year old mother (Claudia Cardinale – Once Upon a Time in the West, The Leopard).

With Luca and Maggie attempting to navigate the ghosts of relationships past, Summer, who is missing her wayward boyfriend in NYC, and Carmen, secretly planning a wedding against her son’s wishes, find a common ground. Impulsively stealing Luca’s car to race to Rome, the pair are quickly pursued by Maggie and Luca – forcing the mismatched pair to spend some ‘quality time’ together, confront exactly what drove them apart the first time, and come to a new understanding…

We have three copies of All Roads Lead to Rome to give away on DVD.

Andrew Edneyhttp://moviesgamesandtech.com
I am the owner and editor of this site. I have been interested in gadgets and tech since I was a little kid. I have also written a number of books on various tech subjects. I also blog for The Huffington Post and for FHM. And I am honoured to be a Microsoft MVP since January 2008 - again this year as an Xbox MVP.
Previous articleWin Dark Places on Blu-ray
Next articleReview: Far Cry Primal