I have always enjoyed the Far Cry series with its large sandbox playground and freedom to explore that world and tackle story missions in any way the player wants. The series has recently taken players to a wondrous tropical island and the peaks of the Himalayas but now the series is going old school, very old old school as players will be taken back to 10,000 BCE to a time of cave paintings, fierce wildlife and fighting to survive a harsh land. It is time to take Far Cry…Primal!

Far Cry Primal puts the player in the role of Takkar, a member of the Wenja people and hunter. It opens with Takkar being taken on his first Hunt for Mammoths when the hunting party is attacked by a vicious sabre tooth tiger. The leader of the hunting party, Dalso, is gravely wounded and gives Takkar a final command with his dying words. That command is for Takkar to go to the land of Oros and find his Wenja cousins.

This really forms the main drive of the game, to find and gather the scattered Wenja people in Oros and to bring them together. Takkar will meet characters who will team him the skills needed to survive Oros. Each of them will their own quest line of missions to follow which teach Takkar how to craft new weapons, how to Hunt and how to craft tools and weapons using the resources of the land. In true Far Cry fashion, how and when you undertake these missions will be free for the player to decide.

After setting up a cave as your home in Oros the player will have the opportunity to grow it into a homestead for the Wenja people as you gather them during the game. Each Wenja you save will be joined to the population and will increase the amount of resources the tribe will gather for you. The main characters you meet will want their own hut to call home, building them will open new skill tree upgrades and new missions to go on. By upgrading the huts the homestead increases and more Wenja will come to call it home. 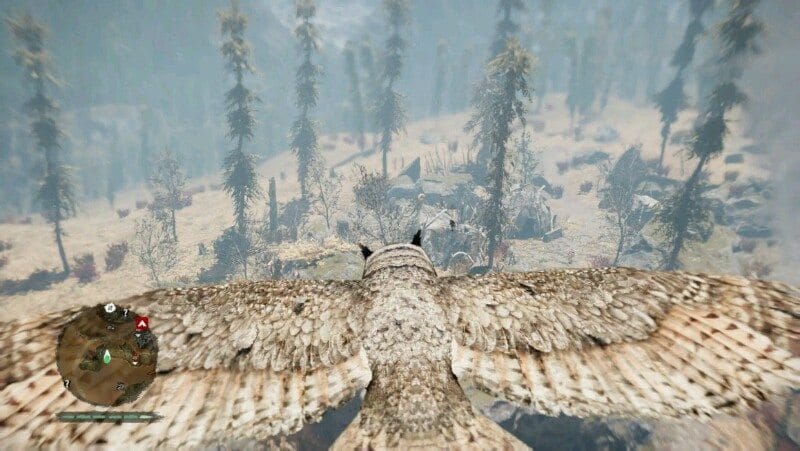 The greatest skill Takkar will learn will be the ‘Beast Master’ skill from Tensay the Shaman. This skill will allow the player to actually tame the wild beasts of Oros who will then become your companion. It is an ability that can be upgraded to learn to tame more ferocious animals. Each beast companion has an ability to aid Takkar from helping to hunt or more powerful attacks in a fight. Going into battle with a companion can be exhilarating as you send your breast into attack or having them defend you out in the wild. As you tame more animals they will become available to summon at any time and because they can aid in different ways, which one the player chooses becomes an extra strategy to use. I came to rely on mine quite often which made it heart breaking if one fell during battle and if you fail to reach them to revive them, they can die and you will need to tame another to call on.

The first of the beast master skills you learn is that of the Owl, a giant bird who pretty much serves as your own personal spy drone. Summoned by pressing up the D pad, the player will take control of it and gain a bird’s eye view of the immediate area, helping to track wildlife and enemies and scout outposts to help form a plan of attack. The Owl skin can be upgraded to increase its ability to tag enemies and even attack. Due to the setting of the world removing the modern vehicles and weapon arsenal Far Cry titles usually have, Beast Master helps to even the odds and for me the most fun element of Primal, especially when you learn to ride the larger beasts.

This element will come in handy often as not only will you encounter dangerous wildlife as you explore Oros but other less friendly tribal groups too. The most dangerous of these by far is the Udam tribe and their leader, ULL, becomes the main big bad of the story. The task will be to learn more skills and upgrade weapons and abilities to take on the Udam and ULL who will be no push over. 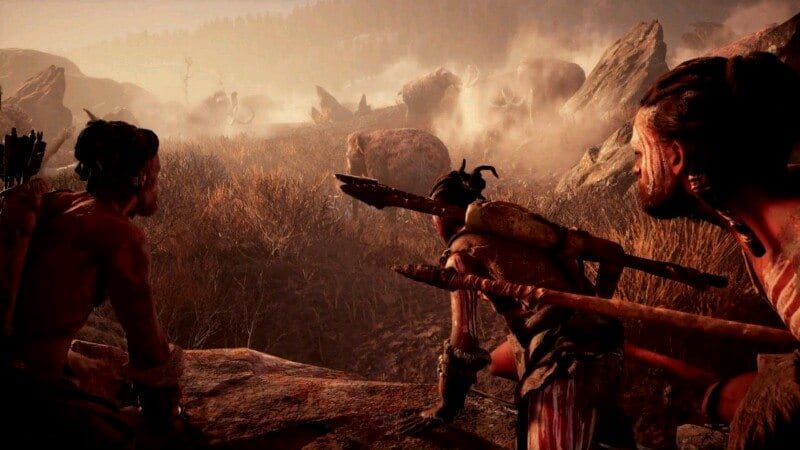 All the aspects of Far Cry that I enjoy the most have been highlighted and heightened in Primal. The freedom to explore the huge land of Oros and the same freedom to take missions when you choose are great gameplay mechanics. I found that by taking away the modern setting strips back the often ‘too easy’ approach to tackling situations. I am a big fan of using the bow and when you go on the Hunt, using your hunter instinct to track animals can be immensely satisfying. The different regions of Oros have differing environments and the variation in materials available in each one will encourage more exploration to find much-needed resources for upgrading and crafting.

Oros has a day and night cycle which sees the wildlife become even more aggressive at night with packs of wolves on the prowl. Such detail has been put into the wildlife that if you stop to observe them you will appreciate the animation of their behaviour. Whether it be predators or normal wildlife, they all help to make the world feel alive and vibrant and it is a beautiful one to be in. The missions are varied enough to always be interesting with some particular nice surprises which will certainly raise a laugh and a smile at times. Primal filled to the brim that on my review playthrough of just shy of twenty hours I had completed all the main story missions but still had a tonne of things left to complete.

Far Cry Primal takes the story back to basics in many ways but it keeps almost everything that makes a Far Cry game so much fun to play. With no Co-op or competitive multiplayer, Primal focuses on delivering a full and solid single player experience that not only celebrates the best of the Far Cry series but the freedom to be in a World setting so far away from the modern-day is just so refreshing amongst other titles right now. Primal provides a fantastic gaming experience which cleverly takes the player to a simpler time yet offered great gameplay.

Sometimes it just feels great to go all Primal!

Sean McCarthy
Freelance writer but also a Gamer, Gooner, Jedi, Whovian, Spartan, Son of Batman, Assassin and Legend. Can be found playing on PS4 and Xbox One Twitter @CockneyCharmer
Previous articleWin All Roads Lead to Rome on DVD
Next articleHalo the Arbiter coming to Killer Instinct Season 3