At E3 I had the chance to talk to Jamie Jackson about the forthcoming Guitar Hero Live. 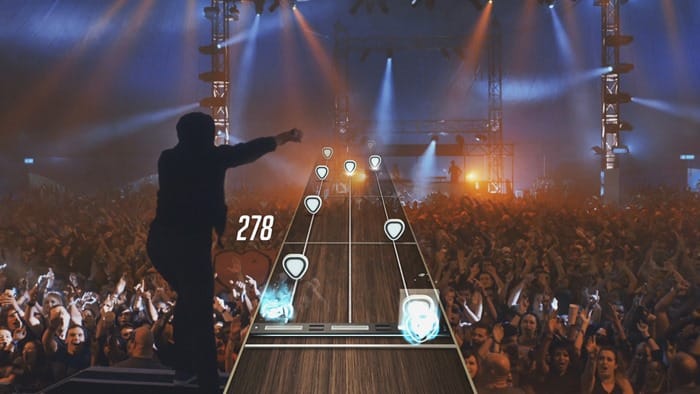 Guitar Hero, the pop culture phenomenon that introduced a new way to interact with music, is back with the all-new Guitar Hero Live, featuring breakthrough innovations that will re-ignite your dreams of becoming a rock star.

Developed by FreeStyleGames, the studio behind DJ Hero and DJ Hero 2, Guitar Hero Live introduces two powerful ways to play, including a first-person point of view where you are up on stage as the star of the show. A quantum leap forward in immersion and realism, Guitar Hero Live is a live-action experience that delivers the full emotional roller coaster of being on stage, with players performing in a real band, in front of real crowds, who react in real time to how well or poorly you play.

Jamie Jackson is the Studio Head of FreeStyleGames who are developing Guitar Hero Live, so over to Jamie:

Guitar Hero Live will be released October 20th on Xbox One, PlayStation 4, Xbox 360, PlayStation 3 and Nintendo Wii U.

Andrew Edneyhttps://moviesgamesandtech.com
I am the owner and editor of this site. I have been interested in gadgets and tech since I was a little kid. I have also written a number of books on various tech subjects. I also blog for The Huffington Post and for FHM. And I am honoured to be a Microsoft MVP since January 2008 - again this year as an Xbox MVP.
Previous articleCall of Duty Black Ops III Exclusive Interview with David Vonderhaar at E3 2015
Next articleDestiny: The Taken King Exclusive Interview with Luke Timmins at E3 2015