It’s not often an Indie developed title grabs the limelight at one of the industry’s largest events. Holding strong alongside both press releases and lashings of AAA announcements, Sony demonstrated its love for the smaller companies too at this year’s E3, showcasing Entwined, an Indie title developed by Pixelopus stirring up ideals and images of Flower and Dyad to hopefully create a classic. 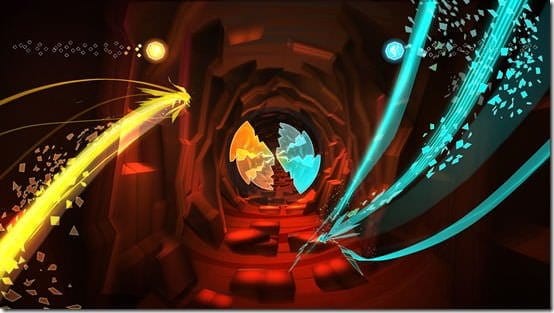 Whilst there is no strict narrative per se, it is heavily implied throughout your journey; being somewhat vaguely introduced to the playfully in-love bird and fish is all you’re going to get in terms of character development too. What is interesting however, is their eternal struggle to be together and how the player infers this.

Playing the game rings true of any ‘easy to learn, hard to master’ ethos, with the fish being controlled via the left thumbstick and the bird by the right, you must guide each party through appropriately coloured segments with the game delivering increasingly difficult sections to navigate the further you progress. Orbs of the same corresponding colour must also be picked up in order to fill each animal’s bar; once both are full, pressing L1+R1 joins their forms and speeds up the level; essentially making you repeat the process once more. Completing this sequence rewards you with the consummate conglomeration of bird and fish, the dragon. In this section the gameplay switches to a more relaxed style of play where the only objective is to fly around and collect orbs before sky writing your flight path and beginning the process anew.

Despite Entwined being privy to a relatively fresh and untapped genre, that’s not to say the novelty can’t wear off however. At least it might if there were more time for it to do so. The length of Entwined is not its strongest point, completing all nine levels along with the few challenges on offer will take less than 2 hours, admittedly more if you fancy yourself a spot on the leaderboards, but even with its meagre price tag of £6.49, it’s still not exactly great value for money. 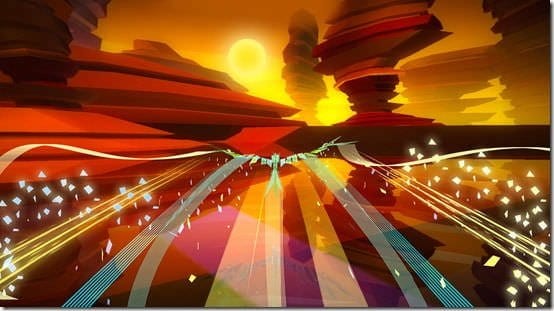 As for a learning curve it can yield mixed results, the first few levels are inherently easy, yet in some of the latter stages, it’s not only precision that matters, but alternating timing patterns. I imagine anyone even remotely versed in time signatures will have little trouble acclimatising, but for others (such as me) being able to individually coordinate between my thumbs and my peripheral vision became a little tricksome at points.

Graphically, it looks pretty much exactly what you might expect, bright colours, entrancing effects and more tunnel vision than an underground tube train driver. Coupled with the slightly underwhelming music, save for the track played over the credits; you’ll find its distinct presentation either a delight or a little bland depending upon the level. The highlights most certainly being the sky writing pieces; yet whilst only performable for around 10 minutes over the course of your short journey, and viewable via the small cutscene afterwards for less, they always manage to garner your attention the most.

Entwined appears to draw ideals and concepts from others in its genre as well as mixing it up with a few of their own, however they’re not quite enough to truly set it apart from its peers. Once you’ve grasped the basics, that’s about all there is to Entwined, the gameplay doesn’t evolve beyond its two pre-sets and therefore, unfortunately offers no real reason to return once complete. Inevitably the comparisons between other Indie titles such as Flower and Journey are going to often get strewn around regarding Entwined; whilst it may not have the immediate beauty of flower or the excellent social play of Journey, it does however have one of the better endings I’ve seen in a while. The companionship of the two unlikely beings, always striving to come together as one, more enigmatic creature can be awkwardly heart-warming; coupled with the unspoken narrative that you’ll make your own, ensures that Entwined is exactly what you make of it.