It’s not often something new and fresh enters our consoles these days; Airtight Games and Square Enix have donned their non-action orientated trilbies and created a mystery thriller called Murdered: Soul Suspect. 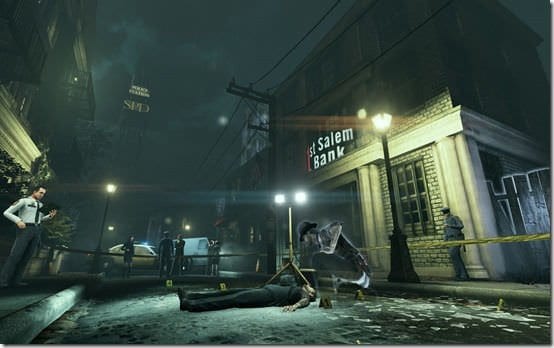 You play the larger than life (for around 30 seconds anyway) Detective, Ronan O’Connor who, after some home tragedies of his own, gets unceremoniously beaten up, thrown through a window and shot an unnecessary amount of times. Before moving on to the sweet embrace of both his departed wife and the afterlife however, Roman is seemingly caught in limbo; unable to pass through without getting retribution and discovering the identity of his killer.

Straight from the opening sequence, Soul Suspect sets itself up for what it represents throughout the entirety of the game, initial promise and intrigue, followed soon after by disappointment and tedium. One of the first mechanics you’re introduced to involves manipulating your body parts to accomplish a goal, such as lying down upon your own corpse, twisting limbs to fit the shape. Instead of intricacy levels to shame Surgeon Simulator, it simply ends there, that ‘mini-game’ never occurs again.

As a newly initiated spectral member, there are some quick ground rules to go over; unfortunately most of them are delivered in such a way to immediately flatten any exploratory desires you may have. As a ghost, you may only enter premises through either an open door or window due to a mysterious, and sigh inducing, ‘seal’ that’s placed upon each building. An instantly disheartening sign implying that there are only scripted areas to investigate. Whilst you can indeed pass through real life objects as if you’ve activated a ‘noclip’ mode, there are also spirit objects, outlined in the classic blue hue, which you also cannot walk through. Despite these often being from a more historically interesting time period in Salem, they often serve little purpose other than to impede you, save for an obnoxiously loud and deadly (somehow to the dead) train that appears later on. 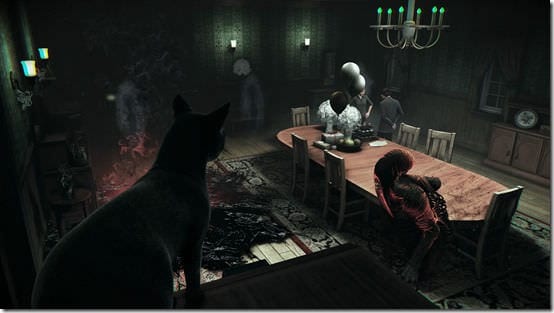 For such a relatively small map to wander about in, getting lost is a constant issue from the off. Without a mini-map or any kind of compass besides a mission waypoint, exploration for the multitude of collectibles quickly becomes frustrating, especially when so much of the game’s side plots rely upon the extra knowledge gained to become emotionally involved.

The games main narrative is its strongest and loneliest point; discovering the identity of the killer draws you forward whilst the game offers subplots to help fill in the gaps. Not that being a ghost demotes you to a life of solitude and isolation however, as for the sake of your sanity, you’ll meet a mysterious, ironically named, young woman called Joy. Becoming a pivotal character during the narrative, she’ll dip in and out, reluctantly offering her skills throughout the campaign in exchange for a few impossible-to-fail escort missions.

When you’re not wandering aimlessly, searching for mysterious snippets of Salem’s history, you’ll be inside one of the games main areas, searching instead for mysterious clues in a crime scene. Starting with the first case, your own cause of death, you must scour the crime scene for any and all relevant clues relating to the crime before taking a stab at solving the case. These should be the main focal point; however, as is the case for the majority of the game, it’s simply too easy and doesn’t punish the player in any way for wildly stabbing at the answer. There’s a rating system out of three for each case, yet seeing as there is no way to replay missions, a wrong guess simply becomes an irritating blot on an otherwise unimportant record. The problem often being the usual scenario in games such as this, being that the player will often know how to solve the puzzle, yet translating that into how the game wants it entered can often result in frustratingly incorrect answers.

A great, but underused mechanic involves being able to read people’s minds. At any point you can jump into someone’s head and pry into their thoughts, however the generic responses tire and repeat too quickly. It’s not uncommon to hear the same phrase being uttered ad nauseam, despite how far through the game you may be. Linking to this, one of the main drawing points for me, was the ability to influence peoples trains of thought in order to point out some pivotal or poignant evidence. However, much like all the best snippets of Souls Suspect, that’s all they are, there are very few instances where you are required to progress a case this way; it’s a shame that another unique idea gets so underutilised. 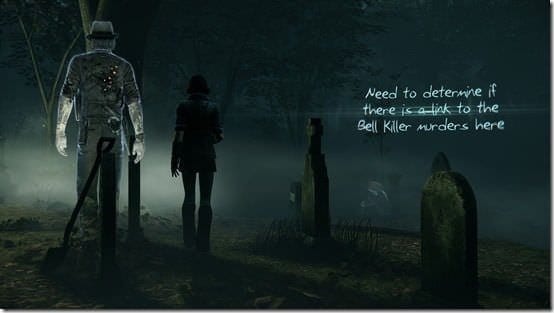 In order to spice the game up a little, there are a few sections of ‘action’ dotted around, these take the form of small stealth orientated sections involving roaming spirits that scream ‘honestly, I’m not a Dementor’. Essentially, you have to creep up behind them to win. They’re always on scripted patrols and often in groups to attempt to up the challenge, whereas all you really have to do is wait behind a wall until one passes and subsequently vanquish it. The supposed method of dispatching them involves teleporting through ghastly images of former humans, yet if they spot you, they’ll relentlessly follow and check the one spirit you’ve decided to hide in every time despite the game stating that you can lose them this way.

The length of Soul Suspect might disappoint some, especially if you’re not into collectibles, as playing through the main missions, completing the handful of side objectives on offer and nabbing a vast majority of the secrets still managed to come in at less than 12 hours. Considering the lack of any manual saves, if you wish to replay a section you’ll have to start up a whole new game; at which point, I’ll note that it doesn’t carry over any collectibles progress, so if you want them all, grab them before jumping into the final area.

If there’s one thing Soul Suspect does succeed at, it’s the narrative. The presentations of the flashback cutscenes are very much in the vein of cinema and television, lending it that extra air of authority whilst delivering its key moments. Coupled with the stellar voice acting from the main cast makes it an immersive place to be at times, the occasional wonky animations and the inability to run or even traverse areas with any pace until later on in the game grates however.

Soul Suspect houses many interesting and unique concepts that for some reason don’t develop, expand or even continue throughout the game. It comes across as more of a slew of gameplay ideas, not always implemented well, wrapped around a solid story that on its own, is worth experiencing. The only real trouble here lies with that most of the background characters, places and events rely upon exposition told through collectibles instead of normal progression, especially infuriating when so much of it is genuinely interesting. Don’t expect any branching storylines, tricky puzzles or a non-clichéd badass cop, instead simply enjoy and focus on the story.

Sam Thompson
Previous articlePayday 2: Crimewave Edition coming to PS4 and Xbox One
Next articleEnemy Front out now for PS3, Xbox 360 and PC