QNAP has announced the general release of QTS4.1, adding several new features and enhancing some previously-released ones.  Read on for details! 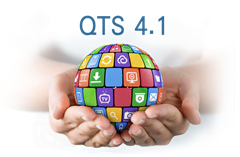 QNAP has announced the general release of QTS4.1, adding several new features and enhancing some previously-released ones.  Here is the press release:

As the functionality and performance of modern network-attached storage increases, so does the potential that they get too complicated for everyday home use. “QTS 4.1 operating system however provides a wide-range of apps that greatly simplify the operation & management of the Turbo NAS. With dedicated apps for enjoying multimedia, managing files and backing-up data joined by the all-new Notes Station and Signage Station apps, QTS 4.1 provides home users with everything they need in a useable and straightforward manner,” said Tony Lu, product manager of QNAP.

This ease of operation is extended by an array of mobile apps for Android™ & iOS® devices that allow users to monitor and sync, stream and share from their Turbo NAS at anytime, anywhere. And with an active QTS 4.1 App Center and open development platform, users are provided with the potential of near-unlimited functionality for their Turbo NAS servers.

“QNAP takes great pride in creating high-quality networked storage solutions for home & business use,” added Lu. “The evolutionary QTS 4.1 enables users to fully utilize the power & potential of our Turbo NAS whether for home or business use. With a growing range of rich apps complimented by an active app development environment and our constant focus on evolving the QTS operating system, users will continue to experience the very best in networked storage solutions from QNAP.”

For more information on QTS 4.1 and other QNAP networked-storage solutions, please visit www.qnap.com.

I installed this release on my TS419P+ and am seeing some cosmetic improvements to the GUI…I intend to look into the Notes Station and other improvements, so stay tuned.