Parrot has announced the successor to the AR Drone 2.0, the Bebop Drone.  Read on for details! 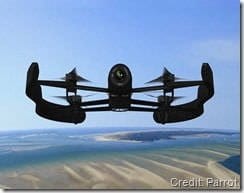 Parrot has announced the successor to the AR Drone 2.0, the Bebop Drone.  Bebop sports a 1080P camera and uses a fisheye lens and fancy firmware to deliver a stable picture.  Smaller than AR Drone 2.0 and with about 12 minutes of flight time, Bebop also has integrated GPS and can be programmed to fly unattended from your smart phone or tablet.  Parrot also announced a controller that supports VR using Oculus Rift, a nice addition to piloting options.  Bebop is due in Q4 2014 and MSRP is TBD.

Check out this launch trailer.

Here is the press release.

Parrot Bebop Drone, the ultra-light drone with a full HD camera digitally stabilized on its 3-axis! 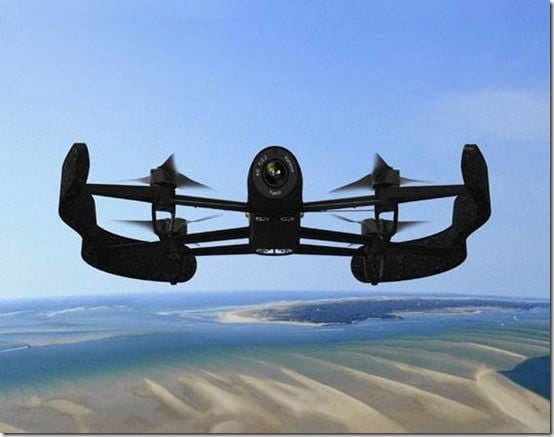 With Bebop Drone, Parrot demonstrates its technological expertise and confirms its commitment to the civil drone market. The Bebop Drone is a super-high-tech leisure quadricopter with features of a professional one!

Equipped with a 14 mega pixels fish-eye camera, the Parrot Bebop Drone takes video and pictures of the world in a 180° field with remarkable image quality. Endowed with a fully digital technology of image stabilization, the Bebop Drone captures video despite the movements inherent in aerial footage.  The combination of numerous sensors gives it impressive stability and great maneuverability when piloting with a smartphone or a tablet.   The use of the latest Wi-Fi 802.11ac MIMO and of four ceramic antennas 2.4GHz and 5GHz ensures an unequalled reach.  For extreme sensations, the Parrot Bebop Drone can be piloted with an optional controller compatible with FPV glasses.  Parrot extends its range of leisure drones with the Bebop Drone that takes professional-quality images.

Parrot Bebop Drone is equipped with a 14 megapixels « fisheye-lens » front-facing camera that records video in Full HD (1080p x 1920p) and streams live immersive views of the flight on the screen of the piloting Smartphone or tablet.

The pilot can control the angle of the camera simply with his thumb, directly from the piloting application. The shifting on a 180° angle is fully digital.

Thanks to algorithms developed by Parrot engineers, the Bebop Drone benefits from an exclusive 3-axis image stabilization system that maintains a fixed angle of the view, regardless of the inclination of the drone and movement caused by turbulence.

The camera of the Parrot Bebop Drone is mounted on an ingenious structure with rubber shock absorbers that cushion vibrations.

The images taken by the Bebop Drone are digitally treated thanks to the Parrot P7 Dual core processor, its GPU and a proprietary Image Signal Processor.

The landscapes are captured on the 8 GB flash memory of the Parrot Bebop Drone with a gripping precision and sharpness.

After the landing of the drone, videos (MP4 format) and photos (JPEG and DNG formats) can be transferred onto the piloting device or a computer via Wi-Fi or via the embedded micro-USB connector.

The Parrot Bebop Drone is piloted via Wi-Fi through a free application available for iOS and Android Smartphone and tablets.

To guarantee optimal stability of the quadricopter, without compromising maneuverability, the Bebop Drone integrates data coming from numerous sensors:

The Parrot Bebop Drone is equipped with 4 Wi-Fi antennas so it can manage the 2.4 GHz and 5 GHz frequencies in MIMO (Multiple Inputs Multiple Outputs) format.

The Wi-Fi liaison uses the latest Wi-Fi 802.11ac.  Depending on network interference, the pilot can select the frequency of his choice.

The Parrot Bebop Drone integrates a GNSS chipset that associates the GPS, GLONASS and GALILEO data. The Bebop Drone is capable of autonomous flight and automatic return to the take-off position.

The Bebop Drone automatically records the data of each flight on Parrot cloud: “Pilot Academy”.

A featherweight of high technologies

About 50 engineers, specializing in digital signal processing, aeronautics, Wi-Fi radio and industrial design, worked on the development of the Parrot Bebop Drone, a highly performing high-tech jewel weighting 380 g without its hull (400 g with the hull) and enabling indoor and outdoor flights without the risks linked to the weight of more imposing drones. 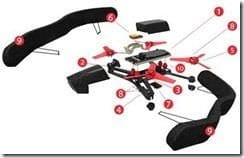 01. Mother board (Parrot P7 dual core CPU and quad core GPU – 8Gb flash memory – All are fixed on a magnesium shelf that acts as electromagnetic shielding and as a radiator.)

08. Vertical stabilization camera (Every 16 milliseconds, an image of the ground is taken and compared to the previous one to determine the speed of the Bebop Drone)

Ultrasound sensor (Analyzes the flight altitude up to 8 meters)

09. Hull in EPP (Clip and unclip easily to adapt to indoor and outdoor flight – Protects the propellers against potential bumps – Can be removed to reduce wind factor )

The Parrot Bebop Drone comes with a free piloting application, FreeFlight 3.0, for iOS and Android Smartphones and tablets.

The ergonomics of the application have been developed to offer a perfect ease-of-use and to let the pilot focus on the pleasure of flying.

When the ‘take off’ button is touched, the Parrot Bebop Drone starts its engines, takes off, stabilizes and awaits the pilot’s instructions.

The left thumb activates a virtual joystick that enables control of the altitude of the drone, its rotation and movements while tilting the smartphone/tablet, to indicate the direction: forward, backward, left, right.

The right thumb enables control of the angle of tilt of the front camera while flying.

A ‘flight plan’ piloting mode enables the pilot to program an autonomous flight, using the functionalities of the GNSS chipset.

When the ‘landing’ button is touched, the Parrot Bebop Drone lands smoothly.

A ‘Return Home’ button makes the Bebop Drone come back to its take-off position, guided by GPS.

To benefit from a more powerful Wi-Fi connection, Parrot will offer the  Skycontroller as an option. 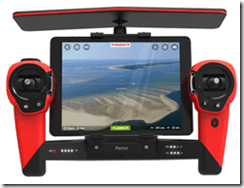 Equipped with an amplified Wi-Fi radio and with 4 antennas, the Parrot Skycontroller extend the Wi-Fi range up to 2 kms.

The piloting Smartphone or tablet is fixed on a shelf that is compatible with the vast majority of the tablets available in the market.

The pilot takes the helm of the drone via 2 joysticks.

For extreme sensations, it is possible to connect FPV (First Person View) glasses to the Parrot Skycontroller with the HDMI plug. Then, leaning the head will position the camera of the Bebop Drone!

*Expert pilots and beginners should take the helm of leisure drones in a responsible manner and in respect of the local rules and regulations. 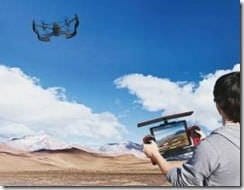 This looks like a nice update to the AR Drone 2.0.  I wish we were talking about more than 12 minutes of flight time, but integrated GPS and mission planning on your mobile device out of the box is a nice touch.  As I hear about details on pricing and release date, I’ll be sure to let you know.

Jim McCarthy
My tech interests include WHS, media streaming, and gaming, among others!
Previous articleWatch Dogs to run higher resolution on PS4 than Xbox One
Next articleNew IMAX trailer released for Edge of Tomorrow

BluOS, the premium multi-room music management platform by Lenbrook International, has announced a number of enhancements that will come with today’s release of version 3.14.
Reviews

Here is our review of the HELM Audio DB12 AAAMP Mobile Headphone Amplifier.