Review: War of the Vikings

Since the current, almost oversaturation of modern military shooters adorning the market today, it can be difficult to stand out against the crowd when creating a multiplayer game. Fatshark and Paradox Interactive have managed to distance themselves from the crowd however, bringing to us a sequel of sorts to the close quarter combat orientated War of the Roses, aptly named, War of the Vikings. 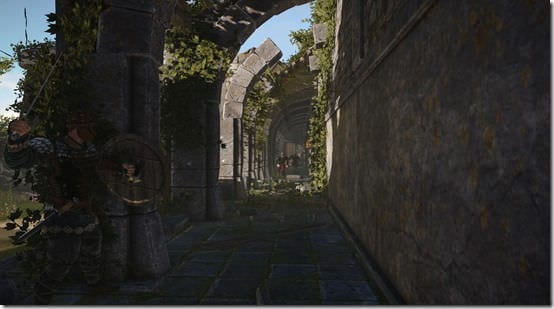 War of the Vikings isn’t your traditional game, yet judging by most descriptions and blurbs, it is. A multiplayer combat game in an open area, where the skills of the players matter. In fact in the tutorial itself, you are trained in the arts of blocks, parries and attacks. The problem being, is that you’re trained in a largely 1v1 scenario; the real battles could honestly not be further removed from this.

Expecting a well matched bout of skill and awareness, I dove into my first battle with a Viking roar and little trepidation. My valiant roar was soon reduced to a childlike weep as around 30 other players brawled around the map, all seemingly unaware of the fresh meat on the battlefield. With my training in tow, I strode across to my first prey, before getting unceremoniously killed by a teammate. After that, things only got worse.

After steadying my resolve I chased the roaming Katamari ball of Vikings across the map and got stuck in. It wasn’t too long after, that I discovered you get punished for (accidental) team kills, something that is nearly unavoidable whilst playing this game. Along with the standard melee weapons, there are also ranged bows and spears to try your hand at, but being able to get off an accurate shot whilst everything around you drifts into chaos, it can seem to favour luck over skill.

Whilst I can sympathise with those who’ve tried it, gotten a Saxon style beating and turned it off, there is a defiantly fiendish learning curve to overcome; mainly down to the controls. Not only does it seem counter intuitive (in practice) to both hold the button and flick the mouse in the required direction, but also to add timing and precision, can make it rather daunting. Stick with it though, and you’ll soon be able to fend for yourself, providing you choose your battles wisely! 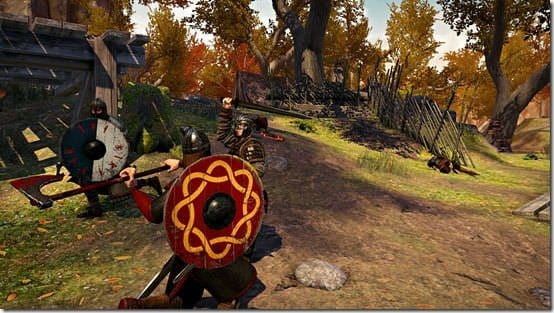 As is always the case, becoming better at the game requires you to sink more time into it, however due to the lack of varied game modes; this could pose an issue in the long term. Alongside the chaotic and often frustrating team deathmatch, there are also modes common to other multiplayer games. The small team based arena mode can be the most fun, mainly due to the reduced amount of players, allowing you to be a little more deliberate with attacking. Another objective based mode, where you only have one life can also be fun, but needless to say, it’s not particularly suited for beginners!

No self-respecting multiplayer game would be complete nowadays without the fabled create a loadout screen; War of the Vikings is no different. The currency and experience you earn during battle can all be used to help personalize your loadout with unlocks to suit one of few limited play styles. Whether it be charging blindly at the enemy, or vainly attempting that cross-map arrow shot you’ve been hunting, you should be catered for. Aesthetic choices are also available should you desire a more dishevelled beard or a more threating great axe, one thing, mysteriously missing, is the option to do battle as a fearless maiden. Instead, you’ll just have to equip the most feminine looking facial hair and stride confidently onwards.

Whilst the combat can be quite satisfying, the timing required for critical hits, successful parries and capitalising on an opponent’s misfortune are all reliant upon a stable and quick connection. There were times I was thrust into a lobby where it resembled a medieval PAC-MAN adventure. When everything goes your way however, it can be genuinely thrilling to beat opponents due to tactics and quick reactions; not having to rely upon furiously spamming the left mouse button. 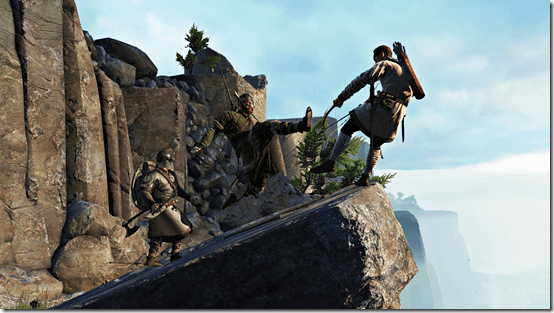 The maps are generally great to look at; with variations in locales and size, however playing them in a full server can be more stressful than fun. After a few 32 player matches, you’ll soon start to look for the smaller lobbies, mainly for a more tactical battle. It often seems as though every flank route is ignored, which in a competitive multiplayer game, was quite the eye opener. The general unspoken battle plan seemed to be to rush into the centre, axe flailing wildly, before re-spawning within touching distance of an enemy. If this is an accurate portrayal of Viking warfare, it’s of no surprise that their life expectancy was of a low age!

Whilst the game might not be pushing the limits of any graphical abilities, it does look nice enough, the detail on your character can be fairly impressive and the maps all possess a distinct look. Whether it be forestry or frosty, each map has its own play style to adhere to as well, meaning some will be undoubtedly more fun than others to play on depending on your style. The lack of music, except on the main menu, and the hammy voice acting can often detract from the otherwise, somewhat engrossing experience and unfortunately instead, forms a polar opposite to the intended immersive depth of the controls.

Whilst it may well turn off any newcomers due to the hectic forays into battle, difficult to master controls and sheer hysteria involved in most matches, there can be some fun to be had in War of the Vikings. Dedicate some time and hard graft however, and it will pay off; hopefully leaving you one of the select few Vikings left standing. The tools necessary to accomplish your desired tactics are there, it’s just ultimately whether you can get past some of the inherent gameplay barriers before losing interest. Certainly not for everyone, but for those who can find their niche, it can be a refreshing change of pace from the norm.

Ocean’s Heart is the latest game by Max Mraz, which some people might know of thanks to Yarntown, a 2D hommage to Bloodborne.
Read more
Gaming

Crowdy Farm Puzzle is a delightful 5-in-1 puzzle game which can be enjoyed by every member of the family.
Read more
Gaming

Budget Cuts on the PSVR is the exact definition of a mixed bag. For everything that I came to enjoy, there was at least one thing that became an exercise in frustration. If you're like me and only pull the headset out every once in a while, this will probably not be the motivation to do so.
Read more
Gaming

And an almost unanimous one at that.
Read more