I decided when I started writing this article that it would be almost impossible not to mention the obvious. And try though I might I was right. I was trying to avoid comparing these to the newer titles and wondering how square can go forward considering a remake is a decisively backwards step. For me at least, Final Fantasy X and X-2 are two of the best RPG’s ever and certainly rank high in Square’s respectable hall of fame.

I push for games to innovate and move a genre on but it’s a difficult move to make. We all like new and exciting things but changes like those that happened after Final Fantasy XII really only need to happen once a genre begins to stagnate. And some might argue that at its core Final Fantasy hadn’t changed all that much since FFVII in 1997, and even before. But given the massive differences between the characters, the worlds they live in and the levelling systems I didn’t think it was stagnant at all. The classic Final Fantasy formula that created some of the most loved games of all time is probably all the more popular now that Square are firmly moving in a different direction – for better of for worse. 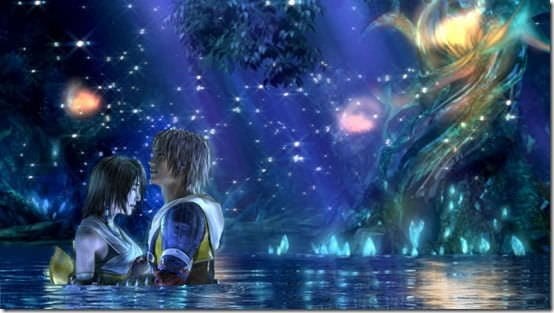 But this ‘remaster’ is another, and probably the last, chance we’ll get to experience FFX and X-2 with reasonably modern graphics on current hardware. So just for a little while lets be ignorant of the fact that XIII, XIII-2 and Lightning Returns ever happened and enjoy some ‘proper’ FF goodness.

It goes without saying that the biggest change to the remasters are the visuals. Both games look impossibly good. Square really have done a spectacular job updating them both to HD. There’s a whole lot less stepping on diagonals and edges and it’s quite clear that this is more than ‘just’ the standard HD remake. That being said some things are beyond repair. NPC’s faces for instance take a bit of a beating from the new HD resolution.

In X in particular you can really see just how bad some textures are. But they’re old games and a few bad textures here and there certainly aren’t the end of the world. But you will notice them. Luckily the main characters and the menus have had loads of attention paid to them so most of the time things look great. The menus in particular have been totally redesigned to accommodate the new pixel count bringing them pretty close to modern games. I really wouldn’t be disappointed if they’d released these games for the first time yesterday – especially given how good the gameplay is.

The sound has also had a revamp to bring it up to date. Final Fantasy’s of old always had great soundtracks which for me, and many others, was one of the greatest components of what made them so great – back in the days of the great Nobuo Uematsu. So it’s great to hear these classic pieces in a more modern audio codec. 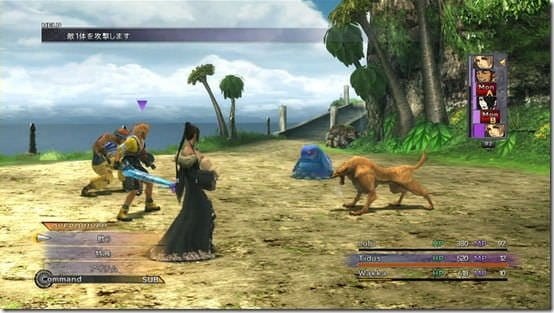 The combat and general progression are left untouched from the original international versions of the games. And that’s a good thing. Square have resisted the temptation to ‘just change this’ or ‘make this bit a little easier’ and things remain largely as they where in the original. That’s why we all want to play this remake and Square clearly appreciate that and have left things alone were they should.

Strangely during the final chapter of X-2 I found myself feeling surprisingly emotional. Even given the improved fidelity this obviously wasn’t because of the character’s lack of facial expression or dated voiceovers. Then I realised it’s largely because I care about the characters (yes, even without fancy next-gen effects Square). As Yuna & Co jetted off saying their goodbyes to everyone the parallels between my experience and theirs struck me. I bet there’s very few of you who found it possible to give Lightning and her crew the same respect.

It’s a bittersweet feeling. I can’t help but feel that there’s never going to be a Final Fantasy quite as good as these ones (apart from the obvious). They look good enough that it didn’t concern me and I got more than enough play time out of both. But I found it increasingly difficult to imagine myself playing anything post XII.

And I think square must know that deep down. If you look at the care and effort they put into rejuvenating these classics they must be aware of their importance to fans. It’s great that we all get to enjoy these truly amazing games once again, even better if you never played them, but there’s a constant sense in the back of my head that this is classic Final Fantasy’s swan song.

At no point during my adventures did I long for better textures or even care about the dubious lip syncing. At no point did I miss the ‘more exciting’ combat that largely dismissed tactics. At no point did I miss Leona Lewis or that damn version of the Chocobo music that had lyrics. However I enjoyed levelling up and exploring optional areas. Missing items just because I forgot to talk to someone earlier. The total fantasy of the plot and decent characters. The tactics of proper ATB/turn based combat even without most of the ‘flash’ of post XII titles. You can’t beet a Summon for spectacle! Apart from maybe XII’s quickenings. 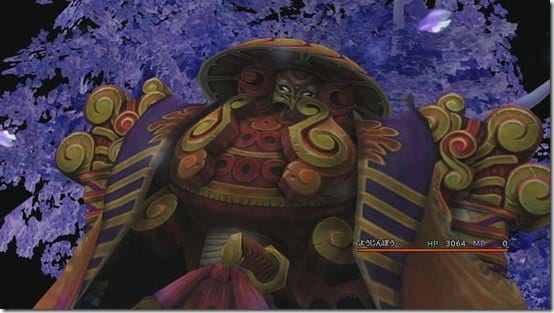 FFX/X-2 is a resounding success that reminded me why I used to love Final Fantasy games so much, breathing new life into something I thought lost to the past. It’s probably the most impressive HD remake I’ve seen too. Although it took Square what seems like forever the results are clear and spectacular if nothing else. I’m not sure if its a good thing or not but I wish Square were doing a XII HD remake next instead of Versus. For better of for worse these are the best Final Fantasy I’ve been on in ages. They certainly stand head and shoulders above anything after XII so far.

I hope Square start to realise that looking forward isn’t the only thing that can be done and start looking at why their greatest works, and possibly the greatest RPGs ever, are now behind them. A new Final Fantasy that considers why X and X-2 can still make a mark and stand up against the competition two full console generations into the future could be nothing but a success. No more excuses Square. If X and X-2 prove anything it’s that there’s still a place for the classic Final Fantasy experience.

phillvine
Phill has been the director of a small IT repair business since 2011 which he runs alongside studying for his degree in Information and Communication Technologies at the Open University. Video games are his real passion and they take up more of his time than he'd like to admit.
Previous articleReview: The Elder Scrolls Online
Next articleJoin the War Thunder PC closed beta today