After it’s unnecessarily successful Kickstarter campaign The Banner Saga is here. It’s nice to see that there are still a mass of gamers who appreciate, and want, turn based strategy titles. There’s definitely not as many of them around anymore but that’s what crowd funding is for. Long live Kickstarter!

As soon as the game is loaded you will be lavished with Banner Saga’s truly beautiful hand drawn style. Every aspect of The Banner Saga is draped in Norse mythology. From the music to every aspect of the visuals, from the smallest menu detail to the characters’ beards, is convincingly Viking. It’s a joy to be so immediately and deeply immersed into a game’s style and Banner Saga isn’t afraid to embrace what it is. If you can find a game with more horns, beards and axes I’d be amazed. 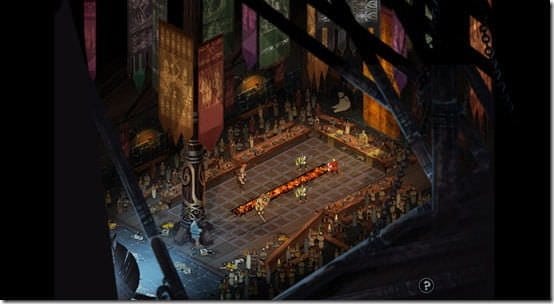 There’s an intentional slow pace to the plot sections outside of combat that lend Banner Saga a sense of weight and poignancy. True to their word, Stoic don’t patronise and Banner Saga delivers a mature story driven by characters and the decisions you make. And all of that is done through text and the gorgeous artwork. The artwork alone is enough to keep you coming back but even so there is more to Banner Saga than just undoubted good looks.

The decision trees that make up your interaction with written texts are almost MUD (for those who aren’t geeky enough, Multi-User Dungeon) like in their approach. There’s a definite Dungeons and Dragons feel to things. With the game acting as Dungeon Master proceedings are described mainly in the text with the artwork and music backing things up. There’s no expensive motion capture or flashy graphics. Instead Banner Saga relies on pretty graphics and solid gameplay.

And decisions actually matter too. At one point there’s a choice weather to bring along a certain character or not. And if you do they fight with you in the combat, making it easier. But after the combat one of them is threatened and only if you make the correct choices can you save their lives. The fact that you are making a choice is a little more transparent due to the text based nature of things but they are equally, if not more, important than they are in games like Mass Effect. Characters can die. If they die you no longer get to interact with them or use them in battle. Other decisions might come back to haunt you later on. And occasionally you might even get the outcome you wanted.

To keep things tactical as events unfold your characters will be part of a travelling caravan. Choices you make as well as success rates in combat will effect the amount of people in that caravan. The more people you have the more they will eat. But certain things, such as large battles, will be easier. To sustain them you will need supplies that can be bought from markets. But you never know when you might be able to stop at a market so even just moving the quest on has inherent risks beyond combat and world events that you cannot prevent. The list of options and choices combined with their effects is more than enough to keep your attention and ensures that there is always at least a little strategy to consider.

Strangely, Banner Saga can play quite similar to a Total War title with two separated gameplay elements that still effect each other. Once you’re done buying items and levelling up your heroes eventually some combat will present itself. When a game relies on separate elements in this way it really comes down to pacing. Provided both are good, the only thing left is to make sure you want a bit of the other thing by the time your done with your current tasks. Making sure one aspect doesn’t become the chore isn’t easy but I found Banner Saga struck a good balance and as such I always looked forward to a good fight.

Stoic have resurrected a forgotten art when it comes to the combat in Banner Saga. There’s no 179,262.002 damage numbers. There’s no need. In fact it’ll take quite a while until any of your stats reach 20. Most of the strategy comes from the way damage is calculated. Strength – armour = damage. Simple. Except your strength is both your health and the damage you will deal. Don’t fix what isn’t broken.

This system regularly creates classic strategy dilemma moments that see you racking your brain figuring out what order to do things in or performing seemingly countless simple calculations. I might not do much damage but it might reduce the enemy’s strength enough that I take less damage and live to fight on. Plus if he damages me, I will do less next turn. Or I could hit the armour and then deal more damage. Or what if that guy with no armour gets in quick and reduces his health to save someone. It’s genius. It’s simple. It creates clever, chess-like moments and I love it. Pure strategy with all the showy stuff taken out. 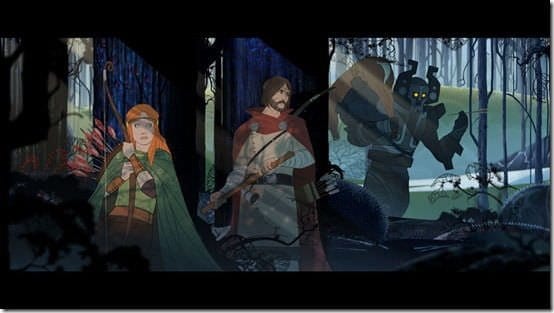 Simply put The Banner Saga is the best new strategy game I’ve been on since Xcom: Enemy Unknown. The turn based combat is a joy and the decisions you make on your quest are difficult. There’s nothing like picking between two (or five) impossible choices. And then being presented with 3 more. There’s enough depth to everything you do to give it a sense of consequence. It never patronizes and is confident enough with itself to treat you like an adult.

So confident in fact that the almost still images are enough to carry the whole thing without making you ever once feel like you need anything else. Admittedly that is in no small way due to the stunning artwork. But joining the beautiful images there is also a top-notch musical performance, yet again steeped in Viking goodness. If you like strategy games this is absolutely not something you can miss. An A-grade effort from Stoic and hopefully the first of many. The Banner Saga really doesn’t put a foot wrong.

phillvine
Phill has been the director of a small IT repair business since 2011 which he runs alongside studying for his degree in Information and Communication Technologies at the Open University. Video games are his real passion and they take up more of his time than he'd like to admit.
Previous articleNew Evolve artwork reveals Savage Goliath DLC, Pre-order Goodies
Next articleGuild Wars 2 begin with ‘Origins of Madness’