Call of Duty makes it’s debut on the the next gen with Ghosts; following it’s promising success on the previous set of consoles, it’s time to see what Infinity Ward and crew can accomplish with a meatier set of hardware. 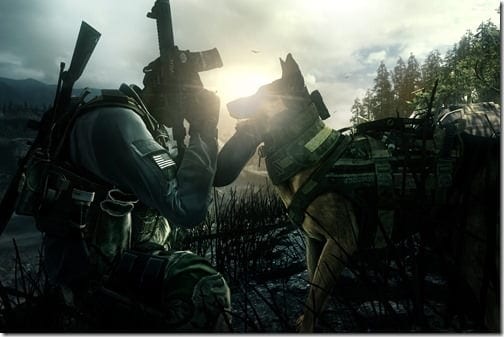 Jumping into the singleplayer, the immediate graphical differences are stark and plain to see. Somehow, sun glare has been improved for the next gen consoles, individual blades of grass are realised and the character models have been lavished in glorious textures. Nothing much else has changed however, you still meet David ‘Hesh’ Walker, your narrative anchor for the duration of the campaign and follow his destructive journey throughout his relationship with his brother and father. South America has risen up through it’s rich oil reserves, gotten a bit sick of America and launched a pretty destructive satellite assault upon the land of the free.

Taking approximately 8 hours to complete on a first run through, the campaign bombards you with explosions, set pieces, locales and a distinct lack of subtlety. On the PS4, the dramatic increase in fidelity immerses you further, screen shaking explosions rattle your overwhelmed brain with over indulgence. The few and far between, deliberately slow sections involving NPC’s add an extra layer of envelopment due to the added depth of facial details and expressions that, at times, felt strangely lacking on the preceding consoles.

The locales have probably seen the greatest improvements, floating through the barren, emptiness of space is unnaturally eerie and muffled; the same can be said for your sea faring escapades in the underwater sections, the inertia and momentum involved whilst navigating your way through the fabled ‘fish AI’ feels, sounds and looks fantastic. In contrast, the few pieces where you’re in control of the infamously destructive air support are about as brash and bombastic as you might expect, even if the bass and low end audio seems a tad lacklustre. Of course,detail and animation on our best friend Riley, the lovable attack dog, have also been increased with the hardware jump too, making the sections where he’s involved perhaps seem more emotional due to a more lifelike appearance.

Once you’ve blundered and staggered your way through to the end of the campaign, there’s unfortunately no real incentive to drag you back. Unlike Black Ops 2, there aren’t any branching storylines nor challenges to go back for. There are the obligatory collectibles to tediously scavenge along your journey but luckily, they are fairly limited in number if you fancy going on a Pokemon-esque hunt for them all. Considering the slightly predictable, throwaway plot, I will say I enjoyed my scripted romp through the campaign more than usual. Whether that be because it had spruced up graphics or perhaps because I couldn’t simply plough my way through with a target finding LMG, I don’t know. Either way, once the credits and compulsory ending scene had rolled past, I was left satisfied and relatively excited for a sequel. 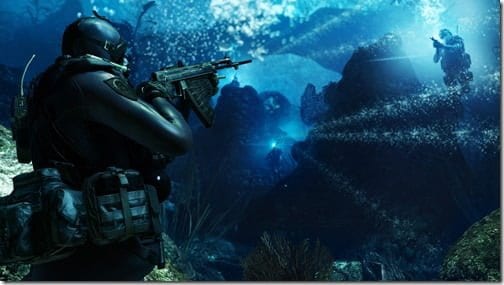 In an effort to claw some users back from the unrelenting zombies fanbase, Extinction has been introduced in Ghosts. With only the one map for the time being but more promised with future DLC packs, Extinction sees you performing an objective based, wave survival mode against aliens. A progression system involving creating a basic loadout with unlockable content gives you a real incentive to progress in this mode as opposed to restarting from scratch each time. In-game challenges ensure it doesn’t tire as quickly; seeing as you can actually complete it, (bring good teammates!) the overall goal hastens the pressure and desire to do well. Much like Treyarch’s counterpart, guns are available to buy and secrets can be found. Unlike Zombie’s, other things can also be bought with the money earned; dependant on your class loadout, you can deploy ammo packs, user controlled turrets and the like to hopefully make defending the interminable hive drill that bit easier.

Squads mode is the newly rebadged Combat Training from Treyarch’s previous offerings, for those who want some practice against the AI, fancy learning the maps or just to chill out without some high pitched screaming in your ears, Squads is for you. You can customise your team loadout before each match depending upon generally, how you wish your team to perform. Giving a teammate a long range rifle will make them more inclined to ‘camp’ and stick towards the edge of the map, whereas tooling your AI buddy up with a slew of perks and a knife will turn them into a veritable maniac. Unusually hidden away, is an incredibly fun survival mode against waves of AI. Teamwork, communication and sharing are the inevitable keys as rounds past 10 can get fairly hectic without knowing your comrades strengths and weaknesses.

Changing things up again; building upon Black Ops 2’s Pick 10 system, Infinity Ward has opted for largely the same idea, however instead of everything costing the same, the perks are valued differently upon their strength. Your primary weapon costs one point, you may equip up to two attachments for ‘free’ but after that, everything costs. Sidearms, explosives and tactical grenades can be deselected in favour of more perks and vice versa. With around 35 perks to choose from, it’s now more difficult than ever to make that perfect class. Weapons are now not unlocked via level progression but instead, solely by squad points, meaning you get more choice in weapon selection at the start. Being able to unlock the ‘final’ gun in a class after an hour or so of playing is empowering yet slightly overwhelming, however if anything, I still prefer the old ways in that respect.

Maps are huge, with even the smaller arenas rivalling previous Call of Duty’s ‘large’ maps. Having played it on both PS3 and PS4, the graphical improvements seem to be more of a necessity than a luxury. Picking out a player lying in a pile of heath with a thermal scoped sniper across the map can be incredibly difficult without the definition and fidelity of the newer hardware. Maps take precedence as the striking features as the difference is abrupt; much akin to a new glasses prescription. 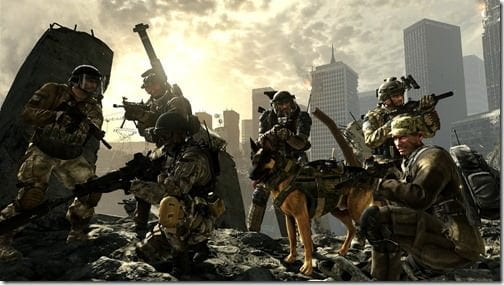 Aside from the graphical differences, the real lure of the PS4 version over the PS3’s is the addition of Ground War. Adding more players to the standard TDM and Domination playlists makes a surprising difference; three more players per side can tip the difference on the larger maps between boredom and action. The newer game modes such as Cranked and Blitz come at the expense of Capture the Flag and Hardpoint, yet with new playlists such as Heavy Duty (players get a little more health) being added via free patches, Ghosts’s life cycle looks promising.

For it’s first foray into the depths of next gen, Ghosts performs it’s duties quite well, whilst the lack of any radical changes may frustrate some, the alterations it does perform only shows promise of evolution. Niggles such as the lack of an in depth stats page outside of the game still annoy, as does the lack of a ping indicator and being able to ‘mute all’ in a pre-game lobby; these all seem like weird oversights. The promise of new content and weapons being added as DLC in the future nods to their commitment to improvement and I’m looking forward to seeing where the series can go if developed primarily for the now current generation.