Our favourite platforming duo return for the latest, and final, ‘future’ entry in the series for this generation. Do they have one more good adventure left in them, or will they simply fizzle out in their intergalactic swan song for the PS3? 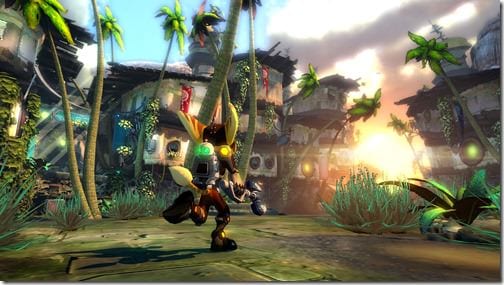 Ratchet and Clank’s journey starts out all too normally, despite obviously being an eyebrow-raising setup for disaster that is. Escorting the, villainous Vendra Prog to the Vartax Detention Center is the aim; all Ratchet and co have to accomplish is not getting ambushed by her nefarious twin brother Neftin Prog en route. Ah well, never mind, cue ensuing chase and capture plot!

After utilising your sparkling new Lombax approved gravity boots to escape from the aforementioned ‘situation’ you eventually get dumped on one of the games five planets to attempt to discover the whereabouts of your missing captive. From here on out, it’s back to basics with learning how to perform basic moves and combat roles with the diverse myriad of weaponry Ratchet can have at his disposal. Exploration for bolts is encouraged as they are the currency for purchasing new weapons; on top of this, raritanium, a much rarer resource is used to upgrade your arsenals effectiveness. Bolts are scattered around in much the same way as previous games as either a reward for killing enemies or in some of the liberally scattered, destructible crates that grace the map.

Upgrading your weapons is a must, as Ratchets basic melee attack will not only leave you vulnerable to attack from range, but it’s also pretty weak. Each weapon, on your first playthrough, will level up to a maximum of three via using it against enemies. Each level can give inordinate bonuses such as double damage; along with unlocking more options for the generic upgrades that require the fabled raritanium. Due to the simply insane amount of gloriously unique weapons on offer, that’s going to take some time! Along with some old favourites, some new additions have also made an appearance such as the Repulsor which is essentially a shotgun that can be upgraded to fire stasis like rounds that suspend enemies helpless in mid air. Other new toys to play with include a jack in the box themed Nightmare Box that scares enemies and focuses their attention for some time. Especially useful on the higher difficulties against the games later bosses. 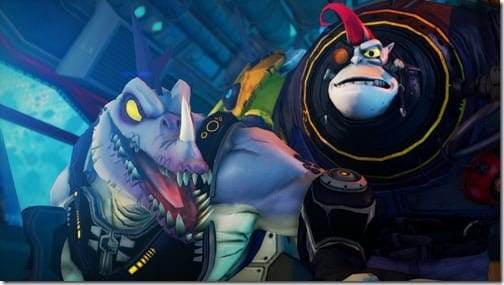 The jetpack makes a welcome return to help add some verticality to not only the platforming but the combat as well. Only available in certain, designated areas the jetpack gives a great amount of freedom to movement and exploration with it’s satisfying handling model. One of the planets let’s you use it liberally and entirely, save for refuelling. The all important controls are tight and responsive when platforming too, meaning it’s very rare that you miss a jump or fail to avoid a well telegraphed boss attack.

Puzzles now incorporate a new ‘portal’ style gun letting you target two available points and create a beam to bridge the gaps, not particularly taxing, but they do offer some respite from the constant fighting. Other puzzles use our much neglected friend Clank to participate in small 2D platforming sections where gravity can be manipulated using the right thumbstick. Navigating the small, maze-like areas can be potentially difficult with the many, often moving, hazards in your path. The goal being to guide him to a sleeping pink dog, punch it (don’t ask) and then hightail it back to the start whilst being chased by the understandably angry dog.

Not the longest game by any means, Ratchet and Clank took approximately 7-8 hours to complete, acquire all the ‘hidden’ collectibles and finish the arena mode. On my subsequent playthrough on the newly unlocked challenge mode, which is essentially a more difficult new game plus, I managed to complete it on hard in approximately 3-4 hours with very little stress. Having said that, I still haven’t levelled all the weapons to max, nor bought the super expensive final armour upgrade either, so there’s definitely still some incentive to go back, aside from it being just simple, unequivocal fun that is. 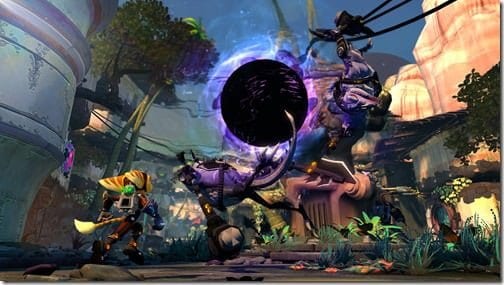 The visuals, art style, weapon and character designs are fantastic. In true Insomniac fashion, they’ve made a brilliantly welcome world with vibrant colours, unique villain character models and gloriously excessive guns to play with. Considering the amount of effects that can be going off on screen in any large battle, it’s impressive to see a game looking this pretty without sacrificing performance. The voicework and script work well if slightly lacking on the series trademark humour front; yet still manages to crack a smile from time to time.

If you’re a fan of the series, it would be a shame to pass this up, from cameos such as the largely useless Captain Qwark to the final level’s museum section, the love for the franchise is clearly evident. Being a budget title, the ride may be short and sweet, but it’s back to basics approach will not only entice old fans, but garner new ones in the process.

Reviewed on PS3, available only on PS3.

Out of the frying pan and into the fire.
Gaming

A new entry into the car combat / football...
Reviews