SQUARE ENIX and Crystal Dynamics have released a video for their forthcoming game Tomb Raider. This is episode 3 of the Guide to Survival and is called Survival Combat. 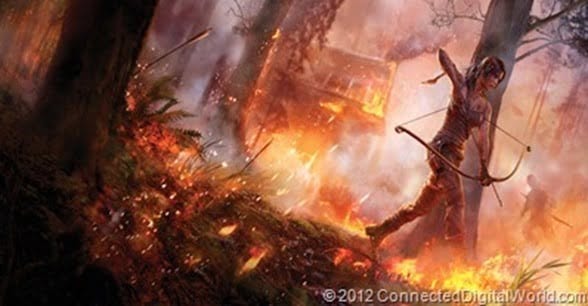 The first two episodes of Guide to Survival highlighted how an inexperienced Lara Croft must use her intellect and whatever she can scavenge to survive the harsh conditions of Yamatai. In this final episode we dig deep into Lara’s scrappy and raw approach to combat.

The elements aren’t the only thing after Lara on the island – predators come in both two and four-legged varieties. Lara’s unlocked skills and weapon upgrades culminate in her combat style, executed in both close-quarters and frenzied firefights.

Outnumbered and outgunned, stealth is frequently Lara’s strongest advantage. Approaching enemies undetected will allow her to pull of silent kills and keep fellow Solarii in the dark. The environment will also provide frequent opportunities for Lara to gain the upper hand. She must always be prepared to brawl up close, however, aided by dodge and counter moves and improved equipment. With wits and weapons combined, Lara is a smart and ultimately very dangerous fighter.

And here is episode 3:

I am a huge fan of the new Tomb Raider game, and can’t wait until March!

Check out our preview of Tomb Raider multiplayer

Check out our Exclusive interview with Darrell Gallagher from Cyrstal Dynamics

Check out our Exclusive interview with Meagan Marie from Crystal Dynamics

Andrew Edneyhttps://moviesgamesandtech.com
I am the owner and editor of this site. I have been interested in gadgets and tech since I was a little kid. I have also written a number of books on various tech subjects. I also blog for The Huffington Post and for FHM. And I am honoured to be a Microsoft MVP since January 2008 - again this year as an Xbox MVP.
Previous articleBig Update Coming Soon to Halo 4
Next articleApp Update: Netflix for iOS Updated to Version 3.0

Front Mission was a series that was pretty popular in Japan and did ok in other territories. Left Alive is a third person spin off from the Front Mission series, it's not a series I'm particularly familiar with so I'm hoping Left Alive will give me the encouragement to try it out.
Read more