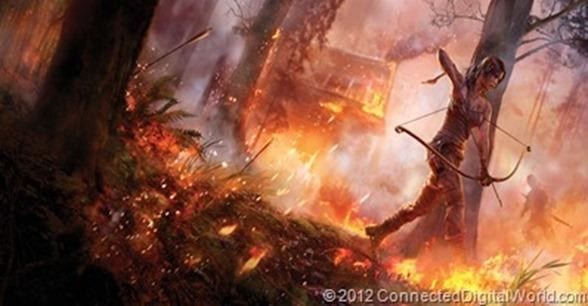 In the 4th episode of The Final Hours of Tomb Raider, Zachary Levi goes behind the scenes on one of the most radical additions to the Tomb Raider franchise, the addition of Multiplayer.

Zac travels to Montreal to sit and chat with some of the key team members from Crystal Dynamics about the rationale and direction for this new feature, and introduces you to the team from Eidos-Montréal.

The team talk about the core focus to ensure they injected attributes from the single player with a multiplayer twist, such as team survival, verticality and the inclusion of environmental threats.

Multiplayer in Tomb Raider sees the island’s indigenous Scavengers pitted against the crew members from the shipwrecked Endurance. Set in some of the island’s hostile landscapes, players will use traversal and hunting skills from single player, plus trap setting to create fast-paced combat in a selection of versus gaming modes.

I am a huge fan of the new Tomb Raider game, and you can check out both our preview of the first three hours of the game and also some new gameplay footage.

Andrew Edneyhttps://moviesgamesandtech.com
I am the owner and editor of this site. I have been interested in gadgets and tech since I was a little kid. I have also written a number of books on various tech subjects. I also blog for The Huffington Post and for FHM. And I am honoured to be a Microsoft MVP since January 2008 - again this year as an Xbox MVP.
Previous articleCES2013: Ford Announces Mobile Device App Development Initiative
Next articleNikon Unveils New Cameras at CES 2013