There have been lots of rumours and speculation about when Microsoft will be releasing Windows Phone 7.8 and now they have posted on their blog that its coming early 2013. 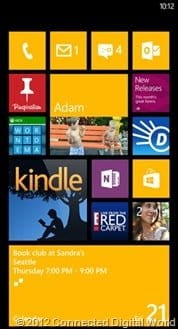 This is part of the blog post Microsoft put up yesterday:

But it’s not just Windows Phone 8 users that get to enjoy the new Start screen. As previously announced, with Windows Phone 7.8 we’re also bringing the feature to existing Windows Phone 7.5 devices. During the development process, I used builds of 7.8 on my Lumia 900 and it felt like a completely new phone: resizable Live Tiles totally change the way I do things, providing faster access to more of my favorite people, photos, and apps.

Windows Phone 7.8 also includes some other cool stuff. It doubles the number of theme and accent colors—to 20—so you can make your phone even more personal. There are also new lock screen features: the option to automatically display the Bing Picture of the Day plus the ‘A1B2C3’ PIN/password challenge to prevent accidental device wipes on phones connected to Exchange accounts.

And there are new apps coming for Windows Phone 7.5 and 7.8 customers. The hugely popular Words with Friends and Draw Something are already available, while Angry Birds Space and Angry Birds Star Wars are on the way.

New models running Windows Phone 7.8 are beginning to launch in many countries around the world, strengthening the ecosystem by bringing more Windows Phones to more people. These devices will typically be sold at a range of lower price points, meaning there will now be Windows Phones for everyone’s budget and need. This is incredibly important for broadening the reach of Windows Phone across the globe and ensuring we have the right product for every market.

Speaking of broader reach, Windows Phone 7.8 also expands the number of markets where customers can buy apps and use the Xbox service. Testing of this rollout is ongoing, but we’ve already managed to increase our global service coverage by over 30%, to 95 countries—a number that should continue to rise.

We know you’re eager to get the Windows Phone 7.8 update, and we want you to know that we’re working closely with our hardware and carrier partners to get it tested, approved, and rolled out to as many devices as possible in early 2013. As we work to quickly get this in the hands of our loyal users, we’re also striving to deliver a high-quality release and ensure a smooth transition for our widely expanded services.

Are you excited for Windows Phone 7.8? Let us know by leaving a comment below.

Andrew Edneyhttps://moviesgamesandtech.com
I am the owner and editor of this site. I have been interested in gadgets and tech since I was a little kid. I have also written a number of books on various tech subjects. I also blog for The Huffington Post and for FHM. And I am honoured to be a Microsoft MVP since January 2008 - again this year as an Xbox MVP.
Previous articleMicrosoft is Working on a New Operating System Codenamed ‘Windows Blue’
Next articleApp Update: Chrome browser for iPhone and iPad version 23.0.1271.91