UbiSoft has released a demo of their upcoming game Marvel Avengers Battle for Earth, now available for XBOX Gold members.  Read on for details.

UbiSoft has announced the current availability of a Kinect-enabled demo of Marvel Avengers Battle for Earth for the XBOX, currently available for Gold members and soon to be available generally.  Here is the announcement:

Today, Ubisoft announced that a demo for Marvel Avengers Battle for Earth on Kinect is now available to download worldwide for Xbox LIVE® Gold members, and will be accessible in one week for all members.

During the demo, players will travel back in time to the iconic tropical preserve The Savage Land, a hidden region surrounded by volcanoes and prehistoric creatures , for a single player ‘Best of 3’ battle to defend the Marvel Universe. Using their full body to punch, kick and dodge enemy attacks, players will unleash the devastating power of The Hulk and lay down the legendary Mjolnir (hammer) as Thor against the Super Villain duo of Captain America Skrull and Magneto.

Marvel Avengers Battle for Earth is the ultimate super hero brawler set in authentic comic book-style art environments based on the iconic Secret Invasion storyline. Battle for Earth provides endless entertainment through a variety of gameplay modes including co-op, campaign, arcade, challenges, versus and tournament. Fans will enjoy embodying their favorite Marvel super heroes or villains within the game including Avengers Captain America, The Hulk, Iron Man, Hawkeye, Black Widow and Loki.

Developed by Ubisoft Quebec, Marvel Avengers Battle for Earth will be released on Kinect for Xbox 360 video game and entertainment system from Microsoft on October 30th (North America) and Nintendo’s Wii UT system this Holiday. 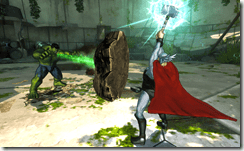 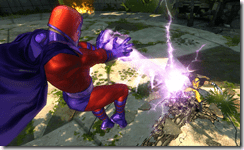 Check out a video trailer for the upcoming game here: