Recently at Gamescon, I got to play two levels on THQ’s forthcoming game Company of Heroes 2, and I was very impressed!

It is 1941 and the beginning of what will become the most brutal conflict of World War II, as Germany launches a full-scale invasion of the frozen tundra of the Soviet Union which would result in over 14 million military casualties. Take command of the iconic Soviet Red Army in brutal frontline warfare to free Mother Russia from the invading Nazis. Your strategic skills and tactical expertise hold the power to tip the very balance of this conflict in the sequel to the critically acclaimed and multi award-winning Company of Heroes. Engage in visceral tactical combat that will define you as a military leader and challenge you to wield the might of the Soviet Empire as you smash your way to Berlin. 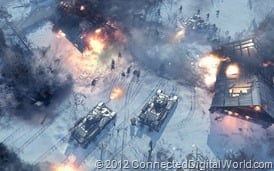 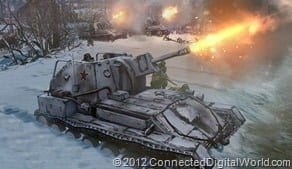 As a true sequel to Company of Heroes, this game moves the battle away from the common Western Front focus of World War II and refocuses on some of history’s most brutal and devastating conflicts on the Eastern Front, challenging players to take command of the iconic Red Army and repel the Nazi invaders from the very gates of Moscow. 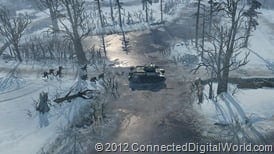 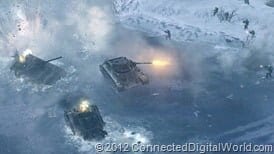 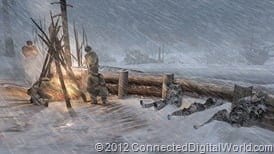 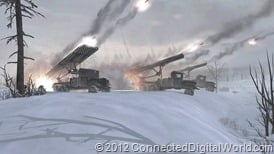 We were among a small group of people who were the first in the world to actually play it, so it was quite an honour. 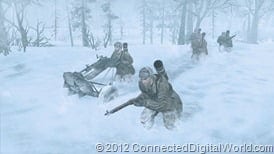 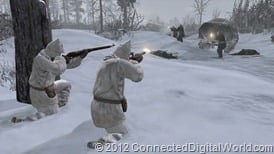 The game looked really good, and the Alpha code we were playing was only running on DX9, I can’t wait to see it running on DX11 when the game is released! Additional detail will include track deformation in the snow, and lots more!

There is a high level of environment destruction in the game – basically if it exists in the world, it can be destroyed, burnt down, smash a tank through it and more. 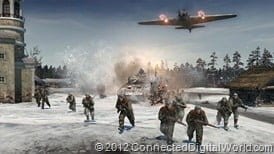 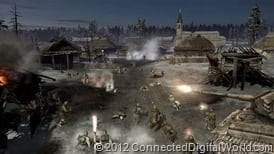 THQ have taken the time to live record every single weapon used in the game – so no stock audio effects here. They recorded audio of single shots, burst shots, being fire right next to the recorder and even from a mile away, so it really adds an authentic sound to the gameplay. 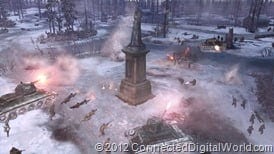 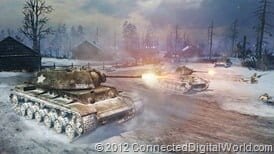 There are a number of new features in the game, including a line of sight featured called True Sight. In most games, your character has a “bubble” of sight around him and so he can see things, including what’s behind a wall if he walks up to it. With True Sight your view changes dynamically, so for example, if you drive up to a wall and you don’t have any troops the other side of the wall you won’t be able to see what’s beyond it. Also, if you set fire to a building, the smoke could blow in front of your troops stopping you from seeing properly, and you will have to wait until the smoke clears before being able to see what’s there. This makes the gameplay more interesting and means you have to think, and play, more strategically.

There is also a dynamic weather system called ColdTech. As weather played an important roll in the Eastern Front, for example, in the Winter of 1941, the weather reached –41 degrees, which was cold enough to freeze fuel in vehicle fuel lines. Weather is effectively a “third player” in Company of Heroes 2. There are blizzard conditions in the game, and you will have to keep your men warm or they will get colder and colder and eventually get hyperthermia and die. There is also dynamic snow, with the ability to layer on and remove snow as needed for the level. The snow in this game actually has depth – for example running through deeper snow will slow down your troop movement. You can even use snow for cover, and melt or destroy snow to get at your enemies.

There is also ice which has different textures. Vehicles on the ice will actually slip and slide on the ice, and you can even crack or destroy the ice as needed. The heavier the vehicle the more damage is inflicted about the ice. For example, if you drive a tank across some ice, you will actually see the ice cracking around the tank! The more pressure you put on the ice, the more likely it will break, so be careful! Ice can also refreeze – so if it is really cold the river will freeze and the cracked ice will refreeze. 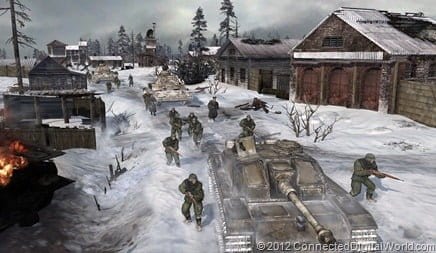 We got to play two missions in the game, lasting about 90 minutes. We got to see two very different maps and thus two different ways of playing the game. The graphics and sounds were fantastic, and the ColdTech weather system really makes it a different game. I figured I could just move a large group of my men across the map and ignore the cold – that was a big mistake – only 2 men actually got to where I sent them, and they were almost dead!

You really do have to think strategically in this game – but not to the detriment of the gameplay. I found the game easy to control once I got the hang of it.

I was really impressed with Company of Heroes 2, and in fact, I wanted to play more. I guess I will just have to wait until nearer the release date, and I can’t wait to see how much difference playing on DX11 will be, because even on DX9 the game looked fantastic.

Company of Heroes 2 is scheduled to be available for PC in early 2013. For more information check www.companyofheroes.com . This is definitely on my must have games list for 2013!

Check out the trailer video below:

What do you think of Company of Heroes 2? Let us know by leaving a comment below.

Andrew Edneyhttps://moviesgamesandtech.com
I am the owner and editor of this site. I have been interested in gadgets and tech since I was a little kid. I have also written a number of books on various tech subjects. I also blog for The Huffington Post and for FHM. And I am honoured to be a Microsoft MVP since January 2008 - again this year as an Xbox MVP.
Previous articleSamsung announces the Galaxy Player 5.8
Next articleHands-on with the Mad Catz S.T.R.I.K.E.7 Professional Gaming Keyboard