Brian has just released My Movies for Windows Media Center version 4.03 taking it out of beta. 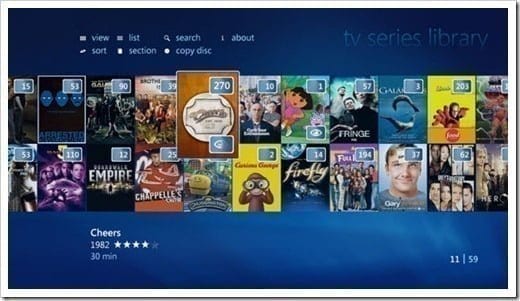 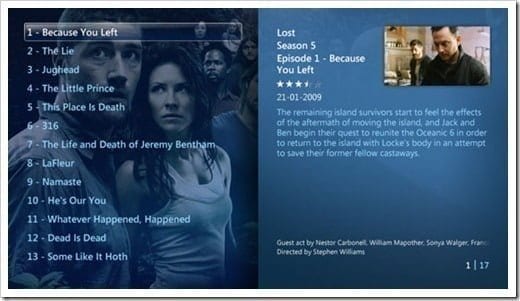 Added: If a directory contains a “Trailer” or “Trailers” subfolder, the trailer will automatically be loaded from this directory. If there are multiple trailers, all are played as part of a playlist.
Added: Option to add directly to a category from the movie details page.
Added: PowerDVD 12 added to external players.
Added: Data service API function to retrieve data in external applications.
Added: Feature table dialog for users with less than 2500 points.
Added: Meta-data storage for JRiver MediaCenter (500 points required).
Added: New Media Player Classic Home Cinema edition with updated path.
Added: Option in “Movies” settings section in WMC to hide offline play options on playback if there are online play options.
Added: When you change episode paths, it now checks if other paths are changed as well.
Added: Sort saving for title list in the Collection Management dialog
Added: Box sets are now contributed to the online service, and can be added as full boxes from service. Please pay attention to new guidelines for contributing Box Sets: /how-to/written-documentation.aspx?Page=Contributing%20Box%20Sets.
Added: Automatic refresh rate changing (Requires 2500 points). Please read details on http://kb.mymovies.dk/KnowledgebaseArticle50076.aspx. We would like your inputs on how this works on your setup.
Added: Meta-data storage for MediaBrowser (Requires 500 points).
Added: Option to log in with Facebook.
Added: Backdrop fade in time configuration added to Windows Media Center settings.
Added: The system will now check media info for titles where the information for some reason could not be read at the time the title was added or edited
Added: Show digital copy information in HTML preview.
Added: Image contribution number on banners, posters and backdrops of TV Series.
Added: GetTitlePlayOptionsForDune API call.
Added: Data service command to start Windows Media Center.
Added: TIFF besides TIF as cover file option.
Added: Remote Server API functions for Windows Media Center music control.

Change: Ignore “Trailers” and “Trailer” directories in folder monitoring.
Change: The remote server is now prepared to be open for third parties.
Change: Online collection link to new URL.
Change: Changed Server and Standalone installations on Windows 8 to be based on SQL Server 2008 R2 rather than SQL Server 2005, which have compatibility issues.
Change: Internal replacement of menu and toolbar components.
Change: Event handling functionality now requires 2500 points or integrator license.
Change: Added functionality for folder monitoring to recreate watchers if they get lost due to host reboots.
Change: Some internal component parts where replaced with others for the UI in Collection Management.
Change: Different handler for DVP-CS777ES disc changer.
Change: Filter limitation removed from Collection Management, and now only applied in Windows Media Center.
Change: All titles are no counted, even box set container titles.
Change: Better handling of database upgrades, so that later versions does not need all clients to be upgraded when server is upgraded.
Change: Do not include series/box container title in Media Center option deprecated, is now always true.
Change: “Is Box Set” checkbox removed, and box sets moved up under global data rather than personal data, as preparation for upcoming box set functionality.
Change: Show digital copy in HTML preview.
Change: Media Center Background service updated to later API version

Fix: Error was generated when pressing OK in export to android without a target destination.
Fix: Minor error generated when selection change in title list hit a title without a media type.
Fix: Issue with ignore file check that could go down one folder too many, causing a delay in import on some setups.
Fix: Issue that could cause slow import times on Windows Embedded.
Fix: Search did not function properly on TV Series in non-English languages.
Fix: Issues with folder monitoring when running against a My Movies server as standalone.
Fix: Installer issue on Windows 8.
Fix: Dune issue that could cause an empty playback on local drives.
Fix: DVD chapters structure was not set in the order specified by the PTTs on the disc.
Fix: Blu-ray’s without AACS was not identified as valid Blu-ray’s.
Fix: Special sized DVD’s did not copy correct with AnyDVD.
Fix: There was a problem with categories loading when browsing a local drive.
Fix: There was a problem with the 3D Blu-ray icon.
Fix: RS-232 changer could load disc in wrong changer.
Fix: Increased waiting time for RS232 changer, solving a problem where it would not play a requested disc.
Fix: Title synchronization could fail in some situations due to an invalid date.
Fix: Attempt to clean memory better when building Dune index.
Fix: Changed how directory content was checked for being in use. It could cause media info to not be read on some files transferred to another server.
Fix: An issue with an already open database connection when updating backdrops.
Fix: Issue could occur with HD DVD file structure playback if different players were set for HD DVD and Blu-ray file structure.
Fix: An error could occur saying that you do not have player capable of playing Blu-ray or HD DVD file structure, even when you have.
Fix: The sort title box was not limited to 100 characters as it should be.
Fix: Minor fixes to better handle non-AACS Blu-ray’s.
Fix: TV Series on Discs did not always have their episode coupled to owned episodes.
Fix: Double click on an episode on the season listing under a disc title now jumps to the right episode.
Fix: “Online titles” option did not include titles of type Online (Folder Content).
Fix: Issue with TV Series on DVD and category list.
Fix: SageTV properties file could continue to be stored by folder monitoring.

Various other minor fixes and changes.

Andrew Edneyhttps://moviesgamesandtech.com
I am the owner and editor of this site. I have been interested in gadgets and tech since I was a little kid. I have also written a number of books on various tech subjects. I also blog for The Huffington Post and for FHM. And I am honoured to be a Microsoft MVP since January 2008 - again this year as an Xbox MVP.
Previous articleWaterfield Designs CitySlicker MacBook Air case review
Next articleMy Movies for Windows Home Server 2011 Version 2.11 final released

MARVEL have truly managed to make even a trailer...
Gaming

If you love relaxing puzzle games with beautiful illustrations, then Mosaic Chronicles is the perfect game for you!
Christmas 2021

Spoil the gamer in your life