Tonight in London ZTE announced their next smartphone, the Android 4.0 based ZTE Grand X and CDW were on hand to cover it. 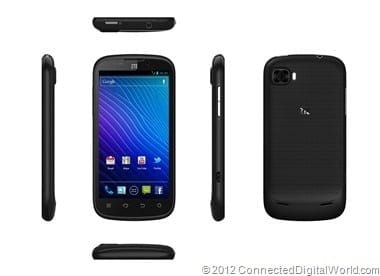 The ZTE Grand X incorporates a variety of connection capabilities including Bluetooth, WiFi and DLNA which enable users to share content across multiple devices such as TVs and displays, printers, cameras, and other mobile and multimedia devices. The smartphone also allows users to capture, play and share content using the HD video capability.

ZTE will be showing off the Grand X at the Westfield Startford Olympic area as part of their ZTE Grand Xperience, giving people the chance to see and try one for themselves.

ZTE are aiming the new phone at 18-35 year olds, and as such has teamed up with Professor Green to promote it, so expect to see lots of posters and advertising!

Virgin Media will offer the ZTE Grand X on prepay for £189.99, or on contract from £24 a month all the way up to £37 depending on your chosen package. Phones 4u have yet to release their pricing, but expect that any time now.

The ZTE Grand X will be available sometime during August.

We got some hands-on time with the phone tonight, so expect that shortly.

Andrew Edneyhttps://moviesgamesandtech.com
I am the owner and editor of this site. I have been interested in gadgets and tech since I was a little kid. I have also written a number of books on various tech subjects. I also blog for The Huffington Post and for FHM. And I am honoured to be a Microsoft MVP since January 2008 - again this year as an Xbox MVP.
Previous articleWindows 8 To Be Available October 26th, 2012
Next articleLights-Out Beta for Windows Server 2012 Essentials

Wales Interactive, acclaimed for its FMV games and narrative-driven...
Gaming

If you’re looking for a fast-paced action game, then get ready to join the battle in Worms Rumble as you blast your way to victory.
Events

EGX2021 is a slow-burner but it's still worthy of your time.