In the next in the long series of Building Windows 8 articles, Microsoft talks about designing the Windows 8 touch keyboard. 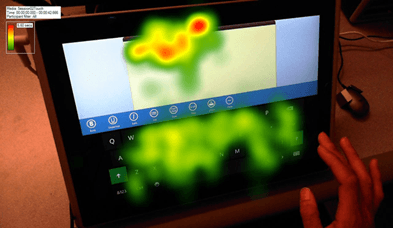 This is how the article starts:

When we began planning how touch and new types of PCs might work on Windows 8, we recognized the need to provide an effective method for text entry on tablets and other touch screen PCs. Since Windows XP SP1, which had Tablet PC features built in, Windows has included a touchable on-screen keyboard. But those features were designed as extensions to the desktop experience. For Windows 8, we set out to improve on that model and introduce text input support that meets people’s needs, matches our design principles, and works well with the form factors we see today and expect to see in the future.

I’m writing this blog post on our Windows 8 touch keyboard using the standard QWERTY layout in English. As I look at it, the keyboard seems very simple and sort of obvious. This comes partly from having worked on it for a while, but also because keyboards are familiar to us. But there is more here than meets the eye (or, fingertips).

We started planning this feature area with no preconceived notions. As we do with all our features, we began the text input design project with a set of principles or goals. On a Windows 8 PC using touch, we want people to be able to:

You might note that none of those goals explicitly assumes a keyboard. And when we started the project, we cast a broad net across possible approaches to text input. We found that of all the methods of text input we considered, none met the goals above as well as a keyboard. The majority of people are simply faster, more accurate, and more comfortable typing than they are writing any other way. Windows has highly accurate handwriting recognition in several languages, as well as advanced speech recognition, for example. But without a great touch keyboard, we were not going to be able to fulfill people’s needs and expectations for touch-screen devices running Windows. So we set out to create the best touch keyboard on any device.

It’s very interesting to see that Microsoft are expecting, in my opinion, that there will be a lot of touch users with Windows 8. While I think Metro works so much better on a touch screen device, not a lot of people currently have one, so it will be interesting to see what happens in October.

Andrew Edneyhttps://moviesgamesandtech.com
I am the owner and editor of this site. I have been interested in gadgets and tech since I was a little kid. I have also written a number of books on various tech subjects. I also blog for The Huffington Post and for FHM. And I am honoured to be a Microsoft MVP since January 2008 - again this year as an Xbox MVP.
Previous articleSky’s NOW TV app for Android released, doesn’t support Ice Cream Sandwich yet
Next articleD-Link Ships its First 802.11ac Router, the Cloud Router 5700

After a year of lockdown restrictions and, let’s be honest, not much opportunity to have a good old knees-up, Monkey Shoulder has released a spirit lifting multi-player game, Cards For Hilarity, to inject some much-needed laughter back into 2021.
News

By the time I was finally able to secure...
Gaming

In the run up to the global launch of...