Nokia announced today that the new Nokia 808 PureView is now available to pre-order from Amazon and will be shipping at the end of June. 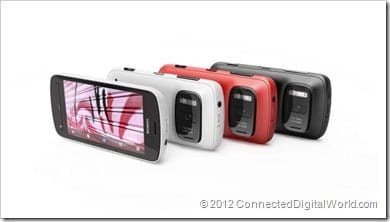 The Nokia 808 PureView boasts an impressive 41 megapixel sensor and Carl Zeiss optics and is the first smartphone to feature Nokia’s award-winning PureView technology, which represents not only Nokia’s but the industry’s highest level smartphone imaging experience.

Since it was announced in February, the Nokia 808 PureView has received multiple awards, including Best Mobile Device at Mobile World Congress 2012, as well as an award for Best Imaging Innovation for 2012 from the Technical Image Press Association (TIPA).

“PureView has completely raised the bar on imaging performance for the whole smartphone industry – and Nokia is not stopping here,” said Jo Harlow, Head of Smart Devices at Nokia. “We’re going to carry on developing PureView for our future smartphones in ways that will again revolutionise the imaging experience.”

The Nokia 808 PureView features a large, high-resolution 41 megapixel sensor with high-performance Carl Zeiss optics and new pixel oversampling technology. At standard resolutions (2/3, 5 and 8 megapixels) this means the ability to zoom without loss of clarity and capture seven pixels of information, condensing into one pixel for the sharpest images imaginable.

At high-resolution the Nokia 808 has the ability to capture an image, then zoom, reframe, crop and resize afterwards to expose previously unseen levels of detail. With superior low-light performance and the ability to save in compact file sizes for sharing in email, MMS, and on social networks, the Nokia 808 PureView makes it possible for anyone to capture professional looking images in any conditions.

Andrew Edneyhttps://moviesgamesandtech.com
I am the owner and editor of this site. I have been interested in gadgets and tech since I was a little kid. I have also written a number of books on various tech subjects. I also blog for The Huffington Post and for FHM. And I am honoured to be a Microsoft MVP since January 2008 - again this year as an Xbox MVP.
Previous articleCamilla Luddington announced as the voice of Lara Croft in new Tomb Raider game
Next articleThe Dawnguard add-on for Skyrim is now available to buy

Here is our review of the SwitchBot Curtain.
Gaming

A deep and furry Visual Novel.