Plex for iPhone and iPad updated to v2.4

The Plex application allows you to use your iPad, iPhone or iPod touch to browse and play your media (video, photos and music) using the Plex Media Server installed on your Mac or PC. The latest version, v2.4, has just been released in the App Store. 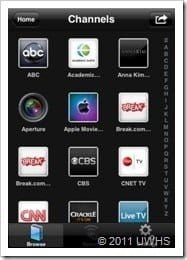 Plex for iOS brings the power of Plex to your iPad, iPhone or iPod touch. With Plex, you can stream your music, videos and photos from your home computers running Plex Media Server (available from http://www.plexapp.com/) and access content from a wide range of channels.

Channels are available for apps like Aperture, iTunes and iPhoto, or online services like YouTube, Vimeo and Revision3. There’s also a remote control feature for Plex Media Center.

Additionally, you can sign up for the myPlex service, which lets you connect to servers shared with you by your friends, queue videos from your web browser to watch later, and connect to your Plex Media Server at home wherever you are in the world via Wi-Fi or a celluar connection, with no configuration necessary!

Plex Media Server streams your media directly from your computer, so there’s no need to convert before viewing. Plex is smart, too – if your media isn’t already in a format your device can play, it’ll convert it on-the-fly.

∙ NEW: Social features! You can now add friends to your myPlex account, recommend media to each other, and post directly to your Facebook timeline. Tap account settings and go to the friends tab to send out friend invites.
∙ NEW: Ability to clear cached images.
∙ NEW: The app can be launched via the plexapp:// URL scheme.
∙ NEW: Media can be deleted from the app (must be enabled on the server, requires PMS 0.9.6.1 or newer).
∙ NEW: Automatic video quality adjustment has been restored, allowing the app to select the most appropriate video quality for the current available bandwidth, up to a user-defined maximum.
∙ NEW: Attempt to automatically select audio & subtitle streams for all parts when playing stacked media.
∙ NEW: Networked logging option (in advanced settings). Sends iOS and PMS logs to a centralized server in the cloud when enabled, to aid with support.
∙ NEW: A new look for settings.

Andrew Edneyhttps://moviesgamesandtech.com
I am the owner and editor of this site. I have been interested in gadgets and tech since I was a little kid. I have also written a number of books on various tech subjects. I also blog for The Huffington Post and for FHM. And I am honoured to be a Microsoft MVP since January 2008 - again this year as an Xbox MVP.
Previous articleStableBit DrivePool for Windows Home Server 2011 Beta 1.0.2.6278 released
Next articleSonos beta testing new controller applications and are looking for testers

The war genera is one of the most heavily delved upon topics in the video game medium, with World War II in particular being adapted to the video game format more times than I can count.

You play as Skul, the titular hero and meager skeleton, who would be nothing more than a forgettable enemy in most games. Here, though, Skul has been refashioned into a proper hero replete with magical abilities and enchanted items. And revenge against the usual protagonists feels so good.

A familiar tactical RPG where you must take on the Reaping and survive.

Here is our review of the Ninja Foodi 9-in-1 Multi-Cooker.

A fast-paced and hectic bullet hell game awaits anyone who takes on this retro sequel.

Here is our review of the Ninja Foodi 9-in-1 Multi-Cooker.
Read more
Gaming

Ray’s The Dead is a 1980s-inspired zombie action-strategy-puzzle game developed by Indie developer Ragtag studio with an impressively meagre $50,000 via Kickstarter and, after a turbulent 6-year development and repeated delays, was eventually released (or escaped) in October 2020.
Read more