The Dragon Dictation app for the iPhone and iPad has just been updated to version 2.0.17. 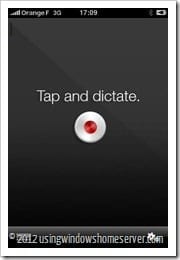 Dragon Dictation is an easy-to-use voice recognition application powered by Dragon NaturallySpeaking that allows you to easily speak and instantly see your text or email messages. In fact, it’s up to five (5) times faster than typing on the keyboard.

With Dragon Dictation you can also update your Facebook status, send notes and reminders to yourself, or Tweet to the world….all using your voice. So when you’re on-the-go, stop typing and start speaking – from short text messages to longer email messages, and anything in between. For best result, speak calmly and clearly.

• Voice-to-text transcriptions that may be sent as SMS, Email, or pasted into any application using the clipboard
• Submit update to Twitter & Facebook
• Convenient editing feature that provides list of suggested alternatives
• Voice driven correction interface

Andrew Edneyhttp://moviesgamesandtech.com
I am the owner and editor of this site. I have been interested in gadgets and tech since I was a little kid. I have also written a number of books on various tech subjects. I also blog for The Huffington Post and for FHM. And I am honoured to be a Microsoft MVP since January 2008 - again this year as an Xbox MVP.
Previous articleUpdate on BlackBerry Business Cloud Services for Microsoft Office 365
Next articleMicrosoft Talks Windows 8 File Management Feedback