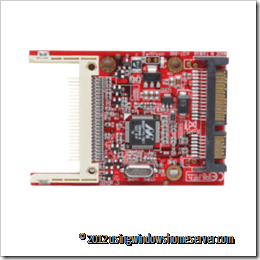 Compact Flash memory cards are small mass storage devices. About the size of a matchbook, these solid state drives provide reliable, removable mass storage for portable devices such as cameras and PDAs. MicroDrives are hard disks that have applications similar to Compact Flash cards and are designed to fit into a CF Type II slot.

The Compact Flash to SATA Adapter is ideal for use with a laptop or with selected Aleratec HDD Duplicator s. It converts a Compact Flash memory card (Type I/II) or IBM Microdrive media to a low power, high performance 2.5” SATA hard drive. It supports any size compact flash card up to 2TB.

The Compact Flash to SATA Adapter allows your CF memory card to be the primary boot device containing the operating system and applications. It supports DMA and Ultra DMA. It supports Windows, Mac, and Linux. No drivers are needed.

Aleratec HDD duplicators are an essential tool for building and upgrading computer systems. The Aleratec Compact Flash to SATA Adapter expands the functionality of these already vital tools.

The Aleratec Compact Flash to SATA Adapter is compatible with the following Aleratec hard disk duplicators:

The Aleratec Compact Flash (CF) to SATA Adapter 2-Pack is available for shipment now with an Estimated Retail Prices (ERP) of $49.99 and is available from Aleratec’s dedicated resellers and distribution partners.

I got to spend some time at CES with Aleratec, and they discussed this product, along with a number of others with me – more on those soon. 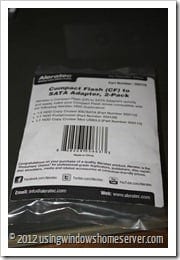 Andrew Edneyhttps://moviesgamesandtech.com
I am the owner and editor of this site. I have been interested in gadgets and tech since I was a little kid. I have also written a number of books on various tech subjects. I also blog for The Huffington Post and for FHM. And I am honoured to be a Microsoft MVP since January 2008 - again this year as an Xbox MVP.
Previous articleMicrosoft Release Hotmail App for Kindle Fire
Next articleHP ProLiant MicroServer N40L for $289.99 on Amazon