Do you have a PC that needs a Restore from Windows Home Server 2011 but the PC cannot find the network or the server? If you have another computer on the network, and a USB enclosure, you can perform the Restore and then put that drive in the PC that needed the new hard drive. Check out our video on the process!

Fellow BYOB podcaster Michael Faucher called me a few weeks ago saying his new Sandy Bridge PC was not finding the network during a PC Restore. We had performed Restores before with the Client Restore Wizard in WHS v1, but he had backed up this PC to his Windows Home Server 2011. Since the motherboard was so new we figured there was an issue with drivers. Whatever the reason, it did not work. What’s a boy to do?

Again, Faucher and I had performed Client Restores before with WHS v1 but we had not done one with 2011. Since we could not locate the 2011 Wizard on the client we tried a Restore with the Dashboard. It failed. No System Reserved partition access. The disk was not bootable. Ugh.

As of 12-APR-2011, I have still not been able to create a bootable Restored disk with the 2011 Dashboard. If you have had the same results, a bug has been filed so vote it up!

Mental Note: You must copy the entire folder to your PC so you can perform the Restore. You must also copy the folders to a PC that is already “connected” to the WHS 2011. 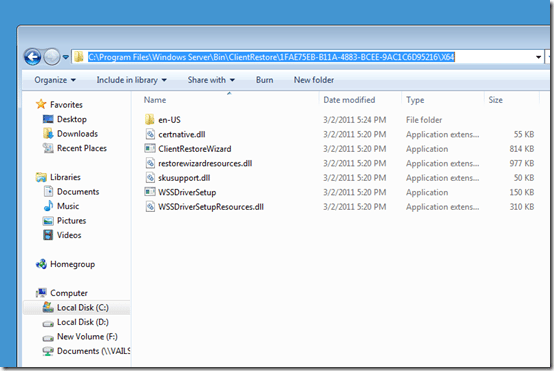 Check out the short video to see how easy the process is.

How Do I Connect A Hard Drive?

I have performed this type of Restore before with a Windows Home Server v1.

It is an easy Restore with either version and I would strongly suggest that anyone interested in doing a Restore this way buy an enclosure ahead of time BEFORE you really need it!

One of the easiest and cheapest 2.5” enclosures I found is at:

Of course you can perform a Restore with a SATA dock or even by connecting the new hard drive directly to your motherboard.

With the hotly anticipated release of Blade Runner 2049 set to hit the big screens in October, The Folio Society has been in the process for two years creating a two title combination of Philip K Dick’s outstanding Sci-Fi novels, landing ahead of the film release.
Read more
Movies & TV

In Lucasfilm’s Star Wars: The Last Jedi, the Skywalker saga continues as the heroes of The Force Awakens join the galactic legends in an epic adventure that unlocks age-old mysteries of the Force and shocking revelations of the past.
Read more
Movies & TV

“Prison Break” returns as a special event series with its most adrenaline-fueled storyline ever!
Read more