Video Signal, Connectors and Cables – A Supplement to BYOB #30

In BYOB podcast #30 we talk about video connectors and discuss all of the detail you need to know when connecting a monitor to your PC. There are once again many terms in this sermon so grab this post so you can follow along and see if your system is optimized and find out what cables are right for you. 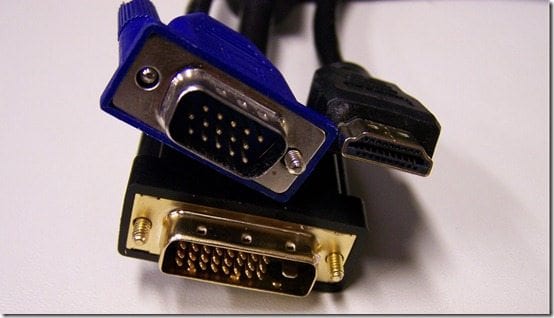 The BYOB Podcast #30 can be found at:

Introduced in 1987, the Video Graphics Array connector (or VGA) is the standard blue 15-pin connector we have all dealt with. It has also been called RGB, D-sub or “that blue cable”. The VGA cable supports resolutions from 640×400 to 2048×1536. With the right equipment, you might be able to pinch a little more res out but that is infrequent. A VGA connection is ANALOG and cable lengths are good up to 25-30 feet.

VGA has grown with resolution over the years. You may have heard terms like VGA, SVGA, SXGA, HDTV and WUXGA but these all just define the vector (resolution) of the signal. For PCs, we do not typically use this rating but this comes in to play when looking at projectors given that there native resolution is frequently considered important.

VGA is to be phased out by 2013 but I am sure support will be around for years after.

Introduced in 1999, the Digital Visual Interface (or DVI) is the 29-pin connector that came after VGA. It has been called DVI-DVI-D, the “white one” connector or I. This connector is digital, which means that data is transmitted and is not affected by noise or distortion. Something else to consider is that when your display is on its native resolution the DVI the source is based on each pixel on the monitor.

When you use a VGA connector, the pixels are not individually lit and the lit pixels are affected by other pixels. For those of you with two monitors, one on VGA and one on DVI, you will notice the DVI looks slight more crisp. This signal is reason behind that. If you have a card that has VGA, DVI and HDMI try to not to use the VGA and get an adapter for the HDMI. You will get better results.

Now, as far as the resolutions for DVI, you need to understand single and dual DVI links. Look at your DVI connector and if there are missing pins in the middle then it is a single link DVI cable. Single link is most common and you should be ok with that cable for now.

Just as an FYI, the DVI connector includes pins for analog signal, which is how you can use one of those adapters to go to VGA.

There is also Display Data Channel (or DDC or DDC2) on pins six and seven that have information that tells your PC the type of monitor it is. Modern VGA cables also have DDC/DDC2. This ID data is how your PC knows the type and resolution and what drivers to get for your monitors. As a recap, six pins are for data, six pins for analog signal, six pins for data two, five pins for monitor data and six for shield.

DVI cable lengths are good to 15 ft. at 1080 while you can go longer with lower resolutions or by using a booster.

DVI is a great connector but since it does not include audio, it is losing out to HDMI.

Timothy Daleohttp://usingwindowshomeserver.com
Timothy Daleo is a Project Resource Analyst and Oracle Applications Trainer in Pasadena, California. In addition to financial analysis, Tim has been developing training materials since 2003 and supporting direct projects through various auxiliary databases since 2005.
Previous articleHands On Review of the Synology USB Station 2
Next articleNewerTech Launch eSATA to USB 3.0 Adaptor