Square Enix revealed that Marvel’s Avengers: Earth’s Mightiest Edition and Deluxe Edition will be available alongside the Standard Edition on September 4, 2020. Further, players who pre-order any version of the game will receive guaranteed access to the Beta (at participating retailers), a Marvel Legacy Outfit pack, and an exclusive nameplate. 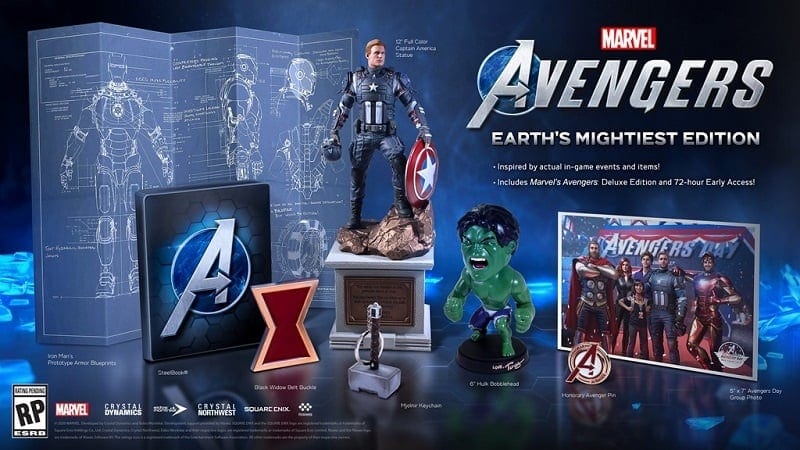 At participating retailers, those who pre-order Marvel’s Avengers will receive either a limited-edition pin set, patch set, digital comic book, or SteelBook designed by legendary Marvel artist Mark Brooks. The company also kicked-off its pre-order program today, which includes guaranteed access to the Beta, an exclusive nameplate, and a Marvel Legacy Outfit pack. These Marvel Legacy Outfits are inspired by moments from the comics that defined who each Super Hero was as they first embraced their powers to become the icons they are today.

In addition, players who pre-order their copy of Marvel’s Avengers from the PlayStation Store will receive additional pre-order bonuses, including a Ms. Marvel “Talk to the Hand” emote and “Marvel’s Avengers: Hex Pattern Logo” dynamic theme. The exclusive Digital Edition on the PlayStation® Store includes an exclusive Ms. Marvel nameplate and 1,000 credits which can be used towards Super Hero customizations. This edition also includes 72-hour early access when the game launches in September. PlayStation 4 players can also play the beta first when they pre-order any edition on PS4.

Marvel’s Avengers will release simultaneously for the PlayStation 4 , Xbox One, Stadia, and PC on September 4, 2020. The game is currently rated RP, rating pending by the ESRB.

Sean McCarthy
Freelance writer but also a Gamer, Gooner, Jedi, Whovian, Spartan, Son of Batman, Assassin and Legend. Can be found playing on PS4 and Xbox One Twitter @CockneyCharmer
Previous articleDirector Matt Reeves Reveals the New Batsuit for ‘The Batman’ Film
Next articleFor Honor to Celebrate 3rd Anniversary with ‘the Honor Games’ Event

2K games has made the announcement that...
Read more
Gaming

At the last 'Inside Xbox' event, third...
Read more