Zombie stomping is a very popular game type in video games whether it has you trying to survive the Zombie apocalypse or trying to prevent one. They can be very tense affairs or they can go full on arcade, but the one game I had not expected to feature the recently raised from the dead and searching for human flesh to eat was the Sniper Elite series and their spin off Zombie Army 4: Dead War ticks a whole lot of boxes and is a surprising brilliant game to play.

I love the Sniper Elite series with the meticulous planning of assassinations and covert missions set during World War 2, taking my time to make sure my long-range sniper shot was masked by the sound of an overhead plane or land vehicle going past. I would take my time to make sure I remained undetected throughout the mission, even starting all over again if I had messed up, it is a series that rewards my patience with attention to detail skills.

Zombie Army 4: Dead War is certainly none of the above and is set in a very different kind of game world where stealth really is not an option and being loud and in your face is just as satisfying for me. To set the scene for this series which is a spin off from the Sniper Elite series, the year is 1946 and following the allied forces having defeated Hitler and his Nazis, in a last gasp move Hitler casts a demonic spell which results in the raising of the dead of both armies giving him an undead horde to spread out across the world in his need for world domination. In the last game, a team of heroes managed to send Hitler into a hell dimension hoping that this would break the Zombie raising spell but instead, it only left the zombies leaderless and even more dangerous as they continue to spread across Europe. Now the new war is against the undead and it is up to you to beat the Zombies back. 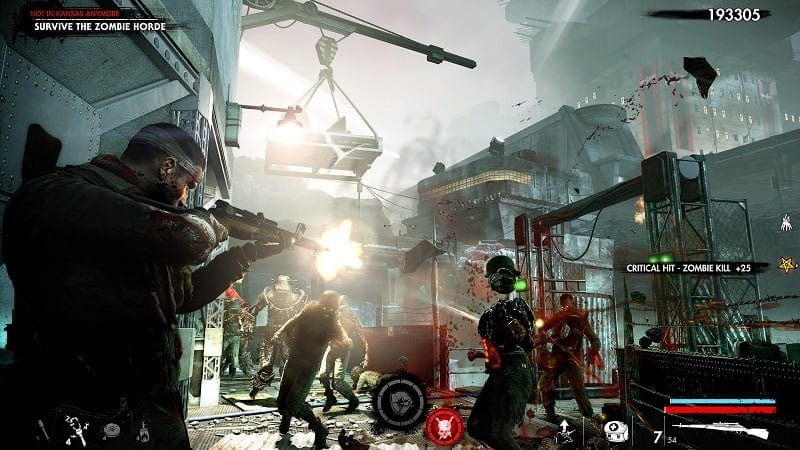 I absolutely adored this game which is surprising considering it is the total opposite of what I love about the Sniper Elite series. This is arcade Zombie smashing at its best for me and boy does it deliver at throwing huge numbers of Zombies at you in a World War Z kind of way. Everything about this game is about trying to slice your way through a constant supply of the undead and delivers it in a very gratifying package. It has a full story campaign with both solo and co-op modes with co-op being up to 4 players taking on missions with the action scaling depending on how many is in your team, so if you have 2 or more you will end up facing more Zombies than if you were to play it solo but then even playing on your own the game still throws an abundance of the undead at you to keep the action thick and fast.

The arcade style gameplay is really the selling point for the game for me, taking the fun aspect from Sniper Elite such as the fantastic X-ray kill shot animations which believe me, getting a cracking x-ray animation from getting a headshot on a Zombie, a heart shot of the infamous testicle kill shot x-ray is even funnier when it is a Zombie Nazi than a regular Nazi soldier. Despite the setting of WW2 and the weapons of the era being the default weapons you can select, this alternate version of reality allows them to be upgraded in particularly fantastic fashion with the upgrade kits you pick up along the way and using the workbenches in Safe Houses to take a moment to upgrade them to have more damage, larger magazines or to even add an element effect to one bullet in a fresh clip such as exploding rounds. Out in the mission and players will discover weapon mods in supply crates which despite having a limited use, can help handle groups of Zombies such as the electric mod which adds shock damage to your rounds. 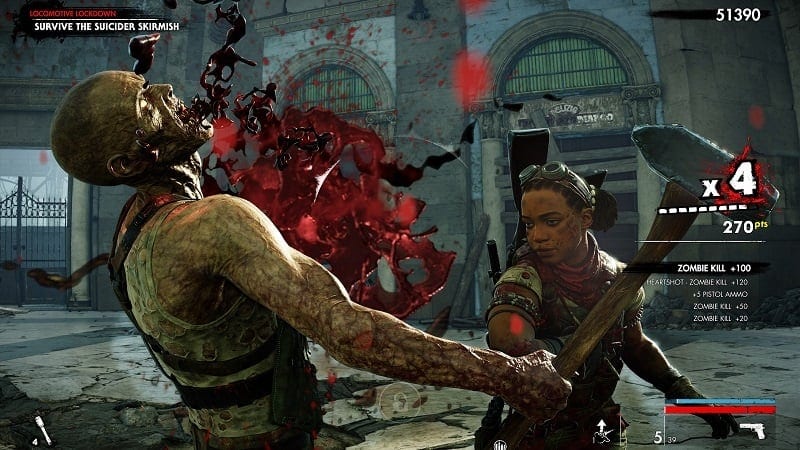 The magic of the action really comes from the bloodthirsty level of violence from fighting huge numbers of zombies, firing off your shotgun to take out an oncoming horde of Zombies is exhilarating then that moment when you have let the zombies get too close and you have to reload whilst avoiding them or worse yet, getting caught up in the action so much to fail to notice your ammo level and suddenly get the “no ammo” alert and quickly try to switch to another weapon. Thankfully, this is a world where ammo is readily available either in the ammo resupply crates that are strategically placed just before or after a big fight area as well as the undead dropping ammo when they are destroyed, some have to be stomped on in order to release what they are carrying so try to picture the classic image of people squashing grapes with their feet in order to make wine just with more blood and guts from the stomping of zombie corpses.

The action can get really frantic as well especially if the mission has objectives such as repairing and firing up generators to provide electrical power and having to hold your ground to protect the generator until complete. Zombie types range from the default standard fallen Nazi Soldier to suicide vest Zombies to types that can spit toxic acid at you. Now if you thought that was bad enough you will also begin to encounter far more deadly ones such as the flame thrower and mini-gun tank class zombies who are formidable indeed. The game ramps up the challenge the further through the campaign you progress and I do advise, because it will happen, if you do fall to just keep an eye on the game over screen as your corpse joins the Zombie horde, which if you are playing in co-op will give your teammates the cheeky opportunity of killing your new Zombie self for a cheeky achievement/trophy.

The story campaign is great entertainment and even more so if played with friends in the online co-op which also has matchmaking for those who just want to jump in with random folk online. There is a reward for exploring every inch of the area the missions are set in with collectables lying around which will unlock new things to use such as cosmetics like clothing. Each mission has a score target as well which will also unlock new items as you level your character up, as you do more slots will open up for upgrades and character perks in so doing giving the campaign a nice replay factor as you continue you increase your character level to become even more of a threat to the recently saved from being dead masses. 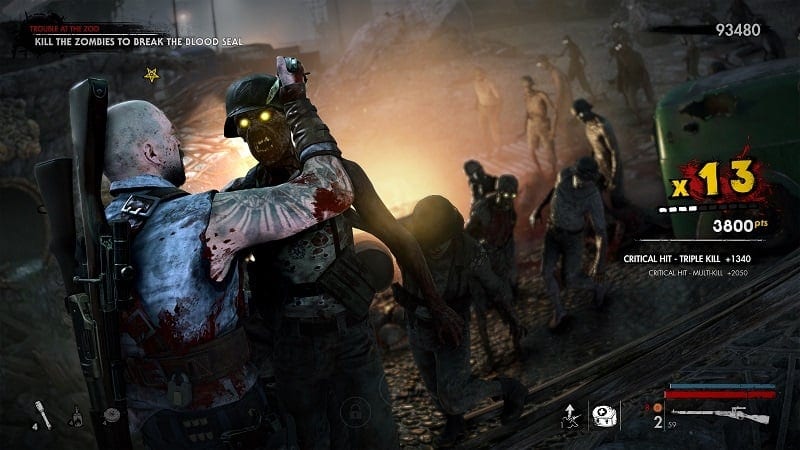 The Horde mode is exactly what you expect it to be as you team up with friends to take on waves of the reactivated dead folks but the brilliance comes from the gameplay which just makes all the blood splattering violence come to life even more as you fight wave after wave of the “refusing to stay dead” dead folk slowly targeting you in large numbers. The gunplay has been so refined for this instalment that everything just feels super polished, making those right in the thick of it moments and times when fallen teammates need saving very memorable. Everything just works as you would expect and hope it would and the result is an incredibly rich and fun shooter that offers something to series veterans as it does for newcomers like me.

Going into Zombie Army 4: Dead War having not played the series before; I was unsure what to expect. To say that I was more than pleasantly surprised by it would be an understatement. As a solo experience no campaign mission was dull and when joined by friends it just enriched the experience even more. The horde mode does exactly what it says on the tin and offers a tremendous experience for a solid team of friends to take on all the waves. Visually this game runs and looks amazing on the Xbox One X and the gory mess you can leave the Nazi Zombies in never fails to get stale and the sound of the gunplay is visceral and gratifying.

If you are a fan of the series you will be pleased to see all the refinements that have been introduced for this instalment whilst those new to the series will hit the ground running. It might be a tried and tested genre of games but Zombie Army 4: Dead War manages to keep things both satisfying and fresh to make this a must play title for 2020.

Sean McCarthy
Freelance writer but also a Gamer, Gooner, Jedi, Whovian, Spartan, Son of Batman, Assassin and Legend. Can be found playing on PS4 and Xbox One Twitter @CockneyCharmer
Previous articleDoctor Who Series 12 – Episode 7 ‘Can you Hear Me’ Teaser Trailer
Next articleAPEX Legends Season 4 has Launched!

Back in September 2019, the LEGO Group launched its first-ever mixed reality range called LEGO Hidden Side, here is our review of the new Jack's Beach Buggy set that just launched.
Read more