From the moment this game was first announced at E3 2019 it immediately grabbed my attention. I love space faring video games, especially those that allow me to be the hero saving the universe or just to explore strange new worlds in games like No Man’s Sky and Astroneer. But Journey to the Savage Planet managed to do something very different with that genre of gaming, and it does so in a funny and brilliant way that feels fresh making it a cracking way to kick off the new gaming year.

We all know the standard space exploration game is often to go searching for new worlds and alien life just for the sake of exploration and the betterment of Mankind, taking the role of a hero and best example of humanity sent to the stars by benevolent organisations whose only goal is discovery and enhancing the human spirit. Sounds all rather NASA and Star Trek doesn’t it, but this is where Typhoon Studios with 505 Games has managed to do something rather splendid and refreshing with this gaming trope because instead of the cookie cut space hero to star in their game, in Journey to the Savage Planet, you are more of a hapless standard person just trying to make some money by working for the 4th best Space Exploration company there is in Kindred Aerospace.

The strength of this game really does come in the form of flipping the conventional space exploration game tropes 180 degrees and makes it something far more realistic, that of just being someone sent on a job because they have debts to pay and the mission was sold as a get rich quick by just going to a new planet and having a bit of a walk about scanning stuff. But the moment you land, well crash land on the unexplored world known as AR-Y26, you get the sense that this is not the simple job you were promised. Your ship is a mess, a video message from Martin Tweed, CEO of Kindred Aerospace, automatically plays to celebrate your *smooth landing* reminding you of all the opportunities to go out and make discoveries that will make Kindred Aerospace a whole bunch of money as motivation for you the player and that oh by the way….you used up all your fuel reaching AR-Y26 and that if you want to get home, you better find some fuel! 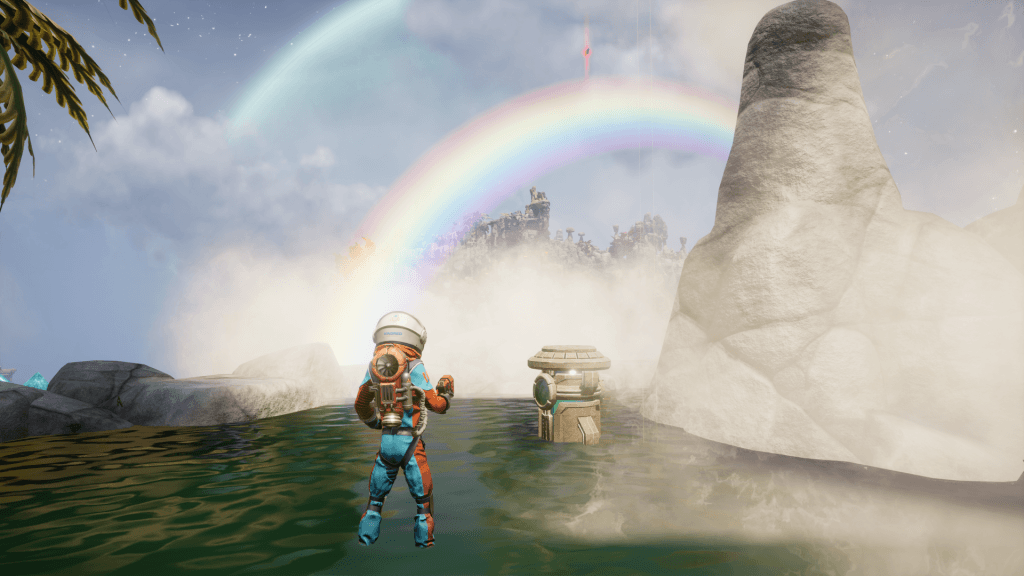 From that very moment and I am talking literally the first ten mins of the game, you just know this is going to be a very different kind of game. I love that Kindred Aerospace is the 4th best, meaning that you literally land with no way of getting home because the company saved money by not making it a round trip for you, probably due to the realistic expectation that you, as with hundreds of other employees blasted off into space, would not make it back at all. Not only that but you have been given no equipment other than your suit, a 3D printer and some cartographer bots along with the ship’s AI EKO for company. This means you have two main objectives really, do the job you have been sent on in order to make the money you want and need and also, find the fuel so you can actually get home again.

Visually this game has a vibrant art style with a planet made up of different environments to explore and traverse witch constant reasons to fire up the Photo Mode to both take screenshots and to just take in the sights of the world around you and it pushes the player to constant go exploring, looking in every corner and every platform to see what else the area you are in has to offer you. I love how the aesthetics constantly remind you of just how wondrous this new planet is but also just how 4th rate Kindred Aerospace really is. Returning to your ship or habitat after some exploring will often have a new video message from Martin Tweed or a TV advert for a Kindred product with a full on 80s cheesy presentation which is just funny and brilliant. I do not want to spoil what the ads are for but believe me when I say that the developer team had great fun in making these in game videos.

The humour continues in the wildlife you encounter in the world as well, often drawn for comedic value such as the puffer birds that are everywhere you go, just beachball size creatures with beaks that are harmless enough unless you do something to annoy them which is going to happen because the gameplay encourages you to pretty much, go give them a smack. Unlike other games of this nature, you are actively motivated to interact with the wildlife on this planet and not in an altogether friendly manner. All wildlife is made up of the very resources you are going to need to not only build the equipment you are lacking at the very start but also for the many upgrades you will require as you progress through the main missions. What probably makes it worse is the fact there is real satisfaction via the animation and sound of toe punting a puffer bird off into the distance, and as mean as that sounds, I challenge you not to do it a few times and giggle out loud. 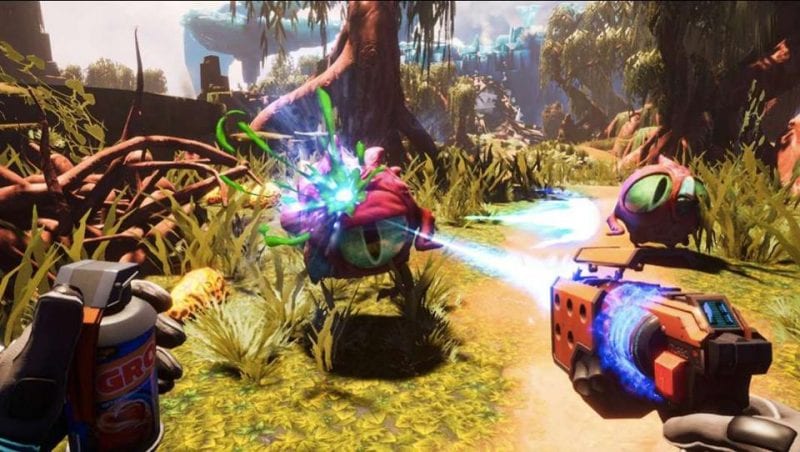 In terms of things to do, this game will throw a massive number of objectives to complete, some are necessary to complete the main story whilst some are side objectives for the area in which you are in. As a solo experience there is always something for you to do including extra tasks which are completely optional such as the science experiments Kindred Aerospace ask you to do such a scanning objects to catalogue them or taking samples from various forms of wildlife. Completing Science experiments will unlock more items in the 3D Printer such as upgrades to your jump pack and number of items you can carry. The gameplay really does cater for those who are the completionist nature and want to do everything they can in the game by finding every collectable and unlocking everything as well as catering for those who might just be happy to play through the story missions and be done. I really appreciated how the humour of the game constantly tries to motivate you into doing all you can as EKO constantly tells you of the bonus you could get by achieving everything you can do before even thinking about heading home once you have found enough fuel to do that of course.

The main missions involve the discovery of ancient ruins which Kindred Aerospace had previously no knowledge about so you are instructed to go investigate them leading to the discovery of a planetary teleport network which you can rather handily use as a fast travel system to nip about the different areas in the game. Most of the gameplay revolves around going to a new area and learning that you need a specific new bit of equipment in order to continue forward which leads the player to having to go find a certain alloy or element in order to build that bit of kit. Once you have the kit you will then be able to explore previous areas further as even the very early areas will have sections blocked by equipment needs. However, this never feels like a chore to do even in the later sections of the story as it always enables you to do more of the fun things in the game such as puzzle solving and exploring. What surprised me the most is just how chilled this game is to play, it really is just relaxing to be in the world just running around either looking for collectables such as the lovely orange gloop orbs that if eaten will enhance your health and stamina levels to alien tablets with strange broadcasts that EKO can translate for you.

How you decide to tackle the game is completely up to you as you can leave the planet as soon as you have found enough fuel to launch, even if you have not completed the main mission or side objectives, which of course will determine how happy with your performance Kindred Aerospace will be. This game can be played fully solo but you can also bring a friend along for some co-op shenanigans which can also be hugely fun which is really what Journey to the Savage Planet is about, having fun be it playing with a friend to the humour of the game or just exploring the world and investigating its secrets. There is a lot in this game that fills the ten hours that my full run in the game took and that still left a lot of space for completing all the science experiments and finding all the collectables outside completing all the main story and side missions before launching to return home. 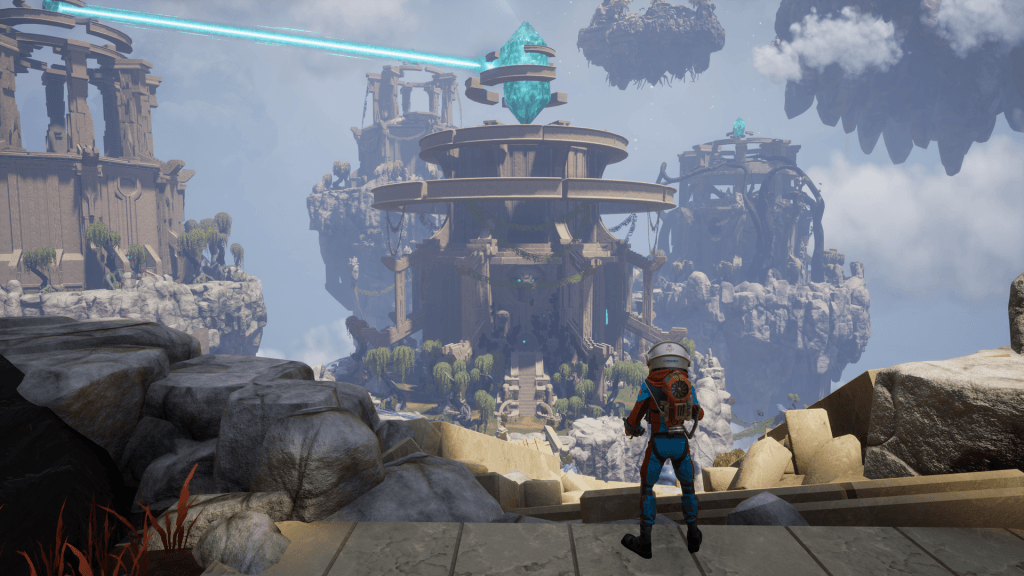 Journey to the Savage Planet was a cracking way to kick off 2020, and for the asking price of just £24.99, it certainly will not break the bank so soon after Christmas and the new year. I smiled throughout my first run with the game and immediately fired it up again to attempt a full 100% playthrough. You can really feel the attention to detail that was put into this first title from Typhoon Studios from the writing of the story to the comedy moments and all the way down to the names of the Achievements.

I honestly cannot remember the last time I had a full bug free experience with a game that left me just wanting to start it all over again but this time I will be sharing the experience with a friend to double the fun….and the chaos!

I admit that I am very late to the party with the Xbox Elite Series 2 controller but I have kept an...
Read more

Welcome to Elk is not the game I expected it to be. Of all the titles I have reviewed this year, this...

After being gifted MARVEL’s Avengers on my Birthday I have to admit I was both excited and rather cautious about getting my...

For the last year or so I have been mainly using wireless gaming headsets or my console gaming, finding the lack of...

The original CRYSIS title is infamous in gaming, the PC game that required an above elite level PC at the time to...

t's so rare to see a game that truly feels like it's attempting to do something unique these days. The cost of developing a...

Watch “It Came From the Rage” Trailer for The Medium!

Bloober Team, the masters of terror behind...
Read more
Gaming

I admit that I am very late...
Read more