We are already on Episode 4 of Series 12 and to say that the hope that the opening two part story ‘Spyfall’ had given me was almost completely squashed by last week’s Episode 3 ‘Orphan 55’ is an understatement to say the least. It had everything that I disliked about Series 11 and left myself and many other Doctor Who fans left cringing at what was presented as the follow up to Spyfall. Much like the formula of Series 11, to follow up the sci-fi episodes of Orphan 55 we have another historical real setting back on earth as The Doctor and Team TARDIS are investigating who or what is sabotaging Nikola Tesla’s generator plant at Niagara Falls.

The story opens with Nikola Tesla giving a presentation at Niagra Falls, showcasing his newest invention and design of a “wireless electrical network” for the world before the request of $50,000 investment turns the crowd hostile. We are presented with the notion that Tesla is not someone who is respected or believed that his ‘fantasy’ ideas could actually work. Whilst investigating his machinery following the discovery of a dead workman by electrocution, Tesla discovers parts from the machinery have been removed, before noises force Tesla to go investigate where he discovers a mysterious floating glowing orb which comes to his open hand. He and his assistant then hide as a noise makes them jump only for The Doctor to burst through a door as they are all shot at by lasers.

Quite the opening to the story which I have to admit, I am starting to be a bit of a fan of allowing the story to not begin with The Doctor and Team TARDIS doing something completely random such as Graham putting together a “coupon cube” that can teleport them into the story, and yes it has become very noticeable that teleporting is now the standard travel method of aliens and Team TARDIS as this episode took 35 minutes to introduce our favourite and iconic big blue box but instead features multiple people getting or being teleported about the place when a scene change needed to happen. It might just a personal pet peeve of mine but we are four episodes in and the TARDIS is barely being used to actually travel in, compared to any other previous Doctor and it is starting to annoy me quite a bit. 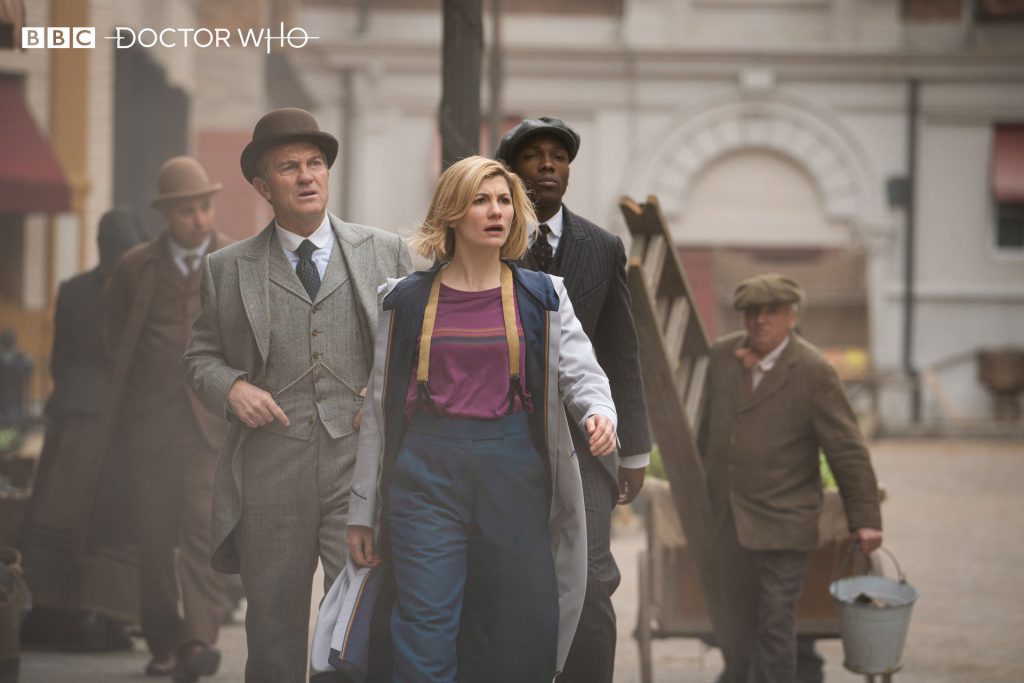 With the story back in a real historical setting of New York in 1903, a huge element of the story were the characters of Nikola Tesla  and Thomas Edison, historical rivalry which has featured in TV and films before. What makes it stand out even more is the deliberate attempt to make sure that Nikola Tesla is portrayed as the hero and true visionary of his time against the selfish, egotistical and money focused Edison, a former scientist turned unethical businessman. Despite The Doctor having an excitable reaction when she discovers who Tesla is before calling him a “liar”, the story flows by constantly showing Tesla to be a genius who only wanted to make the world a better place and a man whose ideas can be seen today including wireless technology for the internet and our devices with bluetooth.

When it comes to Thomas Edison however, the only thing the episode failed to do was to have him twisting an evil moustache. He was shown to be xenophobic to anything and anyone who was not American often aimed at Tesla who was a Croatian that emigrated to the US and to Graham, telling him that Britain was not known for being brilliant at business. He is shown to be a scientist who now only focuses on acquiring any patents and ideas that he can turn into something he can sell. Now looking up either historical figure results in a mixed bag of the type of men they actually were, but this was very much the writer giving the audience a very clear cut version of both men. Thankfully the excellent casting of Goran Visnjic as Tesla, Robert Glenister as Thomas Edison really made the characters work, even weaving in some possible signs of redemption in Edison towards the end, and they both had a very fun reaction to being inside the TARDIS for the first time. 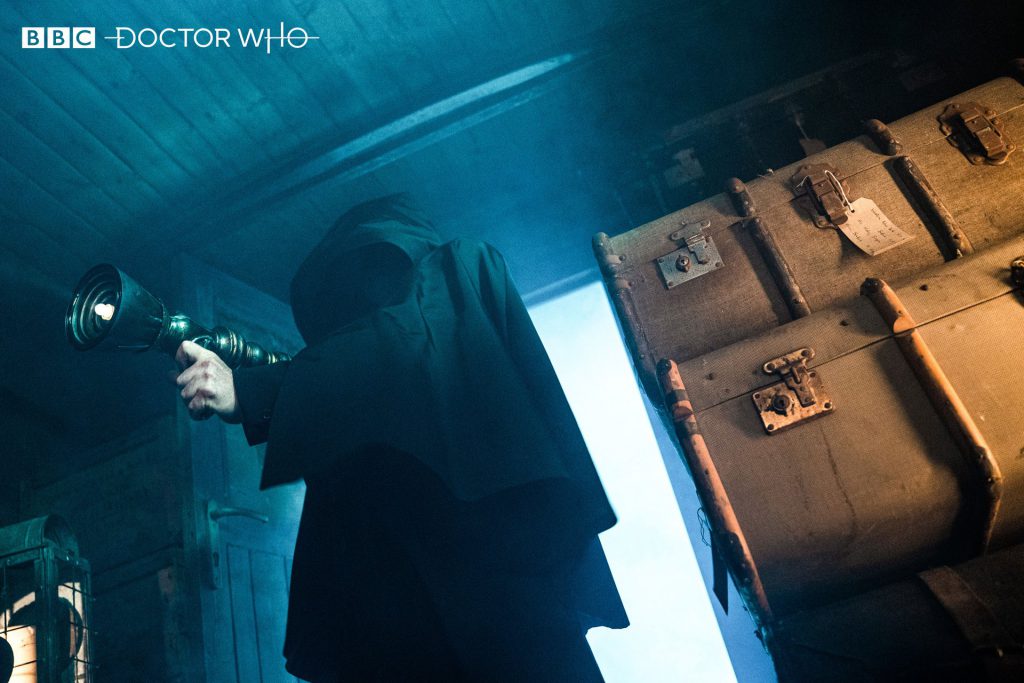 There was a surprise in the alien threat that came with this story, as we see that Tesla discovers a strange floating orb in his Niagra Falls plant at the start of the story which sees a mysterious presence drawn to him, including The Doctor who discovered a strange signal which brings her and Team TARDIS to investigate it, resulting in the Doctor and Team TARDIS along with Tesla and his assistant trying to escape via the Orient Express. Now so far the action chase scene appears to be the 13th Doctor’s party trick be in a car and motorbike chase in Spyfall to now running through the Orient Express. The stranger follows Tesla around with the ability to shoot red electricity from his hands which for the wardrobe and effects team, ended up looking rather sad in quality and no better than a student made fan film version of a Sith Lord from Star Wars.

It all leads to the reveal of the big bad of the story and I have to be honest, this completely threw me at first because the performance instantly reminded me of Sarah Paris as the Racnoss Queen from the 10th Doctor special ‘The Runaway Bride’ and for around ten minutes, I actually believed that this species had returned but it was then revealed that it was actually the Skithra, who look like the Racnoss but are more scorpion than spider so time will tell if it is revealed whether or not they are a splinter group from the planet or just a copy and paste of the Racnoss queen. The saving grace however was finding out that the Skithra Queen was actually played by Doctor Who fan favourite Anjli Mohindra from The Sarah Jane Adventures who was fantastic in the role, though it was almost a verbatim copied performance style as Sarah Parish’s performance, she did such a great job in the exchanges with the Doctor that she made the Skithra Queen a credible threat. 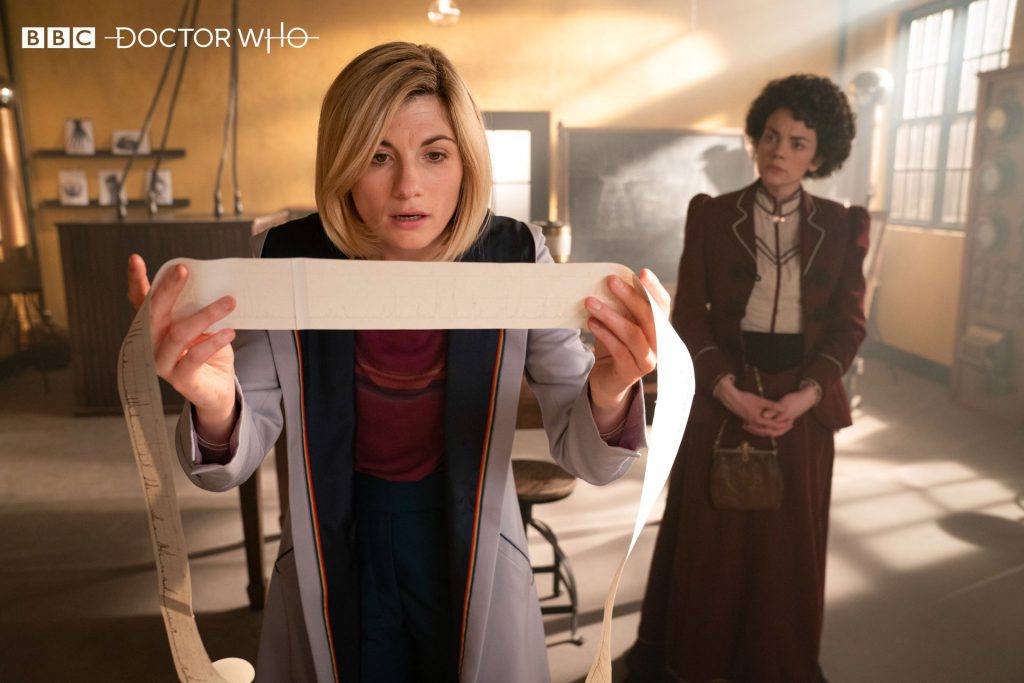 One of the big issues I had with this new look Doctor who which plagued my viewing in series 12 and is still a huge problem I am finding with Series 12, is that Team TARDIS is just more redundant than ever simply because there are too many characters for the story to focus on. I keep saying this but this episode is perhaps the biggest example of this problem. Ryan and Graham are no better than background extra’s in the show with only Yaz having any real screen time as she is able to have quiet moments with Tesla,  as she enquires why his laboratory does not have machines, notes and diagrams to show what he is working on which in reply Tesla says they are all in his head. Yaz asks him to explain his “wireless electricity” idea to which he goes on to basically describe what we now take for granted being wireless internet. Once again it is Yaz that comes across as the strongest candidate to be the Doctor only useful companion whilst Ryan and Graham have very few dialogue exchanges, they have less dialogue than Tesla’s assistant.

I did enjoy this episode far more than I did Orphan 55, but there are continuity problems with how the Doctor handles interactions with historical figures. In Spyfall both Ada Lovelace and Noor Inayat Khan had to have their memories wiped by The Doctor so their timelines could progress as they did before they encountered her, but here both Edison and Tesla are just left to carry on with their lives, left with everything they have seen of the Skithra and their ship, the Silurian weapon they saw and the insides of the TARDIS itself.

The Doctor does not seem to be following her own rules and it is clumsy, but to then to leave them with their memories and to have the Doctor then explain to Yaz who naturally asks if their futures were changed by the events of the story to just have the Doctor say that it did not and that Tesla went on to have an unsuccessful life but his ideas would change the world in an attempt to end the story on a happy note. 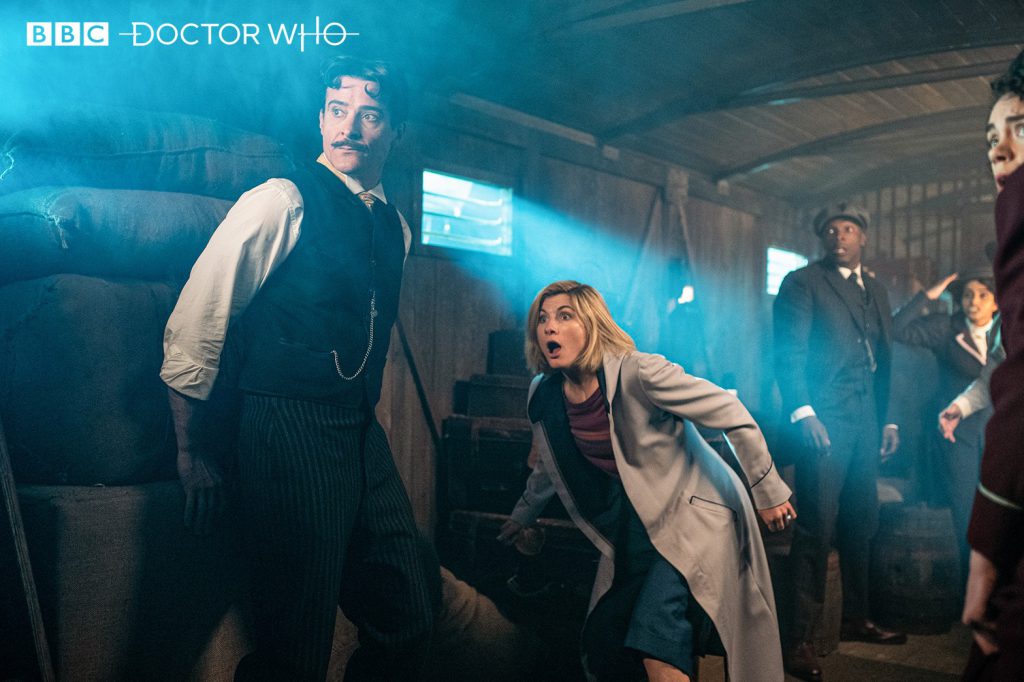 Far more enjoyable than the mess that was Orphan 55 last week and a clever use of real historical figures but the same issues remain with too many members of Team TARDIS having nothing to do all episode long and is an ongoing issue for Chibnall and his Doctor Who era, I really hope that Series 12 finds a way to reduce the people on the TARDIS so that it no longer shows up as a weakness in every story.

This again felt like a Series 11 episode, and I wanted to see more of the refreshing changes made in Spyfall actually filter into the rest of the series episodes but now two down after Spyfall, and I am still waiting to see it.

Front Mission was a series that was pretty popular in Japan and did ok in other territories. Left Alive is a third person spin off from the Front Mission series, it's not a series I'm particularly familiar with so I'm hoping Left Alive will give me the encouragement to try it out.
Read more