It’s odd to not see a lot more games like LittleBigPlanet being released, given the popularity of the franchise. Fortunately the developers of Woven must have noticed this when they decided to not only make use of its unique visual style, but also some of the ideas that made LittleBigPlanet so fun to play.

The world of Woven, like the one in games such as LittleBigPlanet and even Yoshi’s Woolly World, is made up of fabric held together by stitches. Although it’s not quite as charming as the two titles mentioned in the previous sentence, it’s still a delight to initially step into this world and see how it works.

The idea here is that players control a creature called Stuffy who find itself longing for the excitement that comes from exploring the world. Fortunately, this wish is soon fulfilled once it comes across a firefly like creature called Glitch that has the unique power of changing creatures, such as Stuffy, by making use of a knitting machine of sorts. It’s a clever idea to continue to make such good use of its theme to present players with various fabric based tools. 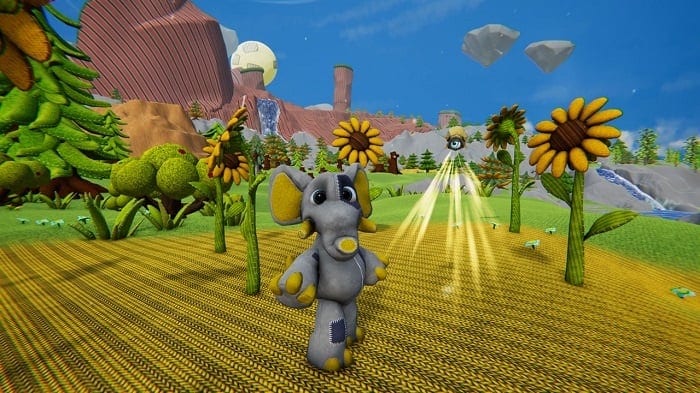 The use of the machine to change Stuffy’s physical appearance means that it may start off as an Elephant, but pretty soon it can turn into other animals. This is done by finding blueprints scattered all over each of the areas that the duo travel through to their final destination. What makes this feature more unique is the fact that each blueprint comes with different abilities. Each ability will come in handy at different points to overcome obstacles in the way. Not only that, but players can turn poor Stuffy into some kind of woolly Frankenstein by combining parts from different blueprints to make it possible to use different abilities.

It’s a fascinating idea that doesn’t necessarily always get used as intended. The root of this particular issue lies in the vagueness of most of the objectives. It’s not always clear what needs to be done and it can result in some unnecessary backtracking due to not knowing what abilities are required in advance to progress further.

Having to spend so much time going back and forth might not have been so bad if Woven didn’t feel the need to make Stuffy such a slow walker. At first this seems like a side effect of Stuffy’s rather wonky elephant like form. However, this still happens with other forms and only a couple of hours in do players gain access to a flying ability that makes our woolly friend a bit faster.

It’s not only Stuffy’s appearance that players can change with the press of a button. There are patterns that Glitch can scan and then apply to Stuffy. This creates some interesting opportunities for Stuffy to make itself even more useful. For example, at some points these patterns are used to blend in with the environment, in order for Stuffy to avoid being attacked by one of the bosses. Another puzzle sees Fluffy dressing up as a fake Burberry chav in order to convince a snake to let it through.

Woven can certainly be vindictive when it wants as well. Whenever caught by bosses, the duo are sent to the slammer and players are forced to then escape by solving the same simple puzzles over and over again. It almost feels like it’s taking pleasure in punishing players. 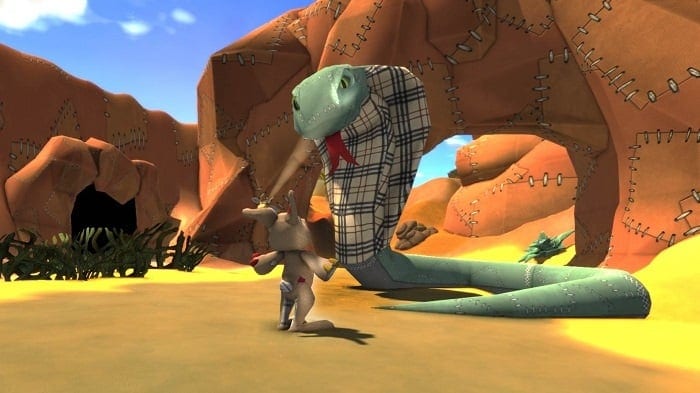 Funnily enough, Woven starts becoming more like the game that it could have been towards the end. There are truly engaging puzzles that make better use of the environment to provide players with better ways to use abilities in a clearer manner. Even if the game software itself didn’t seem as stable by this point as it crashed and went back to the Nintendo Switch’s home screen twice.

Not that it isn’t fun to explore each of the areas, but it could have benefited from not spending so long in the early areas. A concept similar to that used in similar 3D adventure games such as Yooka-Layle and Banjo-Kazooie where players returned to previous areas to explore more sections with new abilities might have made it more engaging. The lack of more creative tasks/quests as found in the games mentioned in the previous sentence would have also helped to break from the occasional monotony of doing very similar tasks.

Although the visuals are pleasant enough, there’s also a certain roughness round the edges. In fact, some of the areas look a bit dated and reminiscent of Nintendo 64/Sega Saturn era visuals. At least the storyteller is a delight to listen to with his ceaseless optimism.

There’s no denying that Woven certainly has some untapped potential. It’s just a shame that it doesn’t make better use of its wonderful features to turn itself into a game that could have been as engaging as the likes of LittleBigPlanet and Banjo-Kazooie.

Diogo Miguel
Previous articleBlair Witch Out Now for PS4
Next articleDestiny: Season of the Dawn Announced with new Trailer