I should start off by what you actually get in the box itself, so unsurprisingly you will find the Level 50 Wireless Headset itself, the USB Wireless Dongle and a rather generously long 12-meter USB cable for charging. The packaging itself certainly does the job as the box is branded to Xbox One traditional green. As with the PlayStation 4 LEVE 50 Wireless Headset, it would have been nice if the interior holder was painted in the same box colour instead of the generic brown cardboard but that is just a personal niggle with the presentation as it would have popped a lot more when opening the box to have something that grabs your attention rather than a very bland and cheap looking internal packaging but with that in mind, let us take a look at the specs of the Level 50 Wireless headset. 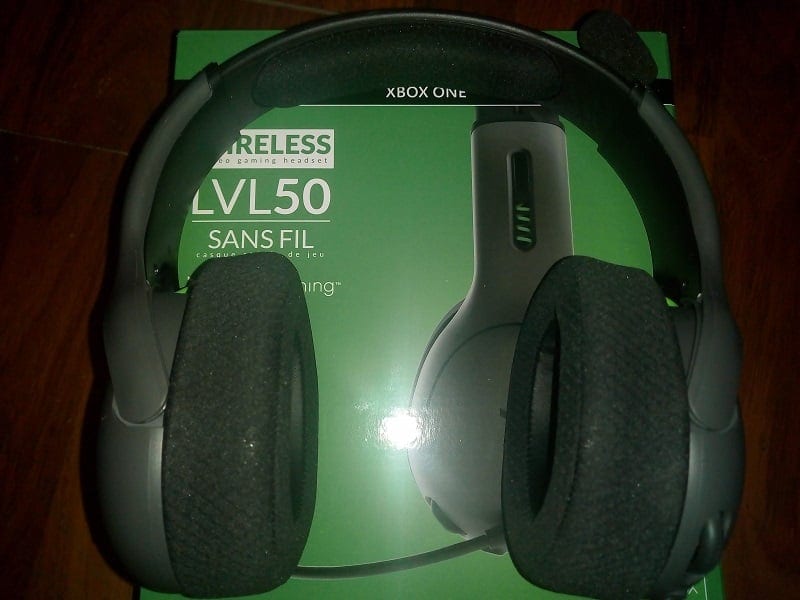 Being almost identical to the PS4 version, I am still hugely impressed by the build quality for this mid-tier gaming headset. The big focus on simplicity is still the best way to describe this headset and it begins with the full-on plastic feel to the headset. It does feel especially ‘plasticky’ as well to the touch but what I also was surprised about was just how light this headset really is which I find to be incredible in a wireless headset. The inner ear cups are coloured in branded Xbox green and as with the PS4 version, am still a little disappointed that there is no Xbox brand logo or imagery on the actual headset or inner ear cushions, again not a big deal and is still just my pickiness for presentation being a little triggered. The surprise aspect to the build of this headset that I really like is the headband bar between the ear cups is designed to be bendy, making it very hard to snap this headset, something other headsets that are simple pieces clipped together can do. Showcasing this during a live stream to viewers in chat and the reaction to me bending the headband surprised a good number of them. The extreme durability of the Level 50 because of this unique feature is a great example of the common sense design over adding flashy aesthetics.

The theme of common sense continues into the features of this headset as well. Normally on a wireless headset, a lot of the basics such as volume control and mic mute button, are tiny buttons located on one of the ear cups making it quite often a fiddly and cumbersome process to do simple basic things like volume. The Level 50 for Xbox One does three very simple common-sense things as a headset which I feel does make it stand out even more. First the mic itself has a long  boom arm attached to the left ear cup and while at first it does look a little too long, the arm allows you to position the mic exactly where you want it to be and never once feeling like you are over doing it or that the mic arm could break.

The mic itself is great quality, both streaming and in gaming party chat, my viewers and teammates could hear me clearly during chaotic games like Borderlands 3, CoD Modern Warfare. Muting the mic is also another great common-sense design feature with the simplicity of simply raising the mic arm fully until you can hear an audio cue but can only feel it click into an upright position to know it is locked and muted meaning no more looking for that red light that normally shows that the mic is actually muted and no tiny button to try and quickly locate to activate it. I simply love this aspect to the Level 50 and no longer would suffer the missed button or “forgot to mute the mic” moments either on stream or during MP sessions with friends. The headset power button is situation behind the mic arm on the left ear cup with the EQ Mode button next to it which can switch from a more balanced audio level to a more bass focused level, the sound did sound great with either mode but I found using the more bass focused mode serving better with the bombastic games I tested the Level 50 with.

Volume control is another example of the common sense approach to the Level 50 with a volume dial placed on the right ear cup which uses the old school style of a “dial knob” instead of a button system. I have always found managing volume on a wireless headset to be pretty annoying when having to find the volume control buttons. Instead, this dial brilliantly does exactly what you need it to do and its basic granted but, sometimes if basic gets the job done, basic will do. Unlike the PS4 version, this Xbox headset has an additional Game to Party mixer dial on the left ear cup which works incredibly well and is a really great extra features as usually you would have to go into the Xbox audio settings to make adjustments which is  time consuming especially when in a frantic MP game. All these features scream simplicity at me which is exactly how I feel about this headset for both the PS4 and Xbox One consoles, it gets the job done at a level that is huge value for the price tag without forking out more just for bells and whistles.

This brings me nicely to the main feature of this headset, the Wireless connection. Like the Level 50 for PS4, this Xbox headset uses a USB dongle to serve as the wireless transmitter for the console, it Is quite a large dongle which will be very visible on the console itself particularly if you use the front USB port on the Xbox One X. But the beauty of this method is that plugging in the dongle to the console makes it detect the headset wirelessly once turned on. The plug and play aspect to this headset is really impressive and just so efficient, removing the need to faff about syncing the headset to the console, each time I used it, it simply connected first time every time. I was again really impressed with the headset charging wise, the 12m USB cable that comes with the headset is brilliant for just connecting and putting away the headset to the console or any available USB port on a device on standby. It took only a few hours to fully charge the headset out the box, and just as I tested the PS4 version,  I left the headset on and idle for a full day and it still had a good charge for a 3 hour COD MW session the next day. The range of the wireless signal is also very good, I live in a flat and from my gaming room I was able to go to my kitchen and bedroom on opposite sides of my gaming room and did not lose signal which is impressive because I can lose Bluetooth connection just going into my kitchen.

The Level 50 Wireless Headset is a brilliant bit of kit for those looking for the benefits of a wireless gaming headset on a sensible budget for users of both PS4 and Xbox One consoles. There is a wired version that has the same features other than being wireless for a cheaper price but I was really impressed with the wireless model. Sound is great and it does exactly what you need it to do with simplicity at its foundation and an excellent battery and charge life to ensure this headset is good to go whenever you need it. The LEVEL 50 Wireless Headset is a superb example of PDP Gaming making a large enough statement to stand in the middle of a crowded gaming headset market with a headset that punches above its weight and is definitely worthy of being checked out for its reliability and common-sense features.

As we approach the holiday season, the LEVEL 50 Headset for both Xbox One and PS4 is something any console gamer would appreciate and though visually it might not grab your attention right away, the quality in the performance will make a statement right away.

I admit that I am very late to the party with the Xbox Elite Series 2 controller but I have kept an...
Read more

Welcome to Elk is not the game I expected it to be. Of all the titles I have reviewed this year, this...

After being gifted MARVEL’s Avengers on my Birthday I have to admit I was both excited and rather cautious about getting my...

For the last year or so I have been mainly using wireless gaming headsets or my console gaming, finding the lack of...

The original CRYSIS title is infamous in gaming, the PC game that required an above elite level PC at the time to...

t's so rare to see a game that truly feels like it's attempting to do something unique these days. The cost of developing a...

Watch “It Came From the Rage” Trailer for The Medium!

Bloober Team, the masters of terror behind...
Read more
Gaming

I admit that I am very late...
Read more