Remedy has always been a game studio I have kept my eyes on from the amazing Alan Wake games to the very experimental but highly entertaining Quantum Break for Xbox One. When I learned that Remedy were working on a new title I wondered what lessons had been learned from Quantum Break, an Xbox exclusive that unique in that it was combining video games with actual television style full episode’s to further the narrative in between the story telling through the game itself which even had the full backing of a brand new Xbox Entertainment studio although it was closed pretty soon after Quantum Break actually launched. So, what could this new game deliver…. well it was time to find out if I could keep my ‘Control’.

Control is an absolutely fascinating video game in so many ways from the visuals and audio systems used to enhance the incredible level designs to the just bonkers story that feels as though it was inspired by every form of sci-fi show and film ever made. Right from the moment you press start and are transported into the game world, there is a deliberate intention to keep you as the player as confused as to what is happening as it is to the main hero in the game Jesse Faden, a young women who is making her way to the main head office of the Federal Bureau of Control (FCB) based in New York. All the player knows comes from a short bit of narration from Jesse herself as she explains she has been on a journey to investigate and find out why this organisation took her brother away seventeen years ago.

Which is about all you have going into the game from a story point of view, as I said there is a definite desire to keep the player in the dark as to what is happening right from the off and usually this style of story telling can prove to be frustrating but Control uses is rather intelligently in that instead of laying down loads of exposition, it simply introduces you to Jesse and explains why she has gone to the building and then lets the story be discovered rather than told. This works by using the many collectables Jesse can pick up from Company Documents with redacted information to media such as audio and video footage which gives more insight into what the Bureau of Control has been doing. 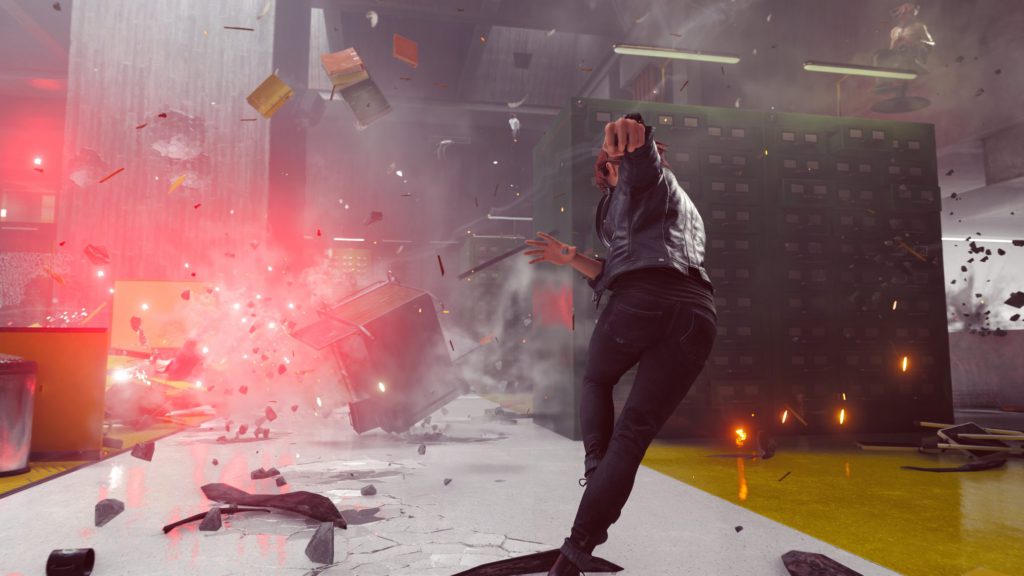 At first the lack of explanation can leave the player a little baffled especially as the first character you meet is rather mysterious janitor called Ahti who seems to think Jesse is there to apply for the job as his assistant. Right after this you go to the FCB Directors office only to discover the dead body of Zachariah Trench, the now former Director as well as a strange gun lying beside him. Jesse is compelled to pick up the gun, discovering that it is actually something quite extraordinary as weapons go but the strangest thing about it is how the wielder of the gun, known as the service Revolver, instantly becomes the new Director of the FBC meaning that all the actual staff of the FBC now respond to Jesse as the new Director. Jesse soon learns that the FBC has been investigating the paranormal connection of the real world to the astral plain and something has gone very wrong and is centred within the FBC main building, referred to by staff and paperwork as “The Old House”.

This means that Jesse really has two objectives at the start of Control, finding out what happened to her brother Dylan and now finding out what has happened in the FBC. Characters will ask Jesse to complete tasks as the Director, which the player will do because the hope is that by playing along, Jesse will be able to uncover the secrets of the FBC and find her brother. Gameplay comes in the form of the familiar third person action seen in Quantum Break with the Service Gun providing the weapon. But this is not the only attack option Jesse has as she also develops powers such as the very inspired by the Jedi, ‘Launch’ power which is pretty much telekinesis allowing Jesse to pick up objects and ‘launch’ them at enemies. Those enemies come in the form of The Hiss, beings from the astral plane who can take over the body of FBC staff and control them to fight you with conventional guns and grenades. As you progress through the story missions and explore further into the FBC building, Jesse can claim ‘control points’ by clearing the area of any Hiss Enemies and cleansing the point. These points can then serve as fast travel as many of the main missions and indeed the many side missions you can pick up, will require you to go back and forth from areas you have already visited.  The game also borrows the Metal Gear Solid system of having levels of clearance which Jesse will need to obtain the correct clearance card to access, most of which are obtained by progressing through the story. To say this game offers a lot for the player to do and it is worth seeking out and completing the side missions in order to obtain materials and experience points needed to upgrade your Service Revolver and abilities. 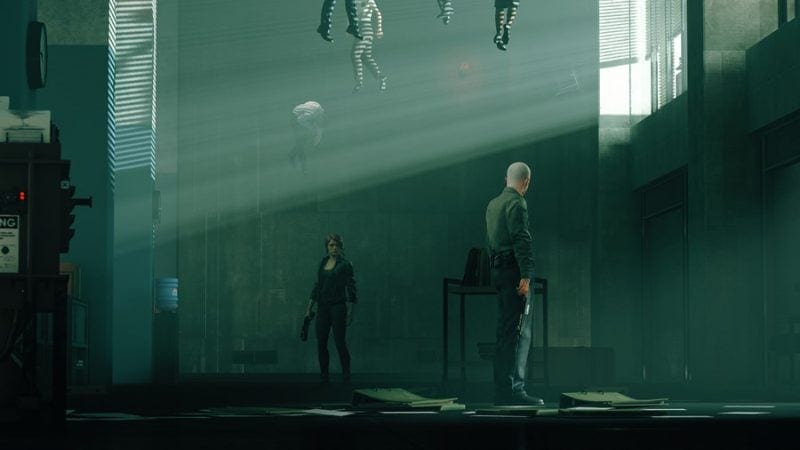 The Service Revolver has different modes, which essentially turn it into different forms of gun such as a machine pistol, a shot gun for example with two modes able to be carried and switched between on the fly during combat. They can then have mods added to increase their recharge rate or damage. The same applies to Jesse’s abilities and attributes as mods can be added to improve health recovery or energy spent using. There are different tiers of quality for these mods and boosts and they are easily obtained through natural play so there is always a chance to improve your load out because the battles you can find yourself in can range from being a doddle to being an absolute cheap nightmare.

The Hiss can also come in various types from your base standard type with guns to ones that can float, having shields and some that can even heal other Hiss. Then you have Boss type Hiss who can do a lot of damage with every hit which can catch you unaware until you can adapt your loadout to battle them. I did find this one of the most frustrating elements to control until my had enough modifiers to improve the Service Revolver modes and boosts to my abilities. Jesse using her powers felt very much like using Force abilities in The Force Unleashed and the physics in the game allow for some amazing uses of the powers with everything near enough capable of being turned into a weapon to use. A nice touch happens to be if you have thrown everything you can find with Launch, if you aim at the ground or a wall Jesse can rip off cement to hurl about instead.

The level design of each section of the FBC building is staggering really especially when you encounter areas where the astral plan and our reality have started to blend together. There are plenty of puzzles to find and solve as you try to navigate around the building which may depend on abilities you will not learn until further into the game. The best way to describe it would be to imagine what it would be like to have the building inside the TARDIS and discovering it changing around you. Visually the game is just stunning with so much attention to details that bring it more to life as you explore and find more and more secrets via the collectables. There is a downside however to all this if you are playing Control on anything but the Xbox One X. When playing on the X the visuals are sharp and fluid but moving down to the S or even the original Xbox One and performance issues can make Control quite annoying at times. Severe slow down can happen when exiting a menu screen which can take a few seconds to settle down and facial animations when in dialogue scene can come across as stone faced and emotionless. Future game updates have been promised to address these issues but it’s a shame that it can tarnish the experience from what is a real GOTY contender. 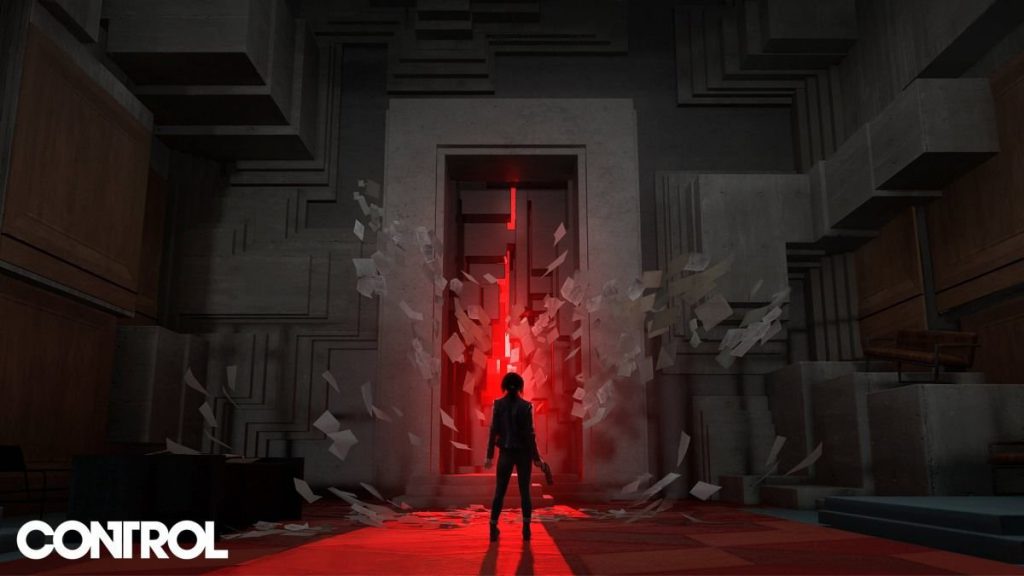 Control is a brilliant and mind-bending game to experience and you can see the lessons Remedy have learned from Quantum Break by now blending real film footage into the game engine to add that extra enhanced level of reality to the story telling. The combat is fun and you can feel Jesse becoming more powerful with every new ability she learns and the modifying system is pretty easy to use and navigate to boost those powers further. I loved how the story is left to be discovered and the reward for paying attention to the extra lore and information found in the collectables. Jesse is a fantastic lead character and getting to hear her inner monologue at crucial times is spell binding.

Performance issues aside and hopefully updates and patches will address them, Control is a step forward in how story telling in a sci-fi game can be and Remedy have really found their footing in using the paranormal and science to create worlds for players to be fully immersed in. Action packed and deliciously abstract, Control felt fresh in a gaming year brimming with heavy hitting titles already out and still to come.

Sean McCarthy
Freelance writer but also a Gamer, Gooner, Jedi, Whovian, Spartan, Son of Batman, Assassin and Legend. Can be found playing on PS4 and Xbox One Twitter @CockneyCharmer
Previous articleBlair Witch Out Now for Consoles and PC, Also Included in Xbox Game Pass!
Next articleAstroneer To Take Orbit on PS4 This November