Did you know that the first iteration of the Nintendo 3DS handheld was released over 8 years ago? It seems like Nintendo and developers of software for the Nintendo 3DS are finally putting it to rest. Persona Q2: New Cinema Labyrinth is most likely the last physical release for the handheld in the west.

Now Persona Q2: New Cinema Labyrinth is a bit different from the main titles in that it makes use of existing characters. In this case, it puts the spotlight on the cast of the popular Persona 5. It makes sense given how well received the characters were back when it was released and the title managed to bring attention of the franchise to a wider audience. Joker (or whatever the player calls the main character) and the gang are out exploring the Mementos palace reality when they are sucked into a whole new world. It turns out that they are inside a film (or movie for American readers) and soon enough find themselves stuck inside a cinema. The only way to get out is to obtain keys for the chains keeping them inside by changing the oppressive theme of each film.

Those that played other Persona games will no doubt be accustomed with the amount of text to read. At times it feels like an interactive novel and the cast loves to chat at every opportunity, but at least it’s an entertaining one. As the story progresses, characters from two other Persona games are also revealed to be stuck inside the cinema. Although it’s interesting to see these characters interact with each other and be amused by their various quirks and unique ways to use their powers, it can also be a nuisance in terms of character development.

With a cast this extensive, it makes it nearly impossible to make sure that characters are evenly matched in terms of levels and equipment. It would be difficult to make sure that each has the best equipment and more so when newly introduced characters are at usually higher levels. The issue is that if then making use of these new characters, it means not focusing on levelling up the current characters. It would have made sense for every character to at least gain experience after defeating enemies. 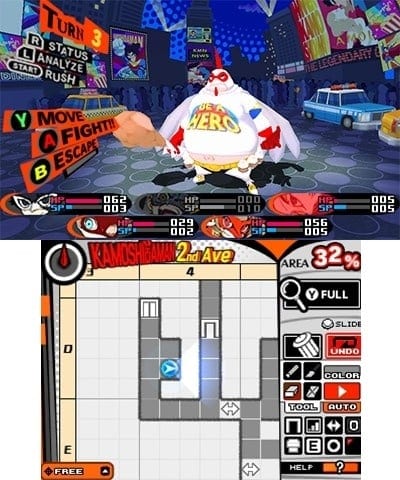 The fighting itself is turn based and comprises of five characters taking on one more more enemies. Albeit it might seem simple at first, there are many aspects of fighting to get to grips with and more elements are added with progression. For example, cunning players can take advantage of figuring out what attacks each monster type is weak to in order to gain a power boost in the next turn and spend no health or special points. Oddly enough there doesn’t seem to be any way to regain special points outside of going back to the cinema to replenish them.

The gradual manner that the game introduces new powers and other aspects of the fights definitely feels more balanced compared to the main games. Which makes it satisfying to learn about the ways to use these powers and persona characters that support main cast. Those not acquainted with Persona titles should not find it difficult to learn how Personas work as well due to the thoughtful manner that the game demonstrates how to use them in parts. Some ideas from Persona games make a welcome return too, such as ganging up on enemies when all of them are downed.

What remains more or less the same is the way that each film world is navigated. Although a grid system is used and characters move in a manner similar to old school games such as Doom, the idea of exploring is still the same as in main Persona games. Each film world dungeon consists of floors that the player slowly but surely explores in order to gain progress. Given the concept of a grid for each floor players are given the choice of adding details to the grid map. Those that struggle to remember the grid layouts can add symbols to mark shortcuts and any other significant landmarks. The idea is to continue exploring and knowing when to stop, in order to go back to the cinema and restock items and perhaps change the battle plan by picking other characters and such.

What stands out whilst exploring is the way that each film introduces a new concept to make it interesting to keep playing. By the time that the third becomes available, a labyrinth of doors that close and open as characters move makes for a compelling puzzle to crack. Each of the films also has powerful enemies dubbed FOEs that players should actively avoid. These opponents appear on the grid unlike regular enemies. What can be a nuisance is the way that FOEs can occasionally accidentally trap characters in a way that it becomes impossible to not have to use an item to go back to cinema or start of current dungeon floor. It means having to go through the same sections of the grid all over again. At least randomly generated fights with regular enemies are not a regular occurrence and there are items to help avoid them. 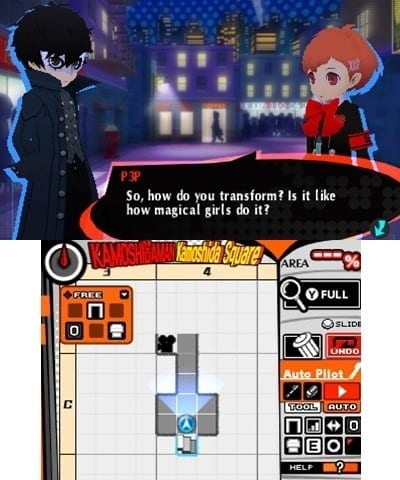 What becomes clear right at the end of the first film is the sudden difficulty spikes that this game suffers from. It is all seemingly going well until coming across the end boss. These difficulty spikes are challenging even when setting the battle difficulty to a lower setting. It’s clear that this game has a strict policy when it comes to giving players a break. It does get more challenging with each new film, but it does mean that players are given something to overcome.

The game also makes use of the films theme to add optional missions as extra scenes. It makes good use of each of the dungeons and they can be used as a way to level up without having to go trolling for experience in fights in the dungeon for a film. The locations are inspiring despite the fact that it can get tedious to spend so much time exploring each floor within a dungeon. It does feel like it could have benefited from giving players the choice to do a quick save, given the fact that game is on a handheld.

Now what is surprising is how Persona Q2: New Cinema Labyrinth makes use of so many of the Nintendo 3DS’s unique features. For example, coins earned by walking with the handheld on can be used to unlock treasure chests. As already mentioned details can be added to the grid map for each dungeon floor and this is done with the touch screen. Albeit the title skipped the use of 3D effects (sensible given the lack of this feature in the latest 3DS iterations) it is commendably to see what is probably the last proper game released on the system to make use of other unique Nintendo 3DS features.

Persona Q2: New Cinema Labyrinth is definitely one of the better ways to end the long reign of the Nintendo 3DS if its to be the last physical release. Even if it’s one with a steep learning curve and very challenging nature.

Diogo Miguel
Previous articlePES 2020 Demo to Release July 30th
Next articleWatch the Official Trailer for Jumanji: The Next Level