Ubisoft E3 2019 Showcase: All the News and Trailers

The Ubisoft E3 Showcase has been a highlight of the event for the last few years for me, not just because I am a huge fan of many of their franchises but also because the event is just sheer fun and joyful to watch. With Watchdogs 3 already confirmed thanks to it leaking early, it will be interesting to see what it is all about especially with its London setting and with Assassin’s Creed taking a break for 2019, will they announce more Expansion DLC for it. Oh so many questions and hopes tonight which Im praying will be answered….also, can we finally please get a Splinter Cell game Ubisoft?!?

Below you will find all the trailers and news from the event as it happens including my reaction to each trailer and new info with my final thoughts at the end:

Ubisoft is actually holding a 30 min pre-show ahead of showcase, pretty much talking about releases of the last year and how things are going including a look at the Assassin’s Creed Series. This is really just a short celebration about all things Ubisoft from the devs, to merchandise and the game. Very nice to see and you can really see the passion and dedication in everything the devs say. Big surprise is the launch today of Assassin’s Creed: Odyssey “Story Creator Mode” as well as announcing the ‘History Mode’ similar to AC Origins which is like a living history guided tour of all things ancient Greece coming to Odyssey.

The showcase opens with a live performance from the Assassin’s Creed Symphony, currently touring. The Assassin’s Creed series easily has one of the best soundtracks for a gaming series not to mention stand out individual game scores but Assassin’s Creed II really set the benchmark for everything that followed. This small performance shows off music from AC II, AC III, AC IV Black Flag and AC Origins and Odyssey, beautifully played live and makes me wish I could go to a full concert and just having the original game trailers playing behind them is just….wow a true celebration of Assassin’s Creed as a series.

No surprise as we open with Watchdogs 3: Legion, which is indeed set in London and we actually have some Alpha gameplay demo playing, this is very London but then every Ubisoft game has a Cockney or too in their games so they have had the practice. Gameplay has very familiar mechanics such as scanning and hacking people’s phones to learn their identity and secrets. Combat is very much improved it seems with various tech systems such as cloaking technology at work as well as some driving which looks as clumsy as previous games. What is interesting is that main hero controlled by the player…..dies and the action moves to another character in the resistance, in this case a rather lovely little old lady. This is very interesting as a concept for the game, and all these characters seem to be taking instructions from a possible AI….well, Watchdogs 3, you have my attention and I will see you March 6th 2020 when it releases on PS4, Xbox One, PC and Stadia! 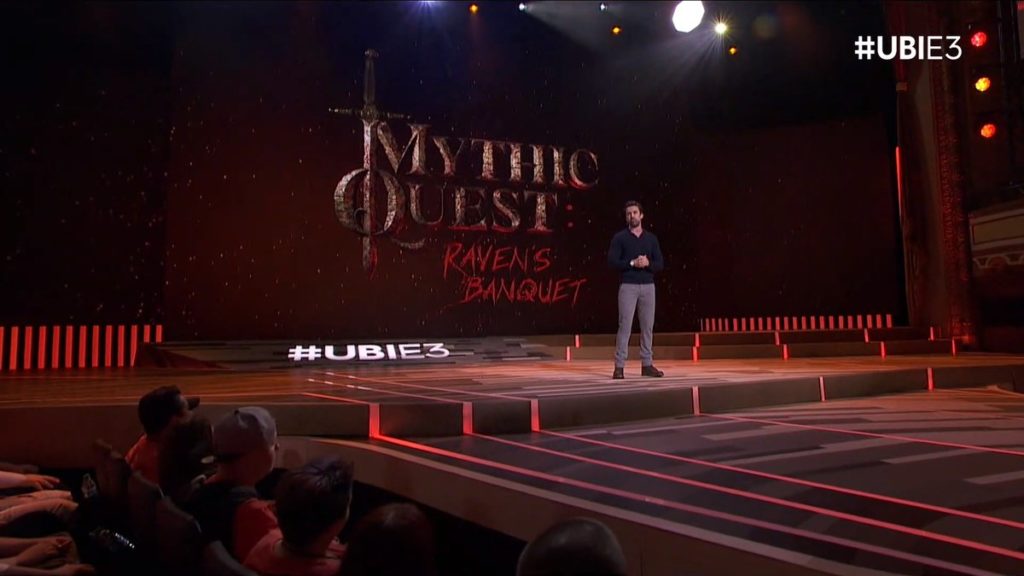 Next up we have the actor Rob McElhenney from Always Sunny in Philadelphia on stage to introduce a surprising new TV Show for Apply TV, Mythic Quest, set on a Video Game Developer team with a the most popular game in the world…and all the behind the scenes issues and problems that can create. Seems Ubisoft are branching into the Entertainment field, intriguing.

A quick look at the next season of Rainbow Six Siege next after a plug for the eSports celebrity challenge happening after the showcase ends.

Next the reveal trailer for Brawlhalla Adventure Time Crossover Event as friendship duo Finn and Jake are coming to Brawlhalla in this Epic Crossover event!

Ghost Recon Break Point is up next and ooh it is looking good with a manifesto trailer with no other than Jon Bernthal (Netflix Punisher) delivering a powerful speech before taking to the stage with his own dog who is so well behaved in front of this crowd and he seems genuinely excited to be a part of the game and on stage. A new gameplay trailer that just looks amazing, I was a huge fan of Ghost Recon Wildlands and this is looking darker, grittier with even more focus on squad gameplay. October 4th can’t get here fast enough! Thankfully the Beta will go live on September 5th, which you can register via the official Ghost Recon Website.

Just Dance 2020 up next with another fantastic intro into the show and live performance on stage with incredible dancers dressed up in full Just Dance Cosplay.

For Honor up next, a fighting game for me that was uniquely refreshing but sadly suffered terrible issues on console but Ubisoft have supported it and the community and now going into its third year,  we get a glimpse at a new expansion “Shadows of the Hitokiri’

Division 2 up next with a nice ‘Thank You’ to the community of players and streamers who continue to make it a success and a quick tease at the next content update for the game with Episode 3 coming in 2020 and it looks amazing, in fact all the content episodes look great. Next we comes the confirmation that Ubisoft will be partnering with Netflix to work on ‘The Division’ Movie.

Next comes the announcement for Uplay Plus, a PC based games subscription service as Ubisoft enters the game streaming service market. This makes sense as Uplay was their own PC game launcher, also not surprised it has not made it to console. $14.99 a month and launches September this year and also on Google Stadia in 2020.

Roller Champions looks like a very clever challenger to all things Rocket League, a team based PVP sports game which is also Free to Play with a free demo on PC to play right now. Looks good though so hope it finds its way to consoles.

Eves Guillemot takes to the stage as CEO of Ubisoft, offering thanks to all the fans for the love and support they give the Ubisoft games that they love. He then announces a new project “Gods and Monsters” , inspired by the attention to historical events in Assassin’s Creed and now they are moving into the full fantasy genre releasing February 25th 2020 for PS4, Xbox One, Nintendo Switch and PC.

That was a very solid showcase from Ubisoft, a few surprises and new content for current games but also Watchdogs 3: Legion which is look exceptional, Ghost Recon: Break Point blew my mind as did the road map for content drops for Division 2.

A little disappointed not to get a big surprise like a new Splinter Cell game and Skull and Bones was completely absent after suffering another delay earlier this year but Ubisoft kept on brand and on message with genuine passion and love for the fans and communities around their games.

If anything I will say this was a very safe showcase and with most of the above seeing 2020 as their release windows, I can see many publishers holding some big titles back for the release of Project Scarlett from Xbox and the next PlayStation console from Sony.

I am smiling and I am happy and I just wanna play as a 75 yr old OAP Woman going full John Wick meets James Bond with Watchdogs 3 next year!