Ever since I was a kid, I have always been a fan of adaptations of Chinese story ‘Journey to the West’ and over the years this has manifested in TV shows such as the iconic ‘Monkey’ to various animations all telling variations of that original story. I have to admit that the original release of Unruly Heroes on Xbox One slipped under my radar until the trailer for the recent PlayStation 4 release caught my eye. A quick bit of research showed that the developer team behind Unruly Heroes, Magic Design Studios, were made up of some of the team behind Rayman Legends for Ubisoft and I was more than a little intrigued.

The opening video explains how the sacred scroll that preserves harmony in our world, has been torn up and scattered to the winds. Now dangerous creatures are sowing discord and chaos throughout the land when four unlikely heroes step forward and Sanzang, Wukong, Kihong and Sandmonk must join forces to defeat the evil and restore peace to the world. I really liked that this video plays before you even reach the main menu and beautifully sets the adventure up before I could even hit start.

Once I was in the game, I was instantly struck by how the visual art style and animation from the opening video continued into the game, and the similarities with Rayman Legends can already be seen in the animation style of the characters and enemies and the side scrolling levels follow the same visual style. But here I have no problem in that, by sticking to what works visually it ticks many boxes from the off as the dev team clearly chose to stick to that playbook throughout the game which has bonuses and sadly, some negatives as well but will come to that a bit further on. 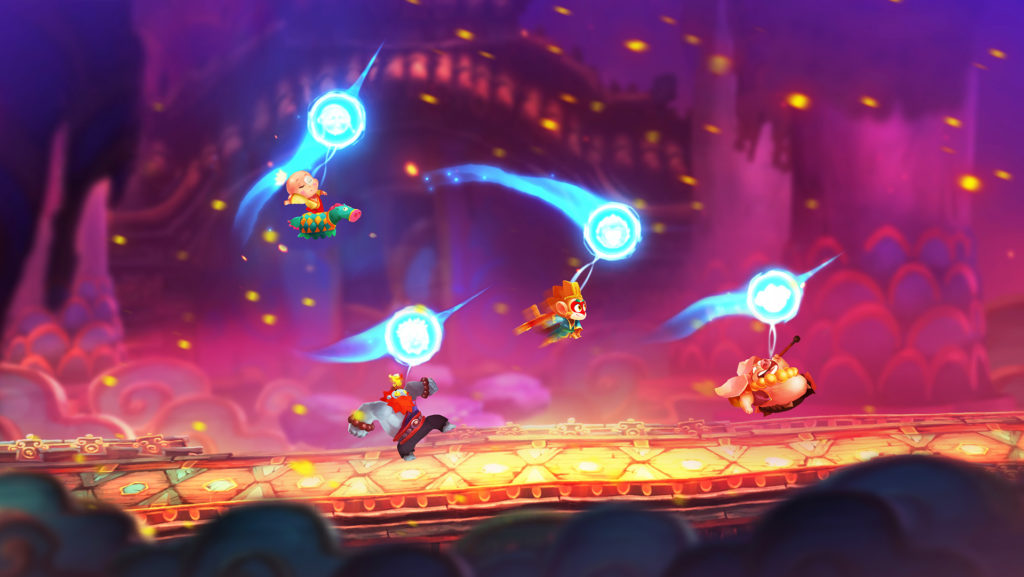 Gameplay varies throughout the story from standard platforming to side scrolling action to intricate puzzle platforming. This variety does keep the gameplay fresh for the first time you play the different levels and following each boss encounter the story moves to a different environment and playing style which will force the player to react to it which can involve changing which characters they use. The player can control one any of the four characters and by using LB, can quickly switch to another. Each character has their own fighting style, jumping ability and special move. For example, Wukong the Monkey King character fights with a bo staff, can double jump and his special move allows him to create a giant magical version of his staff which can be used to create a bridge when the level requires it whilst Kihong the Pig is able to jump higher and glide, has a rake for a weapon and his special move is the ability to blow up into a balloon to reach higher areas in the level. What is clever is that switching between the four characters will always mean the next character will have a different jumping style so you can move from a double jumper to a glider in one switch but for their fighting style you might have to switch a few times to get to the hero you want to use.

I really appreciate that levels are very generous with checkpoints and that if a hero falls, they will become a bubble which if collected will bring that hero back albeit with a reduced health, something very handy when it comes to the boss fights. The story is split into 29 levels across 4 worlds with the boss being the final level for that world and are multi stage fights similar to how Cuphead boss fights work. Each level has collectables to find in coins and artwork as well as a par time that players should aim to complete the level in which depending on how a player does by using a medal system to award players for each level and all levels can be replayed in order to improve your performance. Thanks to an update that came out just a couple of days after it launched on PS4, the game now has additional challenge difficulties and a photo mode, the latter is great because the hand drawn art style allows for some rather lovely screenshot opportunities.

However, by using so many different influences from other 2D action platformers, Unruly Heroes fails to match the refinement of them. Platforming when simply is very straightforward however in the later levels the complexity of the level design often requires very precise movement which sadly the controls fail to give. It also tries to use the challenge style of Super Meat Boy by putting obstacles in your path which should you fail to navigate around them can leave you stuck until you use sheer determination to battle your way through but can be extremely frustrating especially when you see the death counter upon level completion. The gameplay will most focus on using a trial and error mechanic where it will throw in surprises to test players but wants players to learn levels like the back of their hand in order to try speed running the level on a subsequent replay of it, but I did find that some levels were just so annoying to complete that the desire to go back and try again was the least desirable thing at the time. 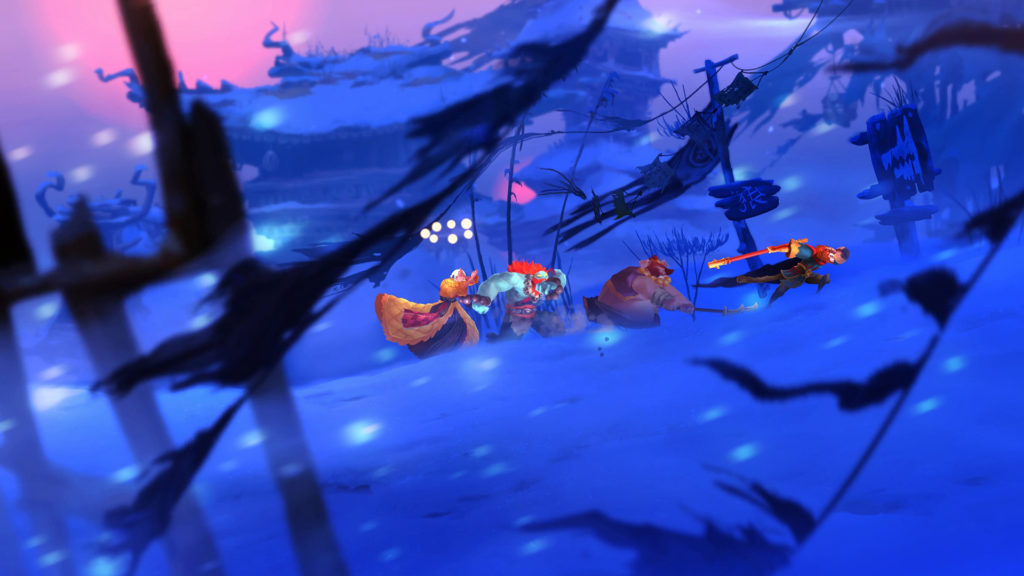 At times Unruly Heroes is a true joy to play and it is a world and story I loved being in but sadly the niggles and the lack of real polish in the controls tarnish the experience. A lot of the difficulty in the levels is as much of a result from the clumsy controls as it is a complex section of the game. When this game gets it right, it really shines but it certainly would benefit from some quality of life improvements just to smooth the edges a little more. I love the comedy in the narration from characters in the game, the boss fights and levels are diverse enough to make me want to replay them and the more I played the level the more I felt I could improve on my previous attempts.

Unruly Heroes definitely does enough to stand out from other 2D platformers but by trying to do everything that every other game does, it at times fails to get its own fundamentals quite right. I can still happily recommend this game however and there is a lot of satisfaction and fun to get from it, and with four player local play option for the story and ability to play it solo it is certainly full of content.

Just be prepared to try and try again at times and hope for just a little sprinkling of Monkey Magic to get through some of the levels.