The popular Surgeon Simulator has finally made the jump to a Nintendo console with the arrival of Surgeon Simulator CPR on the Nintendo Switch. This enhanced version of the game comes with new features, such as a local co-op mode, but will it prove to be worth the effort?

In Surgeon Simulator CPR players take on the role of Nigel Burke as he goes about performing variety of increasingly bizarre surgeries. Players will have a selection of tools at their disposal to perform the surgeries with some rather unconventional items included. The idea is to remove any organic matter in the way of the objective of the operation by working out which tools are most effective for each of the jobs. 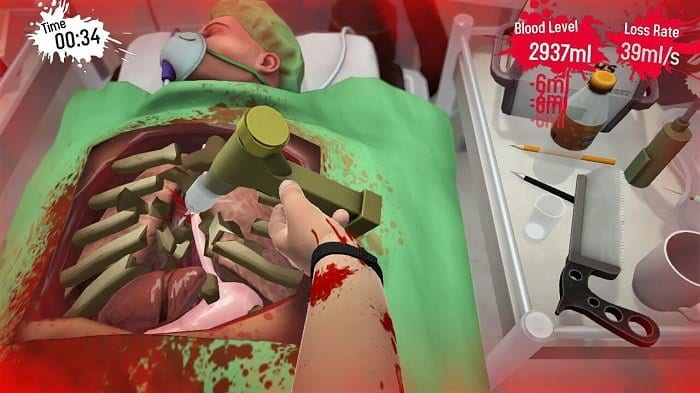 However, it has to be said that someone new to Surgeon Simulator will struggle a lot whilst playing this game. In a way it is similar to being taught to swim by a strict parent. In that he or she lures you to the edge of the deep end of the pool and then pushes you in. Surgeon Simulator CPR has some very basic instructions for various actions in the form of floppy disks that are inserted in a retro personal computer in the main hub. What it does not have is a proper tutorial explaining exactly what each tool does and the most effective way to use it. It can feel frustrating to slowly figure out how best to use everything that can be used whilst performing operations.

The game would have definitely benefited from providing proper instructions or at least offering to guide players who might start to feel overwhelmed by what is being asked of them.

Yet it can also feel rewarding to eventually get over how blood might make most players queasy or how the somewhat realistic looking organs look like whilst being smashed to bits or removed. In reality the patients should be dead by the end of the operations, but anything can happen in the virtual world of Surgeon Simulator.

This is the kind of game that is at its best when not taken too seriously. Surgeon Simulator CPR is definitely the sort of title that could be extremely fun in a group taking turns whilst most likely botching operations. Which is where the newly implemented cooperative mode comes in handy. It’s no wonder that the original game became so popular in the era of live streaming when it was originally released. The sort of situations that players will find themselves in are begging to be shown live to the world.

The main issue is that Surgeon Simulator CPR almost seems to deliberately want to make itself as joyless as possible. Getting stuck in one of the operations will result in not having access to further operations. Which means having to do and probably fail the same one over and over again. It’s odd that a game that can create some truly hilarious moments is so compelled to limit what players can do. 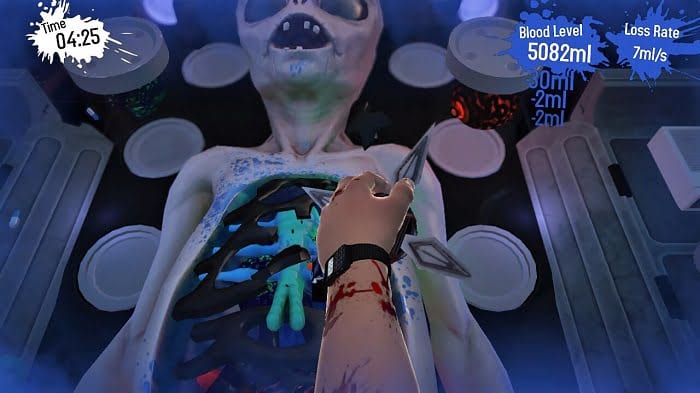 At many times the character might accidentally inject himself with what looks like a local anaesthetic, which results in some surreal botched operations. Fortunately the words malpractice and lawsuit don’t appear to exist in the Surgeon Simulator universe. Such moments serve as reminders as to why it can be an amusing game to play.

However, there is no denying it that it is certainly not a title that can be recommended to those lacking patience or who want to get into med school. Although the extra content and more accurate controls are a welcome addition, Surgeon Simulator CPR’s steep learning curve will alienate most players.