The final piece in the master tapestry that is the current MCU has at last been unveiled as Captain MARVEL releases today internationally in cinemas. It is also quite hard to fathom how in ten years of the MCU, that it took 20 films before a female hero focused film was released, but who better than Carol Danvers to lead into a new era. I have been both intrigued but also concerned by the sheer number of trailers for the film, intrigued by the story they were hinting at but also at just how much of the big action scenes had been shown in the trailers, but it was time to how the final piece of the puzzle slots into place leading into Avengers: End Game.

I will start by saying there is a wonderful tribute to the late Stan Lee at the start of the film which is very touching and heartfelt and a moment where myself and many others in the screen took a moment to think about Stan, it is very strange to know that for at least this and Avengers: End Game will have Stan Lee Cameos, and they have even more meaning and presence now that he has passed, and this was a lovely way to pay their respects to him. Tasteful and delicately done which alongside one of his final MCU cameo’s, will keep Stan in the hearts and minds of fans as they watch.

Captain MARVEL has a lot on its shoulders just ahead of End Game’s release next month following how Infinity War ended with Nick Fury’s final act of using an old tech Pager to seemingly message an unknown hero for help with the Captain MARVEL logo appearing on screen just as Fury turns to dust following the Snap. So even before the film begins, there is huge pressure to introduce and set up this hero who Fury considers is the Earths’ last resort once Thanos had won but also never felt was required as aliens came through wormholes in New York and a rogue AI being dropped an entire city from the sky. 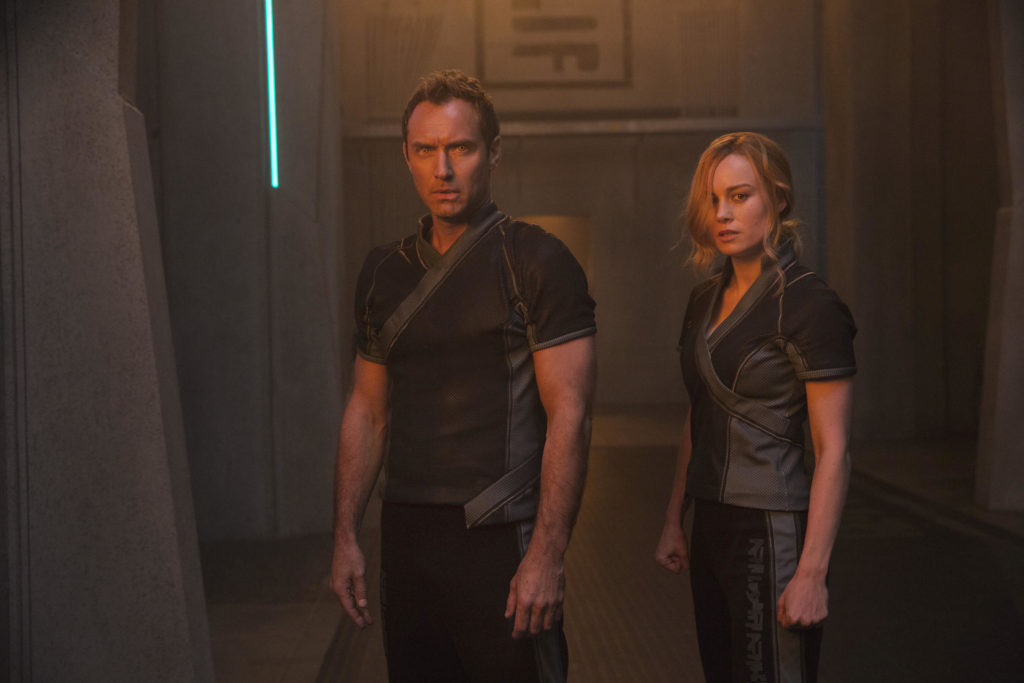 So, with the bar set pretty high already, it was finally time to meet Carol Danvers, which took a good hour or so into the film before you do so as we first meet Vers, member of Starforce, a Kree Special forces unit, waking up before going to train with her mentor and team leader Yon-Rogg. Vers is sassy, quick to use sarcasm but headstrong and determined as seen in her combat training with Yon-Rogg. It is also clear that Vers has powers beyond the Kree strength and fighting skills which Yon-Rogg is making very clear that she must focus harder to control but to also work on her own skills and to not rely on this power. We are also introduced to the supreme leader of the Kree Nation, The Great Intelligence, and during a session where Vers is having a talk in Virtual Reality with The Great intelligence, we can see that Vers is troubled by strange memories she does not understand, when again she is told about the potential of her power but to focus on controlling her emotions.

Her team is then sent on a dangerous mission to recover a Kree agent before their deadliest enemy, the Skrull can intervene. The Kree and Skrull have been at war for centuries, with the Skrull having the natural ability to shape shift into any person they see. But the mission is a trap, and the Skrull are able to capture Vers and submit her to mind probes by a Skrull commander named Talos which causes her to begin to remember more of the strange memories as Talos pushes towards a particular memory they need information from. Managing to escape, she crash-lands here on Earth, through the roof of a BlockBusters video store in the 1990s which is when the film really takes off.

One of the things I took away from Captain MARVEL is just how much of it is a celebration of everything that has come before in the MCU as being set in the 90s means it is a story that happens before Tony Stark builds the Iron Man suit and Fury begins the Avengers Initiative. In as much as this is an origin story for Captain MARVEL herself, it is also at the same time an origin story almost for a very young Nicholas Joseph Fury, Agent of SHIELD who is first to respond to the report of something strange break in at the BlockBuster store. After 20 films, it is really nice to see Samuel Jackson finally given the chance to have far more screen time and dialogue on screen, and the effects used to de age him for this role works really well, not so much for Clark Gregg as Phil Coulson, who in the 90s is a new agent with SHIELD and partnered with Fury. I also liked how they did not try to overdo the nostalgia of being back in the 90s, instead using clever and genuinely funny moments to highlight the difference of back then and today which older members of the audience will get right away. The soundtrack is very much of the 90s and the film will quite often take every opportunity to drop a 90s tune in, not at the same level that Guardians of the Galaxy cleverly used its own soundtrack but it still has a nice touch to the setting. 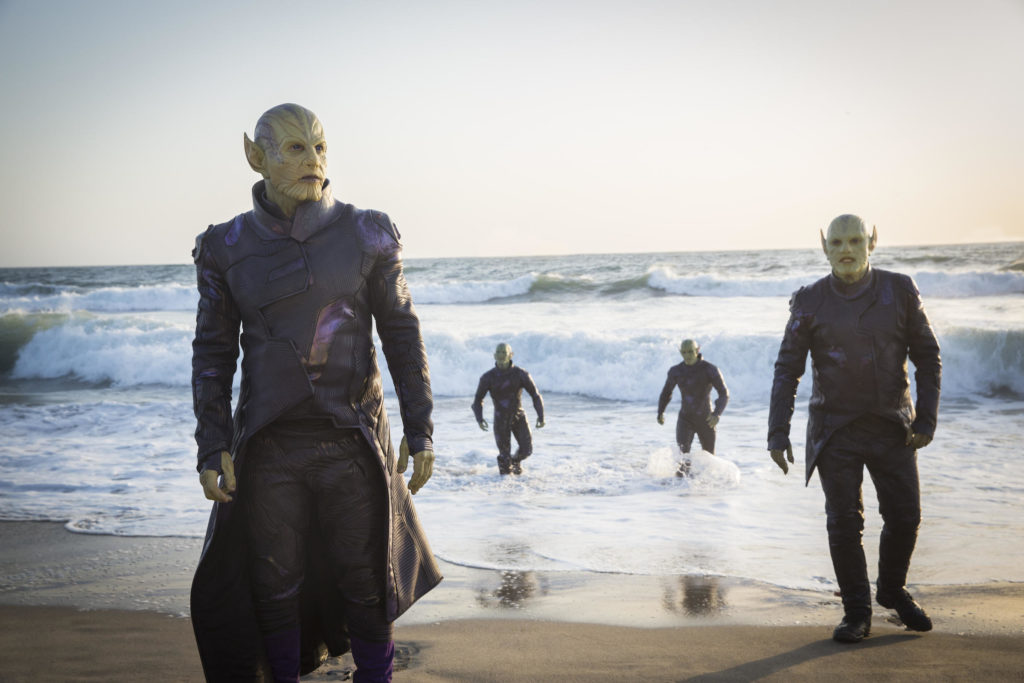 I also really liked Brie Larson as Carol Danvers, the interactions with Nick Fury came across really warm and funny in the film, even before Carol regains her memories. She brings a warmth and human side to what essentially is the most powerful character in the MCU next to Thanos which is also where the film fell down a little for me. I got the feeling that this was about showing how powerful Captain MARVEL can be and in doing so, the pace at which Carol Danvers is introduced finally, is sadly short lived. But it is thanks to the brilliant performance of Lashana Lynch as Maria, Carol’s best friend and former Air Force test pilot who is as strong and skilled as Carol and helps Carol remember her life before the events that led to her gaining her powers. Next stand out performance has to go to Ben Mendelsohn as Talos who goes all out bringing him to life and has some of the best moments in the film which was a nice surprise for his character and the Skrulls, which could be intriguing as the next phase of the MCU carries on after End Game.

The demonstration of Captain MARVEL’s powers in the final act was spoiled sadly as it was used in so many of the trailers before release but you do get the sense of the real power that she has, which as I said earlier, really feels like the reason behind the timing of this film coming out just before Avengers: End Game. This certainly sets up enough for the audience to know what impact having Captain MARVEL in End Game could have, and definitely what a MCU will look like after End Game and with the twenty years or more game between this film and current MCU timeline, there is still room to continue the story of Carol Danvers in one or two films at least to continue to build on her story depending on how she is used in End Game, which one of the two post credit scenes gives a nice little tease to.

Captain MARVEL is a very fun film to watch, it is celebratory of the current MCU which gives fans a look at a very different Nick Fury and a world before the time of Avengers and evil villains. Even getting to see Ronan the Accuser before the events in Guardians of the Galaxy was a great way to bring back this underused character and hopefully a chance for him to return in Captain MARVEL sequels. It is all very routine MARVEL though, there is nothing ground-breaking or overly memorable but it does get the balance of origin story, action and comedy right, with special mention going to Goose the cat for being well….Goose the cat. This is a MCU film that definitely knows that it has done enough to introduce Captain MARVEL as a character at a time when the MCU is about to change completely however End Game ends but it has so much more story to tell in sequels, wich is no doubt the actual plan for her going forward. 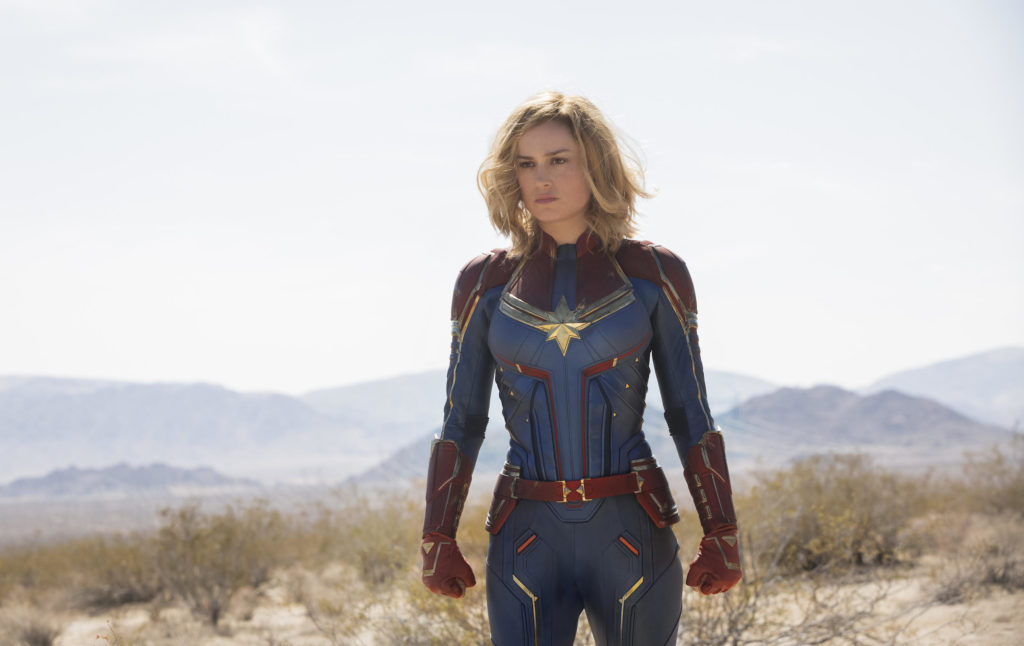 This is a great popcorn film and for me, after the darkness of Infinity War and the uncertain End Game, this is a much needed bit of fun with good action, sensible comedy and a chance to connect some dots from the early years and loose threads from other MCU films but opening up more cosmic stories now that there is a chance to learn more about the Kree and the introduction of the Skrulls. Could they have done more, yes they could have but again, with End Game looming and the merger of Fox bringing the X-Men, Deadpool and Fantastic Four licenses back under MARVEL’s control through Disney, the next phase of the MCU is going to be huge and with Captain MARVEL now established as a potential main character for the next phase, this was the sensible way to go.

Go see it and enjoy it for what it is, it is a great first look at the future of the MCU!

Captain Marvel features select scenes specially formatted for IMAX theatres with an expanded aspect ratio, which means audiences get to see up to 26% more picture than standard theatres, only in IMAX.

It's appropriate that a game about a young woman...
Read more
Phones