Huawei Consumer BG has today announced that its smartphone shipments for the 2018 year have exceeded 200 million units, including the Huawei P20 and Mate 20 series and Honor 10. These 200 million shipments, including Honor devices, constitute a new record for Huawei.

Huawei smartphone shipments from 2010 to 2018 (in millions of units)

In the past eight years, Huawei Consumer BG has persisted in the concept of “consumer-centric” and using innovation to create value for its customers. The company has also led a number of the industry’s most popular, innovative, and competitive technological fields, such as photography, battery life, communication, and AI. This innovation has won the favour of consumers around the world. 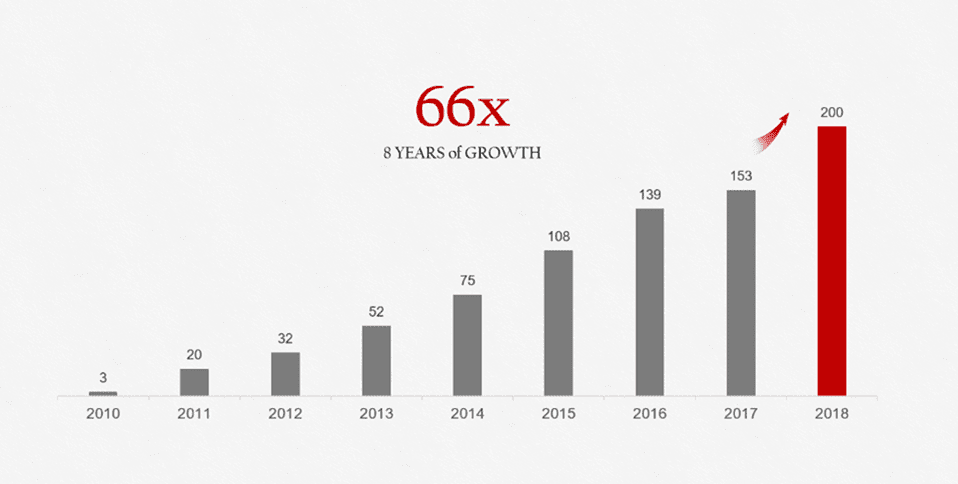 It’s important to remember that a smartphone serves as the bridge between the physical and virtual worlds, and to continue to play that role, it must constantly store and protect more and more information. Therefore, Huawei believes that the privacy and security of its users is just as important as making outstanding and appealing products; this is an issue of trust between us and our consumers around the world. Huawei has thus put the issue of privacy protection ahead of basic commercial interests and complies with Generally Accepted Privacy Principles (GAPP) for privacy protection, the most stringent privacy technology framework in the world, as well as all requirements set forth in the EU’s General Data Protection Regulation (GDPR). Huawei also applies Privacy by Design principles throughout all of its product development, design, verification, sales, services, and procurement activities. Huawei has also built onto the open ARM chip architecture and its underlying Google Android system to further enhance security for both devices and users.

In the past eight years, Huawei’s smartphone shipments have increased from 3 million units in 2010 to 200 million units in 2018, reflecting approximately a sixty-six-fold growth. In the global smartphone market, Huawei has gone from being dismissed as a statistical “Other” to ranking among the top 3 players in the world. And in the second and third quarters of 2018, Huawei became the world’s second largest smartphone manufacturer, with a global market share of 14.6%.

At present, Huawei smartphones are being used by more than 500 million consumers in more than 170 countries around the world. According to a report by IPSOS, one of the industry’s leading third-party research institutions, the Huawei brand has already become associated with the idea that it keeps on progressing and has strong innovation ability and trustworthiness in the eyes of its global consumer base.

Richard Yu, CEO of Huawei Consumer BG, stated that: “Looking to the future, Huawei’s consumer business will focus on the core concept of ‘consumer-centric’, and will dare to keep innovating, and make every effort to become a pioneer and leader in the next wave of the smartphone revolution, as well as constantly create new value for consumers, let our consumers better enjoy their lives, and truly make Huawei a brand that is beloved by consumers the world over.”

Chris Hare
A True Tech Geek at Heart, I Started my life of being a Tech Geek at the age of 5 with the BBC Micro. Went on through most of Nintendo stuff and now a Xbox and PlayStation fan. I also leaked the information about the leaked Hotmail passwords story from October 2009 that went World Wide. I Started writing tech articles at the beginning of 2011, most of my articles are about Android phones and Xbox One and PlayStation 4 and other gaming news. When Chris has free time its with the family.
Previous articleA Closer Look at the Propeller Engine from Hape
Next articleDYNASTY WARRIORS 8: Xtreme Legends Definitive Edition Comes to Switch