I have really enjoyed the Just Cause series over the years but I had real problems with the last game because the technical issues it suffered just spoiled the experience. But the gameplay was sound and wing suiting about and being told to blow up everything around me was quite a buzz so when I read that Just Cause 4 was moving to a new game engine that should address all the flaws in the previous game as well as having a bigger world to use as a playground well, I was just itching to get flying about. It was a major disappointment to not only discover that the technical problems were not over and everything I did like about the last game were somehow now absent, I was both confused and let down by it all.

Alarm bells first rang in my head about Just Cause 4 when reviews only came out the day before its release and then it was mainly PC versions being reviewed with no console reviews available to read. Now that does not automatically mean a game is bad but it usually the delay is due to either online services not being activated until launch or to avoid major story spoilers from getting out in the open. But after playing Just Cause 4 for the last eight days I think I can say that the state that the game released in for consoles and in this case the Xbox One, was no doubt a big factor as this game has issues, annoying and frustrating issues both technical and design wise that just sunk my heart the longer I played it.

Our hero Rico is back and this time has travelled to Solis in order to continue his fight against The Black Hand mercenary army after discovering this his father had been working for them with a top-secret project that involves weather manipulation. The person in charge of the Black Hand, Gabriela Morales who is as formidable a foe as Rico has encountered yet and is soon thrown right into the fight to take down her and her army, find out why and what his father was working on for them and help the people of Solis regain their freedom. Standard Just Cause story but in a much bigger sandbox to play in which uses many of the gameplay mechanics fans will instantly recognise from his grappling and parachuting with the same dramatic wingsuit action where every flight can end with an epic level faceplant into the ground. 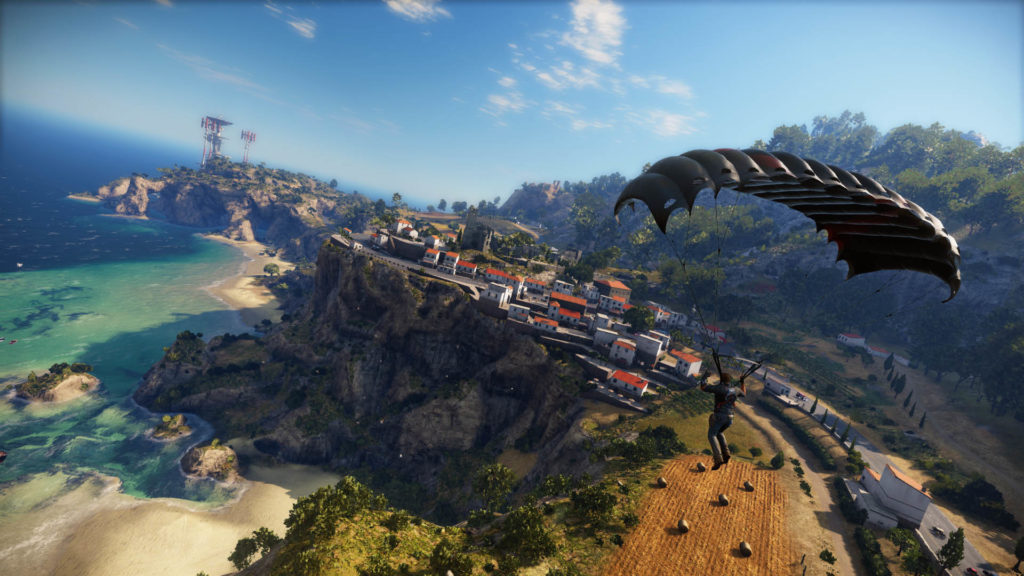 The very thing I noticed was the moderate improvement to the visuals thanks to the new engine that Avalanche Studios is using and it handles the world and also the cutscenes which are now all using the game engine rather than a pre-rendered cutscene. For the opening 15 minutes I was really impressed with the new engine, everything looked great from the buildings to the scenery and snowy environment I was grappling around heading to objectives. The first cracks came as soon as it became daylight and oh did it all become very blurry to look at from the draw distance of buildings far away to things up close. It was just so jarring and distracting that when character models in cutscenes began to look fuzzy with lighting effects not performing as they should on characters clothes and hair and worse, the animation and character movements even lagged at times with screen tearing becoming more frequent during key story scenes.

The problem with the visuals is something that the developers are fully aware and have used their official social media to announce that they are working on fixes to address these problems but playing this game right now, two weeks post launch and still these problems are a real issue which following the many criticisms of the last game, to have more technical problems is just ridiculous and personally too big an annoyance to forgive for this release version of the game. Visuals are not the only problem because the physics in the game world also can become a massive distraction which took me right out of the game experience enough to at times just pause the game in astonishment that these issues were never addressed before release.

The gameplay that I loved in Just Cause 3 has been stripped down so much that what has been left of it is just a tedious mess leaving me bored more than excited to jump into more action. The same style of having to liberate areas of the map is used but not the method of liberation. In Just Cause 3 Rico would be tasked with clearing enemies out of an area by destroying their bases and security centres by literally raising every part of them to the ground. It was bombastic and huge fun and yet for some strange reason, Avalanche decided not to follow that for this game. You still have to liberate regions on the map in order to unlock key story missions but this only involves completing a single mission objective and then sending in a squad of rebels to take that region.

It just falls so flat playing wise, you can still go in and wreck bases but the fact you are not told to or required to as you were in the last game just makes it feel pointless. Not to mention the fact that the majority of missions involve either finding a terminal to hack and then covering it until its complete or escorting someone else for them to hack a terminal and then covering them until its complete just becomes so repetitive and dull and unrewarding. It boggles my mind why they took away the most fun aspect of the last game and made it an optional thing to do that has zero rewards for doing it. So what is left instead is a huge sandbox with boring things to do, rubbish side missions and technical issues that plague every gaming session. 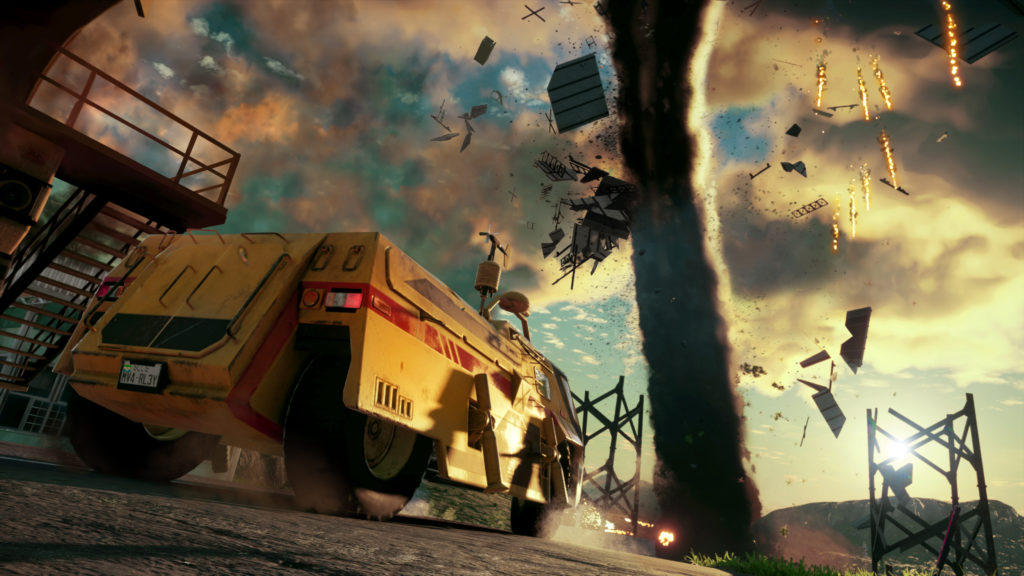 What makes it more frustrating is that this world has some amazing things in it from main story missions that can have some real epic moments such as the ‘Storm Chaser’ missions which brings in the biggest new addition to the series, weather. When I say weather, I mean the absolutely massive F5 level tornado that can be seen destroying everything in its wake even outside story missions. It is an incredible thing to see and interact with. To watch it create havoc across the world by sucking up everything from vehicles, to enemy bases and whole towns really is something to see and the real reason they changed the game engine in order for it all to work. The world itself is also alive and you will often see traffic accidents and battles raging between the rebels of Solis and the Black Hand army as you just explore the world, I even had a plane land right next to me with no idea of why or how it came to crash.

Vehicle use is just terrible as cars and motorbikes just handle so clumsily, I often just take a helicopter to get to places. I do like how the grapple has been improved so not only can you attach it to objects and enemies but now you can have three load outs to include balloons to air lift things and a booster then you can attach to things and trigger it to send them spinning or flying away. This can really test the realms of reality that the physics in the game uses but it can lead to some very fun shenanigans and experimentation. I do think other than the technical issues my biggest problem is that there just so little that is new in terms of gameplay. What used to be fun to do in the last game has been stripped down to nothing here and the rest just feels like it has only been tweaked with nothing really changing massively. I could fire up Just Cause 3 and have more fun and that is not what is supposed to happen with a new title.

Even the tone of the game has changed so much that it feels very strange that the borderline parody level it previously had towards action games has been forced into a more serious one with Rico being less fun to play as. He is all miserable now with little fun interaction with other characters throughout the main missions. The plot of the story kind of makes logical sense but the execution and new side characters are just so dull so missing the humour I enjoyed as well as much of the gameplay I loved about the last game and what is left is sadly a broken mess of disappointments.

I had so many hopes going into this latest instalment of the series and that lessons from the last game had been learned but sadly this is a big misstep instead and even if the promised fixes come in for all the technical issues, there are still too many let downs for this to be a must play title right now. Even with the end of year sales coming up fast I would still recommend waiting for this to drop to very bargain bucket levels pricing before picking up, a lot of work has to be done to fix the many problems it has but this is just a Rico Rodriguez I do not recognise or enjoy playing as.

Sean McCarthy
Freelance writer but also a Gamer, Gooner, Jedi, Whovian, Spartan, Son of Batman, Assassin and Legend. Can be found playing on PS4 and Xbox One Twitter @CockneyCharmer
Previous articleXiaomi UK Sale event for Boxing Day has started already and save big
Next articleLast Minute Christmas Gifts from Kingston