To many, myself included, the Darksiders series is a cherished part of their gaming life and one that was sadly cut down in its prime when the original THQ publisher closed down and was surprisingly not bought out by another publisher during the final fire sale of THQ IPs before it closed. It has been a staggering six years six Darksiders II and though both the first games have been remastered leading into the announcement of Darksiders III, it really has been a very long time to return to the world of the Horsemen. Delving back into the series with a brand-new Horseman in Fury and a new playing style had me excited but ultimately left me with very mixed feelings about the new entry.

Just like Darksiders II, this game happens at the same time as the first game which saw War accused of breaking the 7th Seal and triggering the apocalypse which saw the destruction of the world of man and plunging the sides of heaven and hell against each other. With War chained, Fury is summoned before the Chard Council and sent on the mission to track down and recapture the seven deadly sins, which had previously taken all four Horseman to imprison. Fury demanding that on completion of this task that she be made leader of the Horsemen, sets off to find the seven sins.  Right away I absolutely loved the character of Fury, a very confident and powerful Horseman who knows just how powerful she is and truly views herself as the strongest one. Fury also longs for battle and starts off by hoping that she has been summoned to take on a planet of demons and has no problem with barking and demanding things from the all-powerful Chard Council even when she can see her brother War in Chains rendered powerful by them.

Each entry in the series has been very different to each other but always keeping the same amazing visual art style. The first Darksiders was with War and was a fun hack and slash title where as Darksiders 2 was more of an RPG with Death being able to change and upgrade both weapons and armour throughout the game. Both would see their Horsemen visit varied locations as they set out to complete their task with War wanting to prove his innocence and Death looking for a way to undo the apocalypse and free War. Darksiders III however changes from both of them and it is not just the gameplay that changes this time but also the world itself as the hub locations are gone and instead Fury simply goes on a continuous journey to track down the deadly sins. It is very strange to not have a map for the very first time or to be sent to grand locations to complete quest objectives. Instead Fury is very much centred on finding the next sin which puts her on a very linear path even though it will take you back to previously visited locations. The lack of hub areas makes this feel smaller than both previous games, which is a shame. 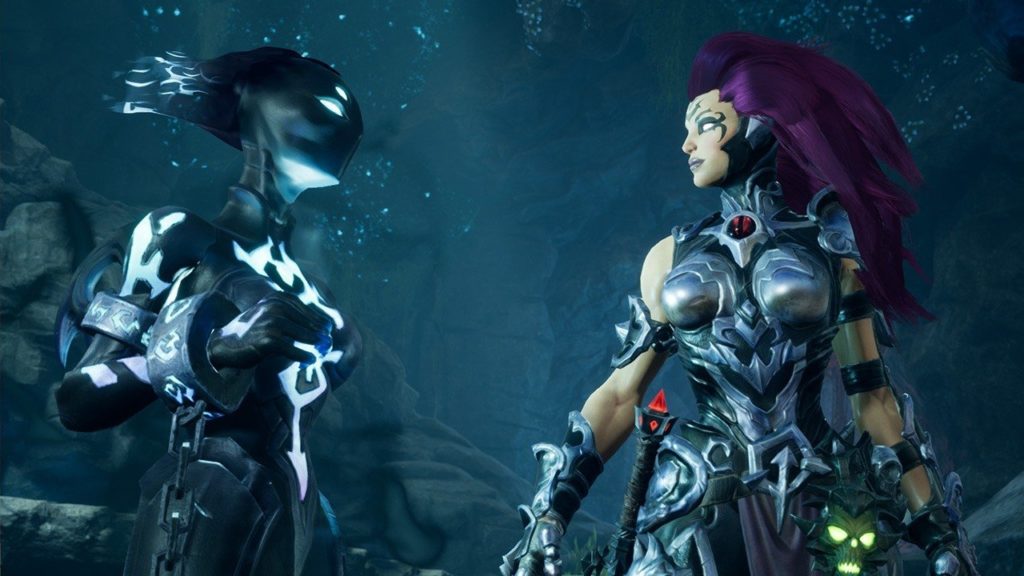 The combat itself has also taken a swift change from the previous games and for the most part you can definitely tell that it has been inspired by the Dark Souls style of games which will see any enemy you encounter capable of killing Fury and all enemies really scale to your current power levels. This does make this a more difficult game this time around which can offer some fun challenges but quite often can be equally frustrating as the game will often use the numbers game against Fury so more often then not, Fury is always outnumbered in combat. This is somewhat based upon Fury’s weapon of choice which is a whip capable of reaching attacks and hitting multiple enemies around her. Sadly, I found the new combat system fairly clumsy, lacking the precision of both earlier games and with a more focused on Fury dodging attacks in order to trigger her counter ability. The enemy lock on camera can be a real hindrance as well when taking on multiple enemies at once and the version of the “health vial” which in this case takes the form of crystal shards that Fury can break to buff her attacks, replenish her havoc form and wrath attacks but also health. The issue with this is that the time it takes to break a crystal leaves Fury far too vulnerable in situations so even if you do crack a health shard you can still be killed during the animation of her breaking it which is beyond infuriating, if you pardon the pun. In trying to mimic the Souls style combat and health system, Darksiders III loses the finesse of the previous games.

Now the combat does change up a little once Fury starts collecting the Hollow Powers, which once obtained can be used to grant Fury new elemental powers and abilities but also a new weapon which can then be used to create combination attacks along with her whip. These are given to Fury at key moments through the story and are there to really give Fury a new way of traversing through the world. Weapons can also be given enhancement charms which will add buffs to her abilities and attacks which can then be upgraded along the Angelic or Demonic stages which will improve one of the two buffs that enhancement can give. Weapons can also be upgraded to become stronger by collecting materials through exploration and given to the Maker forge to improve the weapons.  I am hoping that with quality of life improvement updates the clumsiness of combat can be improved, just speeding up the animation of breaking a shard will help greatly in fights for a start.

I love that the visuals and art style have remained what fans of the series have come to know and love but it is a shame that for Darksiders III everything feels just a little uglier because of the lack of hub locations such as The Forge Lands in Darksiders 2. What is also surprising is this is after both remasters of the original games looked absolutely fantastic but Darksiders 3 fails to match the same shine that they had. I really also hated the constant in level loading pauses when entering a new section which is just unacceptable for a game on Xbox One in 2018 for a playing world that feels smaller than the other games. Just running to a new section and then having the game freeze randomly breaks the immersion for me but then so does having the area around you finish loading also is perplexing. This can also happen in the cut-scenes with character model details appearing normal then vanishing a second later just reminds you that something is not quite right with the visuals for this game.

I really do love the story though and the voice cast and characters are brilliantly performed and written. The Seven Deadly sins are all wonderfully brought to life and the dialogue between them and Fury is the highlight of the game for me. Like the previous games, the story of why everything is happening will unfold throughout which as a fan of Darksiders is what I really wanted to enjoy most of all with this new entry as the stories of War and Death all  swirling around finding out how and why everything around them is happening now sees Fury trying to piece together how the Sins managed to escape and whilst she begins caring little for why War was being punished, she soon starts to suspect that something sinister is at work. It is this grand story which binds all the games together that I have been longing to see continued and here it does not disappoint. Knowing that a good number of the developer team for Darksiders III are from the original Vigil Games who created the series and first two games helps a lot, but the buggy nature and lack of polish in this finished release is truly heartbreaking as a fan. 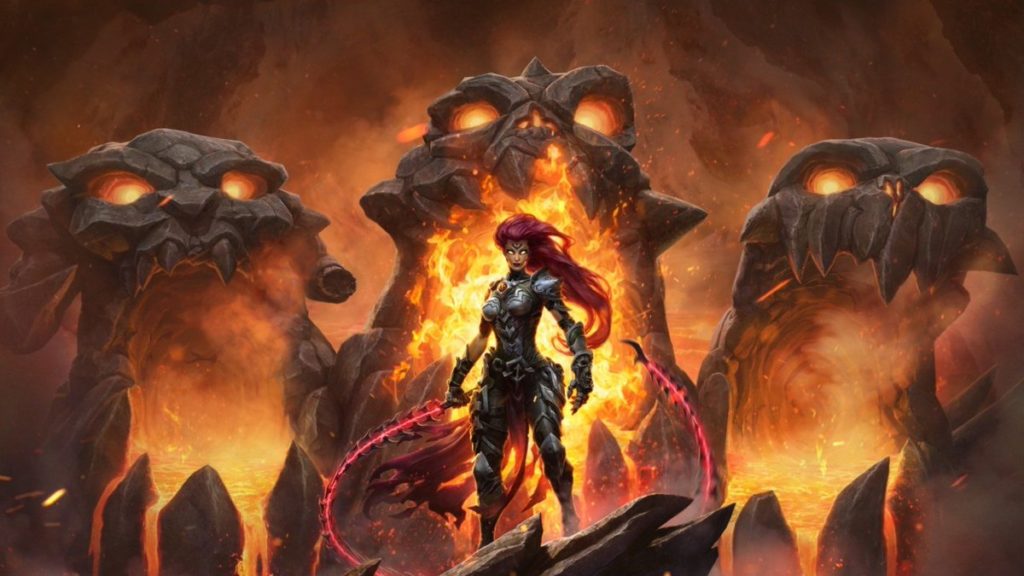 All that said, this is still a very playable and enjoyable entry which I am hoping leads to more games in the series as we still have the final Horseman Strife that could feature in his own game next hopefully. The niggles and issues this game currently have, can be fixed with patches and updates and with two DLC’s in the future for Darksiders III, there is certainly more in this universe to explore. I still love the music and art style for the series and Fury is such a great character by herself that getting to the moment where all Four Horsemen can be playable in a story is so tantalisingly possible now.

Darksiders III does not quite live up to the hype I had for it since it was announced and to get the released version having bugs as well as a clumsy combat system compared with the rest of the series is a real shame when for me the RPG style of Darksiders II and the use of hub areas to bring the universe alive should be reconsidered for future games if they are planned. But I did enjoy this albeit for the occasional rage quit when the combat became too annoying and Fury is just the kind of badass a Horseman should be.

I am left hoping that one of the DLC’s will tell the story of when Fury spent a year sharing a room with Death just because I have to know what that was like!