The first DLC for Far Cry 5 was rather dark in tone and serious in the story it told. Now following on from Hours of Darkness comes the second piece of DLC and a very different tone indeed as the action moves to outer space and lands on Mars. Will say that is the DLC that grabbed my attention when I first saw the Season Pass graphic and especially after playing a certain side mission within the main campaign.

Just like Hours of Darkness, Lost on Mars puts the player in the role of one of the side characters in the main campaign, this time we get to play as Nick Rye who during the main story is a pilot who players helped with the birth of his first child. Returning home from a run to the store to grab some diapers, a mysterious ray of light stops his truck only to have the voice of Hurk explain to him that his help is needed and soon Nick is transported to Mars. Discovering that Hurk has been helping an AI construct, Nick is informed that an alien invasion is threatening Earth and that Hurk has brought him to Mars in order to help the AI prepare defences to stop that invasion.

All standard sci-fi story so far but it is very clear right from the off that by having Hurk as your ‘companion’ that this really is designed to be fun, which kicks off by discovering that Hurk is now…a floating head. That is right, somehow his body has been ripped apart by the DLC story’s main enemy but Hurk is kind of dealing with it rather well. All the jokes and humour really comes from Hurk and his take on everything that is happening as well as his own situation. The dialogue is often silly but that is why Hurk is such a fun character to have in the Far Cry series and having Hurk commentating on things during this DLC campaign certainly lightens the tone and gives it a very tongue in cheek sense of humour. 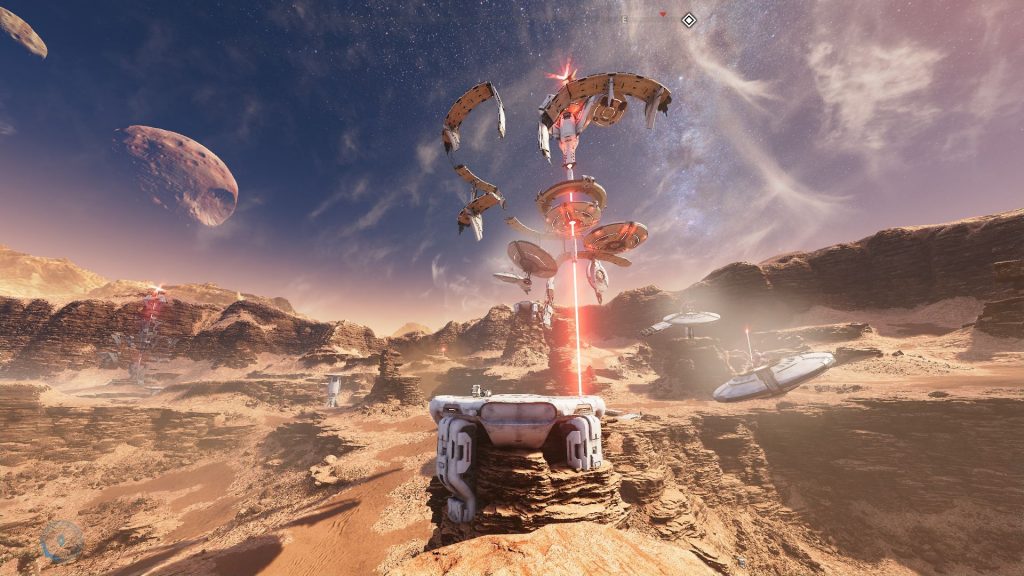 The main aim of the DLC is to help the AI called Anne by finding and rebooting on her terminals and facilities around the map which have all been infested with Martian Arachnids. The map this time feels much smaller than the one in Hours of Darkness but the campaign itself is far longer to complete with a few prerequisite side objectives that have to be completed before you can complete the story. By finding and rebooting all of Anne’s systems and facilities you begin to restore her power and robot forces needed to save the earth. Each terminal requires an energy core to be replaced and these have been taken by the various Arachnid Queens dotted around the map which will need to be hunted down and killed in order to retrieve them. Not only that but the critters have also taken the limbs of Hurk which will need to be retrieved so that Hurk can get his body back before returning to Earth.

Like the previous DLC, game mechanics from the main campaign are used slightly differently here. For example the shop is now a 3D printer which can be used to build new weapons and items to be equipped by Nick but instead of cash money players but instead gather the material Hemoleum, which can be looted from dead Arachnids and found in containers dotted around the map. The weapons have a fun sci-fi twist but start off with conventional pistol, assault rifle, shotgun and phaser pistol which through the campaign will get new blueprint designs unlocked unlocking different types of the standard weapons with some being stronger versions of the base type and a few really crazy ones thrown into the mix. Simply rebooting terminals and stations will make these designs available in the 3D Printer so a good tip is to save as much Hemoleum as you can for when they unlock as you will need the more deadly ones as the campaign goes on.

The action comes in the form of fighting the Arachnids which look pretty much like oversized space crabs and live under the sand of Mars and will be alerted to your presence when you walk on that sand. You will quickly be given a gravity belt which you can use to jet pack boost jumps to help reach higher levels or to avoid the sand which is very handy early on in the campaign until you can unlock and equip the more powerful weapons from the 3D printer. The Arachnids come in different types from your standard soldier time to the more armoured variety as well as flying space bats. The main challenge are the Queens as they are bigger, stronger and have the ability to shoot poison which will nullify the gravity belt and acid which can depower your equipped weapon.

The main issue with the combat is that it very quickly becomes repetitive and once you have strong enough weapons you will be able to pretty much just cheese your way through any Queen encounters and deal with swarms of Arachnids fairly easily as long as you have enough items on you such as grenades and space bandages to heal. The only troubling element is when they swarm all around you but its pretty simple to just jet pack your butt out of there to a higher location to deal with it. You simply go from facility to facility to clear out the Arachnids, reboot the terminal and restore power with an energy core. There are a few distractions in there such as the hunt to find Hurk’s body parts and for some reason Clutch Nixon found his way to Mars putting some of his stunt challenges on there to complete but overall, find terminals, reboot them and move on to the next one until you have finished them all and after a couple of hours not even the comedy aspect can prevent it from becoming a real chore. 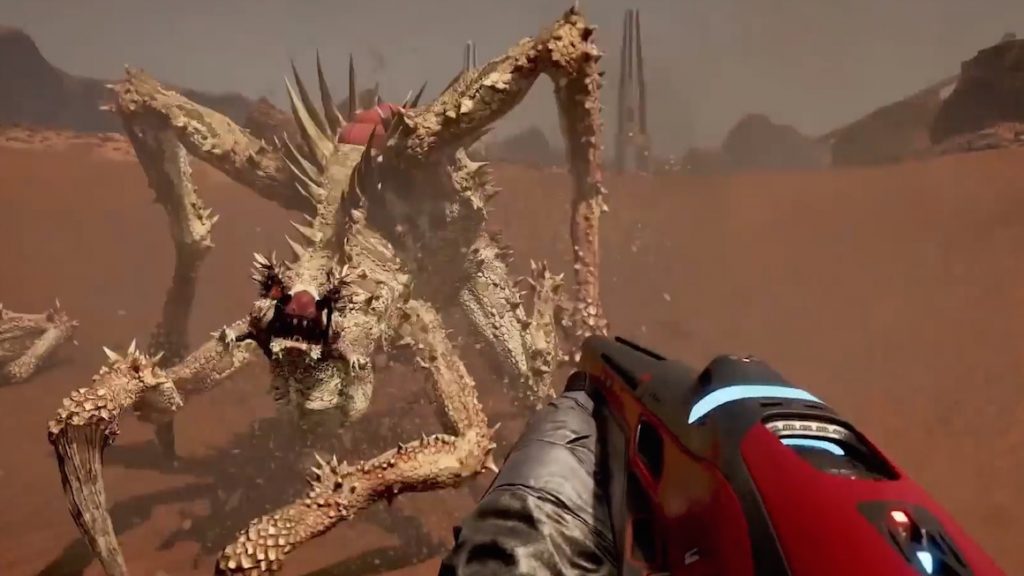 But this is a fun bit of DLC and it is supposed to be fun and whilst the action can get very repetitive it does have some fun weapons to use and the story itself holds up rather nicely. Visually the map looks great and the new sound effects for the weapons make it stand apart from the main campaign enough. I did like how Larry the scientist from the main campaign who you help complete his teleporter is linked into the DLC by way of the notes he has left around the map as he became Anne’s first human helped but fell to the Arachnids. It certainly does enough as DLC to set itself apart from the usual Far Cry 5 gameplay which stops it from being more of the same but I do feel it just could have done with more side missions along the way to break up the gameplay a little more.

Lost on Mars is fun, not very long but not too short with enough comedy from Nick and Hurk to keep it very light. Gameplay can become a chore nearer the end but it is certainly worth playing. Unlike Hours of Darkness however, completing this does not unlock new game modes for it, it is simply a play and complete mini campaign and I managed to complete all the objectives and side stuff in my first playthrough to make replaying it pointless but Im sure I will revisit it at some point. Two DLCs down and the third and final one which will feature the Far Cry 5 take on Zombies and so far I have been impressed with the extra Season Pass content for the game.

Spending time in space with Hurk was not something I expected to do with Far Cry 5 but it was certainly worth the effort and certainly offers a fun new story for fans of the main game to enjoy and get some smiles and laughs from for a few hours.