Many modern gamers could be forgiven for not knowing that the original console war that I remember was between the Nintendo SNES and the SEGA Mega Drive. I was firmly in the SEGA camp after having the Master System console and friends all having the SNES so getting to play one was just a matter of popping to a friend’s house. The MEGA Drive or SEGA Genesis in the US, was the first console I bought with my own money thanks to doing many chores around the house and saving up birthday and pocket money and even upgraded mine with the MEGA CD. It was to me just the coolest console and thanks to the brand new SEGA MEGA Drive Classics collection, I have spent the last few days lost in a nostalgia cloud with zero regrets.

I am not a fan of the ‘Mini’ craze with retro console at the moment with what feels like the forced “you must buy it now before it goes” stock issues that push the demand for  that mini to silly levels so having a collection of the original games I grew up with on my modern consoles is just perfect for me. Thanks to SEGA, we now get to enjoy 50 of the classic MEGA Drive titles from back in the day and the sheer amount of choice just blew my mind as I read the list of games out and ended up just being a retro overload of smiles for me.

That list of games is long and filled with so many classics that it is pretty insane just how much retro MEGA Drive goodness is in this collection:

That is a serious amount of retro gaming right there and I love that the majority of my favourite games from that time are there including the full Golden Axe series, Streets of Rage but also the original Sonic the Hedgehog and sequel. Just browsing through the list just transported me back to my MEGA Drive days and so many happy memories which make the presentation of this collection equally enjoyable. 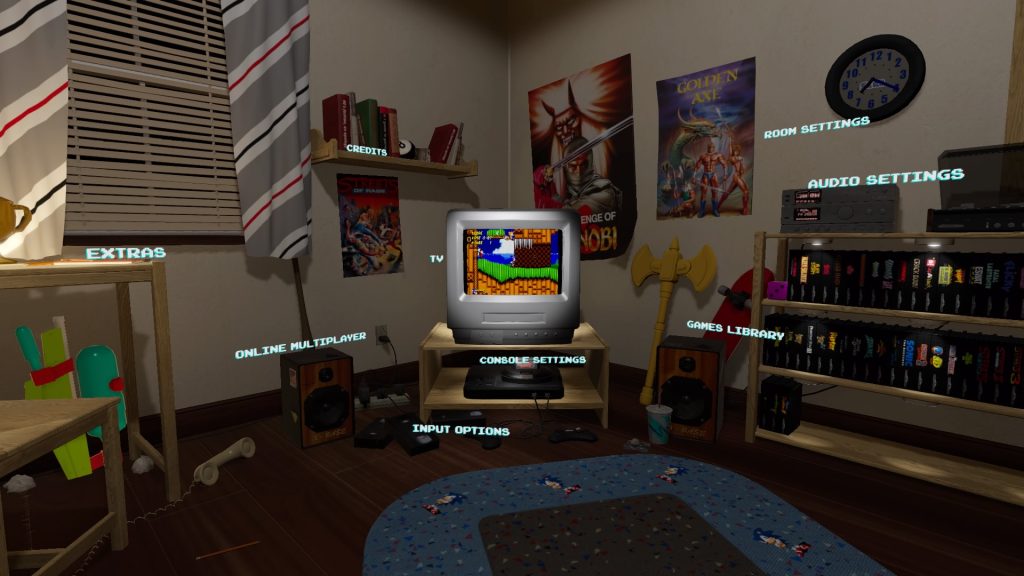 The main menu to this game is essentially a bedroom with a TV and console, posters of iconic MEGA Drive games on the wall and my personal highlight of the launching area has to be the way in which all 50 titles are arranged as a boxed video game collection which can be browsed and when you find the game to play, it will insert that game cartridge into the MEGA Drive console. Now this is all smokes and mirrors of course but just that little visual detail as well as that inserting cartridge sound is just an instant grin moment for me each time. The only niggle I had with the presentation is the games are played with borders to the side of the game and though you can choose one, I think it would have been nice to have a custom border to match the game you are playing. You can play with the visual settings though and even select to have a ‘TV View’ for the borders but I do like how there are enough options that hardcore retro gamers can play around  with the emulator settings to tweak them to how they prefer the visuals to me but the default settings were more than enough for me.

With so many games on the list, I would have liked the option to perhaps take the original game box from the game collection shelf in order to view the synopsis for the game to get both a feel for it and to learn something about it as some may be familiar with these games but some players may not be so the only way to know how a game plays is to launch it with the console. But hot swapping between games is very smooth and quick but the additional attention to detail would have made this an enhanced celebration of these games and the MEGA Drive that it is a shame it was not considered.

Of course this is 2018 and as such SEGA have brought a little modern day gaming to this classic collection of titles and now online multiplayer is available as well as some leader boards for certain games. A great twist are the new Challenges for certain games such as “Complete Stage 2 of Streets of Rage without picking anything up” and adds a nice little mini bonus objective to your gaming. Another more modern addition is that each game will let you create a save point for that game and progress with it. It just makes everything so player friendly allowing you to dip in and out of multiple games and always have a save game to continue on with.

It does have to be said that some amazing titles have been left off the list such as the Ecco the Dolphin games, Sonic 3 and Sonic and Knuckles for example which is a real shame but there is just so much here to relive if you were a gamer in the 90s. For the achievement and trophy hunters out there it has to be said that not every game has one to obtain outside of the special challenges available, but as these games never had them to begin with its not something I personally have an issue with. But this is a very simple decision to make and though this game is really designed for the old school MEGA Drive players of the 90s, it is also a superb way to show the difference between games released 30years ago to modern games such as I have finished and completed all the fights and combat challenges in God of War recently yet I still had to use all four credit continues to reach stage 5 of Golden Axe. These games reflect a very different time in gaming but the enjoyment is still there and thanks to the online multiplayer can now be enjoyed fully once again just as you did with a mate next to you.

The MEGA Drive Classics Collection is a fantastic nostalgia trip down memory lane for me and it offers so much for anyone who remembers this console and its games fondly but also to anyone who may not have heard of these games and need a good education in how video games used to be. Above all it has reminded me just how far games have come since the 90s on so many levels but also some things from back in the day that some modern developers could still learn a thing or to from. This is a collection I will be returning to often as well as streaming some of my own personal classics to introduce them to a new audience. There is just so much to enjoy here and it is packaged so well that it just delivers everything I hoped it would.

Just about every genre of game is represented here in this collection and delving back into the games I remember so fondly is great but also some of the MEGA Drive games I missed out on. The choice is crazy but taking time to try each of the titles brought back many memories of playing Sonic, Shinobi and Alex Kid games that along with the online element now just made this a highlight of 2018 and no doubt something I will return to time and time again.

Now it is back to Golden Axe for me and attempt to not to use up so many credits!

Sean McCarthy
Freelance writer but also a Gamer, Gooner, Jedi, Whovian, Spartan, Son of Batman, Assassin and Legend. Can be found playing on PS4 and Xbox One Twitter @CockneyCharmer
Previous articleNest Hello Video Doorbell Lets You Know Who’s There, So You Never Miss a Thing
Next articlesnakebyte now shipping the Gaming:Seat a New Luxury Gaming Chair