Review: Assassin’s Creed Origins – The Curse of the Pharaohs

Assassin’s Creed Origins has had an amazing run since its release and constant updates such as the recent Discovery Tours mode has really taken it and the series to a new level. That said, the first DLC drop for the game, The Hidden Ones, was a little underwhelming in terms of what it offered players but now we have the main DLC content with The Curse of The Pharaohs and a story that will literally raise the dead and Bayek has to investigate the cause before the ghosts of the past threaten Egypt.

Now if honest, the first time I read the name of this DLC and saw artwork for it I was a little unsure about it. It is not the first time that DLC for an Assassin’s Creed game has gone a little off topic and strange, in Assassin’s Creed III we had DLC that took Connor to an alternate timeline where George Washington had been corrupted by a Piece and Eden and declared himself King. But fighting the dead, on paper at least, seemed a little far fetched even for this series. Thankfully in no time at all, the story opens up an amazing new stage for the game that both celebrates Egyptian history but brings to life some of the most iconic Pharaohs.

Set four years after the events of the main game, Bayek is alerted by Aya that strange things are afoot in the city of Thebes and is asked to go and investigate. Once there he quickly discovers that the tombs of Pharaohs Tutankhamen, Akhenaten, Ramesses the Great and Queen Nefertiti have all been broken into and desecrated after their treasures have been stolen. Now the people are suffering as ghostly warriors and shadows of the Pharaohs have come back to haunt the people. Bayek takes it upon himself to lay these ghosts to rest by returning their stolen artifacts in the hope of easing their spirits and bring justice to those responsible. 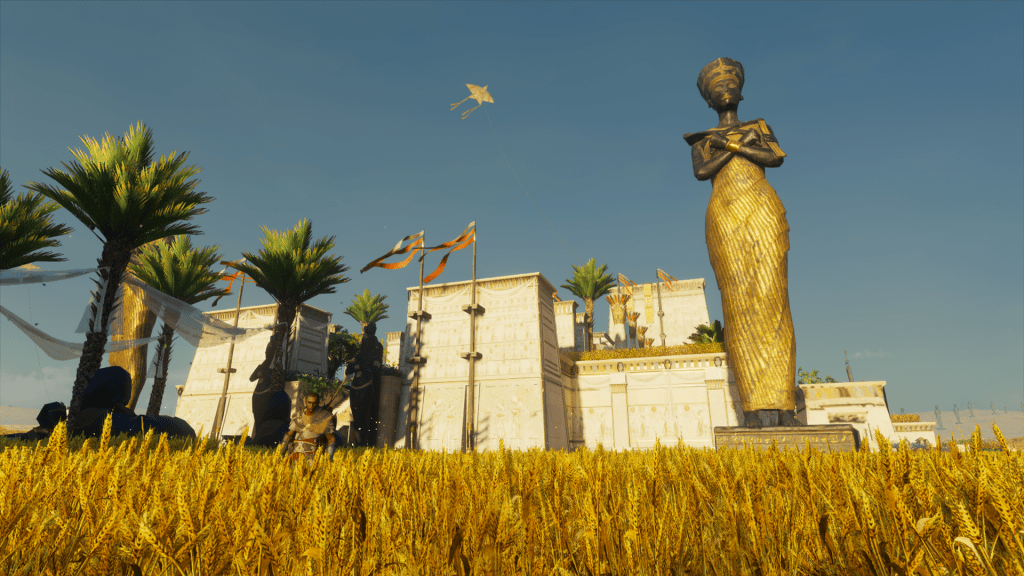 Compared to The Hidden Ones DLC, this is a far larger expansion to the already huge map of Origins. There are full cities to explore this time around but also includes the wilderness aspects that made up a large portion of the exploration in The Hidden Ones. Depending on what level your Bayek is when entering this DLC, the difficulty of enemies can jump into the tough zone straight away with the level cap now raised to 55, a full ten levels above the 45 that the previous DLC raised it too. The Hidden Ones kind of made this level increase redundant as the story missions very quickly gave you the XP needed to hit the new cap and new upgrade levels for Bayek’s gear. This time you will have to do some work to earn the XP and bring your own weapons up to a level to match the enemies this time around especially when it comes to the materials needed to upgrade your hidden blade, gauntlets, tool pouch and armour which I will come to next. I really appreciated how the new level cap added a challenge for my Bayek who has been max level with maxed out legendary weapons since I completed the main story. Here I genuinely had enemy encounters which I had to walk away from because Bayek was just not ready to contest with yet and it took a few hours to reach the level where the “instant death skull” level indicator became something I could handle safely enough.

To deal with the Supernatural Pharaoh shenanigans Bayek undertakes several story missions in order to discover what it will take to bring peace to the dead, often by tracking down what artifacts have been stolen, dealing with those responsible or protecting the innocents from the wrath of the ghosts. This DLC is however the most supernatural filled content for Origins with what at first felt a little strange but quickly became something very fun. By investigating each of the Pharaoh tombs, Bayek discovers a portal to the afterlife which he must then enter to return the artifact and then fight the Pharaoh so that in their defeat they can find peace and be laid to rest finally. Each Pharaoh’s afterlife is a mini world unto itself and visually the best locations in the entire game with each having a theme that symbolizes the Pharaoh. For example Nefertiti is a beautiful sunny world with fields of reeds whilst Rameses is one of a battlefield with dead bodies scattered around and a dark and brutal environment. They are all visually stunning to explore and all serve like a mini city and even some side missions that will not only help lead into the final battle with the Pharaoh but also reward in a rather nice legendary weapon.

Enemies take on a more supernatural look as well as normal guards are now soldiers of the dead and just look awesome. Not to mention the rather interesting inclusion of giant Scorpions, which have been shown off in art work leading into this DLC. Killing them will also provide the much needed new material of ‘Shards of a star’ which are required to upgrade Bayek’s normal gear and it can only be acquired in the afterlife worlds and you will need quite a bit of it as well as the usual crafting materials in order to bring the gear up to the new maximum limits. This will encourage exploration of each world to obtain this material but these locations are just so visually stunning to be in that you will want to just explore them naturally anyway to cut loose with the photo mode. 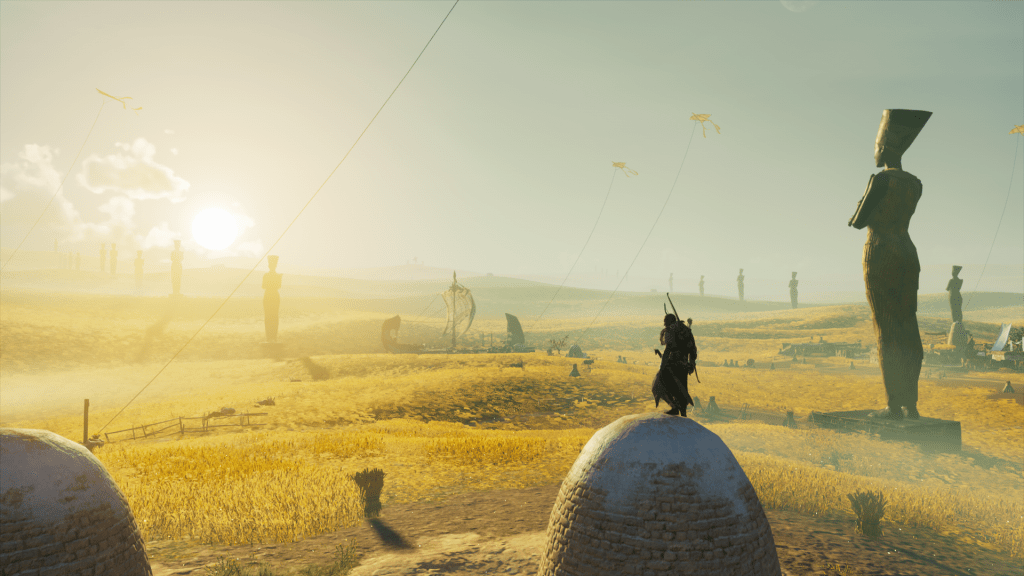 I really came to appreciate the way in which this DLC also deals with Bayek and his faith which has been such an important part of his character all through the game. Bayek is struggling with the faith he has believed in and defended as a Magi. He believes his actions have taken away his chance to find peace in the afterlife but through his interactions with the Pharaohs he is told that his path to the afterlife is safe, and he is asked to stop doubting his actions and to really keep doing the work he has undertaken as a Hidden One. I also liked how at first Bayek handles the supernatural element and dealing with ghosts and the afterlife as something that is just another experience with the Artifacts which he feels is just an illusion crafted by their effects. It does break down though when Bayek returns from the afterlife with a rather nice new legendary weapon but at least the writing has Bayek processing what is happening which is something I felt did not happen too strongly in the main story and The Hidden Ones DLC.

As the final piece of DLC with the original Season Pass, The Curse of the Pharaohs offers a great deal of new content and exploration to enjoy even after reaching the new level cap of 55. The work that has gone into this DLC to create the new locations, especially the Afterlife areas was certainly worth the wait. With the roadmap for Assassin’s Creed Origins looking to continue this year at least, I can still see there are things for Bayek still to do and I would love to see more focus on his work as a founder of The Hidden Ones which will in time evolve into the Assassin’s Brotherhood we know from the series. Dealing with ghosts and the supernatural was a nice side story for Bayek but I would like to see more real world content for him going forward. 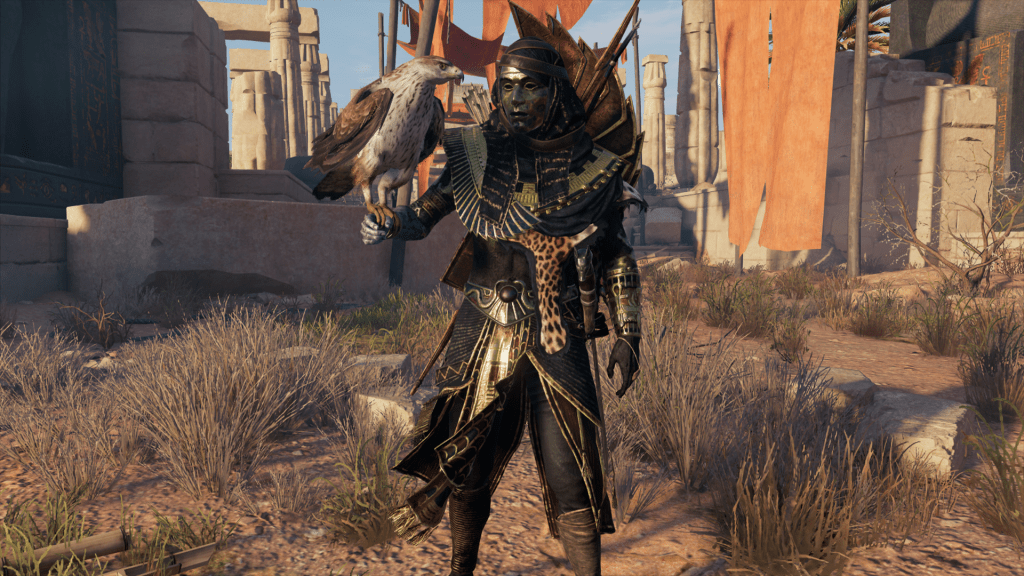 There is a lot for players to sink their teeth into with this DLC with new weapons and gear to be found and upgraded and with the new difficulty challenge brought to the Trials of the Gods and Discovery Tours mode, it is amazing to see where Assassin’s Creed Origins has gone in the six months since release and the promise of continuing support and possible content in the year ahead.

The Curse of the Pharaohs is a great piece of DLC to found off the first planned content for the game and well worth returning to Ancient Egypt one more time to experience.

It is very easy to forget how very different video games were just one console generation ago but especially when you go...
Read more

Sony surprised many with the pop up...
Read more
Gaming

It is very easy to forget how...
Read more
Family

Here is our review of the LEGO Super Mario Adventures with Mario Starter Course.
Read more