Review: Life is Strange Before the Storm Ep 2

I have to be honest, I am really struggling with Life is Strange: Before the Storm as a gaming experience. I just cannot connect with Chloe as a character for some reason which could be a result of knowing where she will end up in the original Life is Strange game or just the heavy handed way in which the opening episode tried to force an emotional connection between her and me as the player with . The story itself is fine as we get to see a young Chloe form a relationship with the mysterious Rachel Amber as well as seeing the immediate after effects of losing her father in a car crash. I had hoped that episode 2 ‘Brave New World’ would help in giving me a stronger connection to Chloe and the story. Sadly it only served to strengthen all the issues I have with this prequel mini series.

*Spoiler warning for player choices from Episodes 1 and 2 ahead*

So the climatic ending to episode 1 saw a angry Rachel kick over a trash can that she was burning photographs of her and her father in after discovering that he was possibly having an affair which has led to setting the forest are alight. Episode 2 has us catching up with both Chloe and Amber in the office of Blackwell’s Principal Wells in trouble for them both ditching school. Rachel is with her parents whilst Chloe’s mother is by her side. Just the visual of having Chloe’s mum in her waitress uniform in comparison to Rachel’s parents of whom her father is the DA for Arcadia Bay serves as way to see the class structure at work in the time to just reaffirm that Chloe is only there because of her scholarship compared to those with money such as Rachel’s family.

One of the big reasons I am struggling to connect with Chloe compared to how I managed to effortless connect to Max in the original game, are the player choices I have to make. This sequence is the story’s way of strengthening the growing relationship between Amber and Chloe as they literally take turns in taking the blame for ditching school. It is made very clear that Chloe is on her very final chance with the school with Principal Wells fully trying to lay all the blame on Chloe because of her disciplinary history over the star student with the well placed in society parents. Amber however steps up, and tries to take all the blame, which considering was actually her idea in the first place, impresses Chloe whilst showing a glimmer of rebellion to her father. However the game then offers some event changing player choice as the result of Amber taking the blame will see her not suspended from school but removal from the school play that night, something Amber has worked hard to prepare for and something that Chloe knows is very important to her. So the player can either let Amber take the blame or make a scene in order that the Principal changes his mind about punishing Amber and instead finally expels Chloe from Blackwell Academy.

The issue here for me is that my player choice was not made based on the emotion of the scene but more on the fact of having played the original game and knowing that at some point Chloe is expelled from the school at some point anyway, so even if I were to let Amber take the blame, it was still happen anyway down the road so I had Chloe take the blame. This then leads to Amber thinking Chloe is more badass but also the side effect of having to deal with Chloe’s mum turning evermore towards David who again mistakenly tries to be the father figure in laying down some discipline such as ordering Chloe to empty her pockets on the hood of his car in the school car park right after the meeting believing she has drugs on her, which after clearing out her locker Chloe has a joint in there. Again my player choice her to either do as told or to rebel and even hide the joint is still based on what I already know from the first game and not the emotion of this situation so there is no connection for me here at all, just going by the number to help happen what I already know will be the outcome. 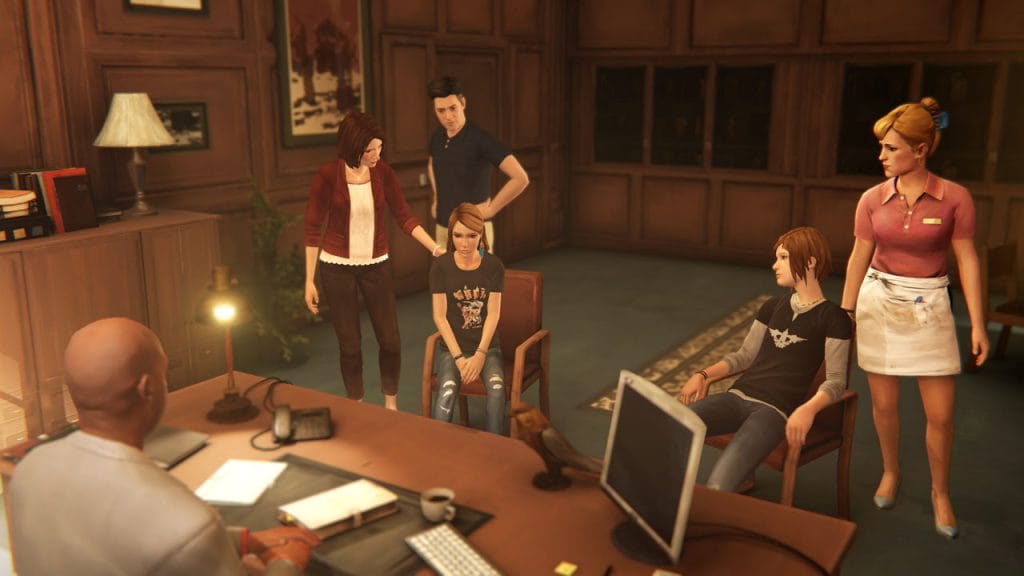 To see the relationship with Amber grow is a highlight of the story and in episode 2 it is only getting more intense and stronger between them. Both characters are feeling the need to escape Arcadia Bay and now with Chloe seemingly having nothing left after been expelled from school, David moving into her home and tension with her mother at an all time high alongside Amber struggling to deal with the truth of her father’s affair pushing them closer together. I did like how the junkyard has become their place to go to escape it all for now despite the really overly complicated mini game which has Chloe searching for parts to help fix and clean up an old truck killing the mood somewhat. The exchanges between Chloe and Amber lead to player choices that can drive the intimacy of this relationship to the point where you can really understand why Chloe is feeling the loss of Rachel in the first game so hard. Episode 1 rushed this aspect far too much for me, but now after sequences have played out, their connection is very clear and understandable with both their lives putting them on a path together which allows the player to feel a part of it enough with choices and options to be taken along the way.

The main problem I have with this episode as with the first one is that of pacing. At three hours long this was painfully slow at times to get through and the forced lingering moments where the game will suddenly pause to play something from the soundtrack, which is an awesome playlist all the same, is truly starting to grate on me. The story moments are well written and great to experience but the sheer amount of padding and filler moments in between them just grind the pace to an annoying crawl at times. I also really hate the “back chat” moments where Chloe can manipulate a person by using her special power of picking out a word in a dialogue exchange in order to illicit a negative response is beyond cringe right now which alongside some mundane puzzle solving such as scaring a bird in order to distract a pupil so you can kick in a sprinkler to make the gardener leave his shed taking up ten minutes it really did not need to. 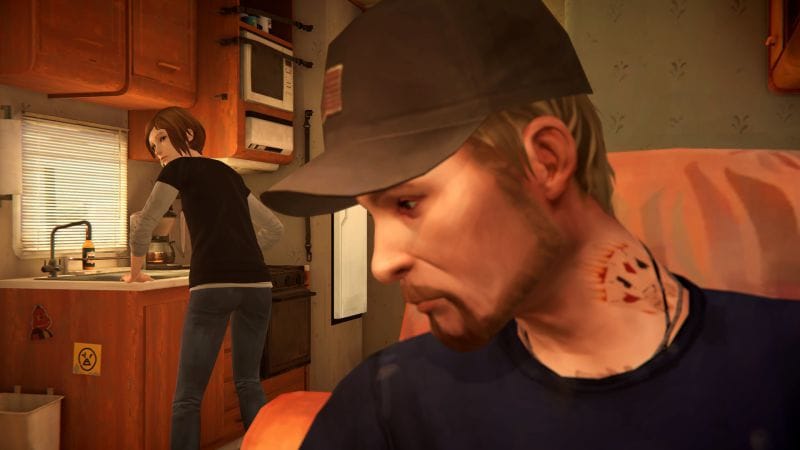 Episode 2 does give us a chance to see more aspects to Chloe’s life as we see her relationship with Frank lead to a rather dark scene in the story which again is a neat set up to events in the first game. These moments where Chloe interacting with characters we know from the original are enjoyable, but the slow pace drags the momentum down between them far too much for me. The story itself is solid as life at the school and beyond start to unfold far more in this episode than the opening but I cannot help but feel that due to this being only a three part mini series, more attempts have been made to make each episode longer then they needed to be to make them feel fleshed out. The story does not need this, if it is to focus on Chloe and Amber then do so and stop putting in rubbish objectives such as the five minutes needed to help Amber’s mother set the dinner table, I mean come on is it really a three step process to lay the table and why did anyone think that would make either a fun or worthwhile section of the game to do?

Chloe can still tag things by drawing graffiti on specific things during the game serving as collectibles and yes it is still weird that the pen never seems to run out just as it is really strange for all the objects Chloe picks up such as the items needed to fix the truck in the junkyard have the animation of Chloe putting them in her pockets which is lazy corner cutting steps which just feel stupid, I mean how does Chloe fit a whole car battery, beach towel and Christmas light bulb in her jeans pockets at the same time, such is the baffling mechanics of this episode at times.

The big story moments are real game changes when they happen and I do feel that some of my player choices have both immediate and long term consequences after I have made them but due to this being a prequel story, none of them really seem to matter as in the end, I already know how those choices will play out from the first Life is Strange, so instead of feeling like I am making them happen it just feels as though I am ticking the boxes in the right order. We do get to understand more about Chloe and where she is when Max returns and it was nice to see less of Chloe’s need to refer to her leaving as much in this episode as the opening. I just want the pace to get to the story parts faster, stop trying to make me feel the same emotions as the first game but forcibly recreating similar lingering moments with music because it is far too obvious what the game is trying to do and therefore fails to have the desired effect. 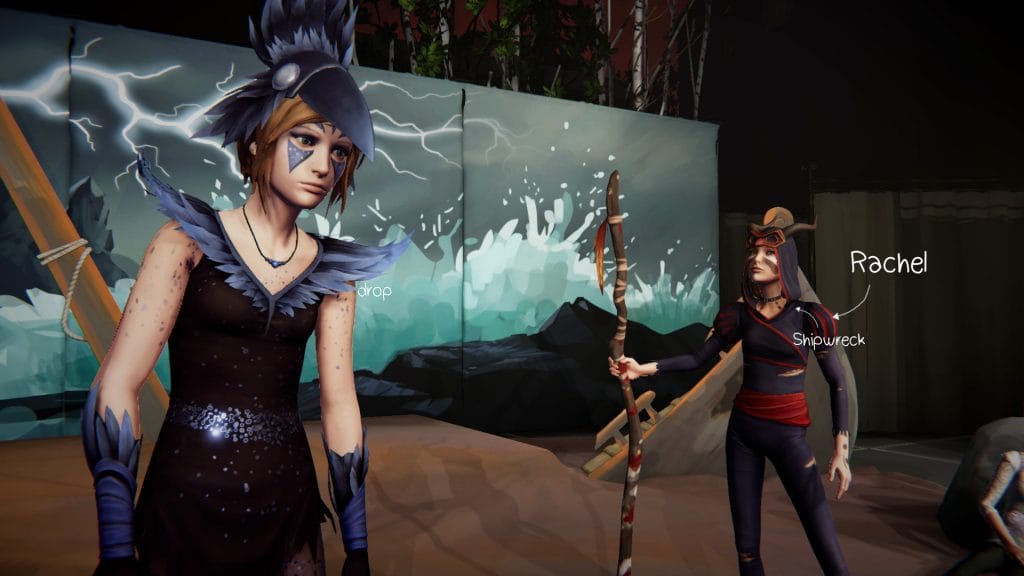 With just one episode to go now, I have really not enjoyed this prequel story as much as I either expected or hoped to. The character elements are working well and it can be intriguing at times to see in motion what I know will be the outcome when Max comes home. I hope the finale just focuses on Chloe and Amber and cuts out the padding to just tell the story instead of sticking in mechanics from the first game just to do so. But my struggle to enjoy this is greater than the reward of playing it and I cannot help but feel disconnected from Chloe’s story far too much to get the most from this prequel.

I hope episode three brings this series together in a more satisfying way.

Sean McCarthy
Freelance writer but also a Gamer, Gooner, Jedi, Whovian, Spartan, Son of Batman, Assassin and Legend. Can be found playing on PS4 and Xbox One Twitter @CockneyCharmer
Previous articleReview: South Park The Fractured But Whole
Next articleAssassin’s Creed Origins puts an Xbox One X in an Sarcophagus