Review: Life is Strange – Before the Storm Ep 1

Life is Strange was a very special game for many reasons for many people, myself included. The story was powerful and captivating with a new refreshing take on player choice in gaming which Telltale Games has dominated for so long. From the soundtrack to the characters and emotive story moments, Life is Strange landed with a huge impact and huge praise on its release. But when the follow up was announced and revealed to be a prequel story focusing on Chloe, months before Max returns in Life is Strange, I had my concerns and doubts going into it and will say it was quite a mixed experience for me.

So let me start by talking about the elephant in the room when it comes to Before the Storm, this prequel was not made by the original developers of Life is Strange DONTNOD Entertainment. Instead Deck Nine were tasked with creating this prequel and further more the original voice actor for Chloe Price, Ashley Burch, was unable to return for this sequel due to the SAG-AFTRA strike so replaced by Rhianna DeVires who originally did the motion capture for the character. Great efforts where made before release to explain to fans that Ashley was heavily involved as the writing consultant. So even before pressing the start button, I was a little nervous about these aspects alone.

Before the Storm is set three years before the events of the first game and focuses on Chloe Price as she is dealing with life following the death of her father and the departure of Max who has left Acardia Bay. As we know how Chloe will be by the time Max returns in the first game, Before the Storm is a story that focuses on Chloe who is dealing with a lot of personal torment which will shape her as the character we will meet later. The story will explore Chloe’s past whilst player choice will help shape her character and story and will have multiple endings based on the choices players make throughout this three episode mini series.

Much like the first game, Episode 1 gives us a good insight into where Chloe is right now in her life by showing us her home and school life as the rebellious character will know she will become, begins to take shape. We begin by joining Chloe as she attempts to gain entry to the Old Mill to watch a live performance by FireWalk This opening gives us a really good look into Chloe as she is right now, a 16 year old teenage girl struggling to find her identity and place in a world where she has already suffered tremendous loss. We also get our first real taste of how feisty Chloe can be, often acting first without thinking about the possible consequences which is shown by her interactions with the bouncer who dismisses her and her fake ID. Chloe will not take no for an answer and here we are introduced to the biggest difference between both Life is Strange games. 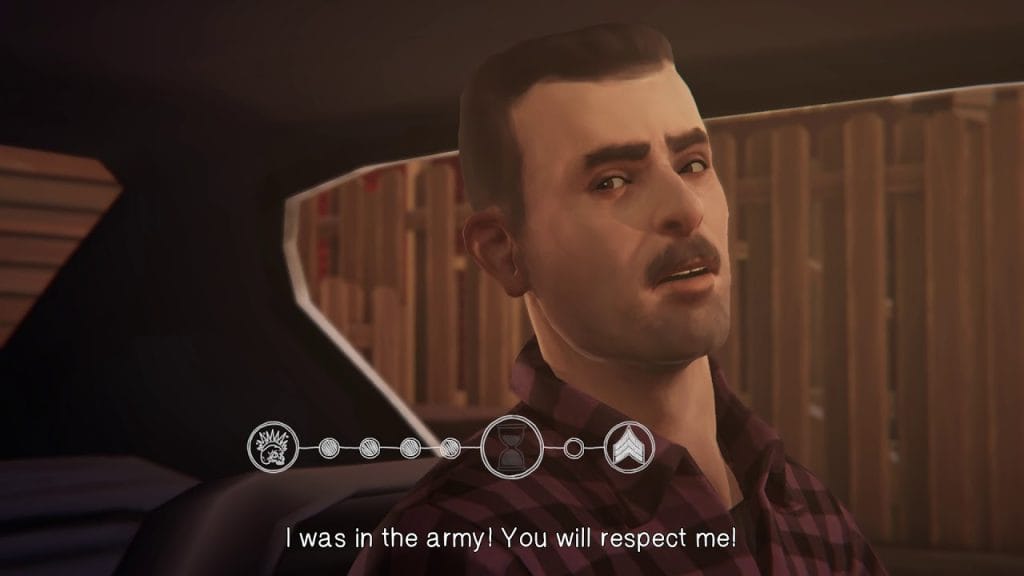 One of the core aspects of the first game was Max’s supernatural ability to rewind time, a game mechanic that enabled the player to change events and to change decisions at key moments if they were unsure about the resulting outcome. But Chloe does not have this ability and instead is giving the superpower of “Teenage backtalk”. Yup, Chloe has the ability to backtalk people in dialogue scenes just to show how teenager this teenage Chloe can be. This probably sounds rather lame and in all honesty, for me it really was. The idea is that Chloe can pick out key words in dialogue spoken to her and then use that key word to reply with a suitable backchat response, normally a weighted insult. Make the right choice and Chloe will successfully turn the momentum in her favour which often means forcing the other person to back down. Should the player have explored the area around before the dialogue starts, it may offer additional responses such as here in this tutorial exchange, which if the Player has looked at the bike parked next to the Old Mill entrance to see it has been decorated in flowers, it will give Chloe the option of mocking the bouncer for having “flowers on his bicycle” to help score final backtalk victory. Backtalk is often triggered when Chloe is talking to people she generally doesn’t like. It does work but for me the dialogue at times can be really cheesy and just lacks the same punch that Max’s time manipulation power had.

Familiar faces from the first game also play role in this prequel story such as Chloe’s Mum who is in the early stages of dating David, the soon to be stepfather to Chloe who right now is just beginning to make his presence felt in the house. We can see how she is noticing things such as her mum removing old family photographs that featured her father, building the animosity held for David whilst at the same time showing that Chloe is still very much grieving over the loss of her Dad. Seeing characters such as Nathan Prescott, Frank the drug dealer and friends from school Eliot, Mikey and Steph are great nods for those who played the first game and is actually a nice element to this prequel. But there is one character that players will no doubt be excited to finally meet, Rachel Amber. 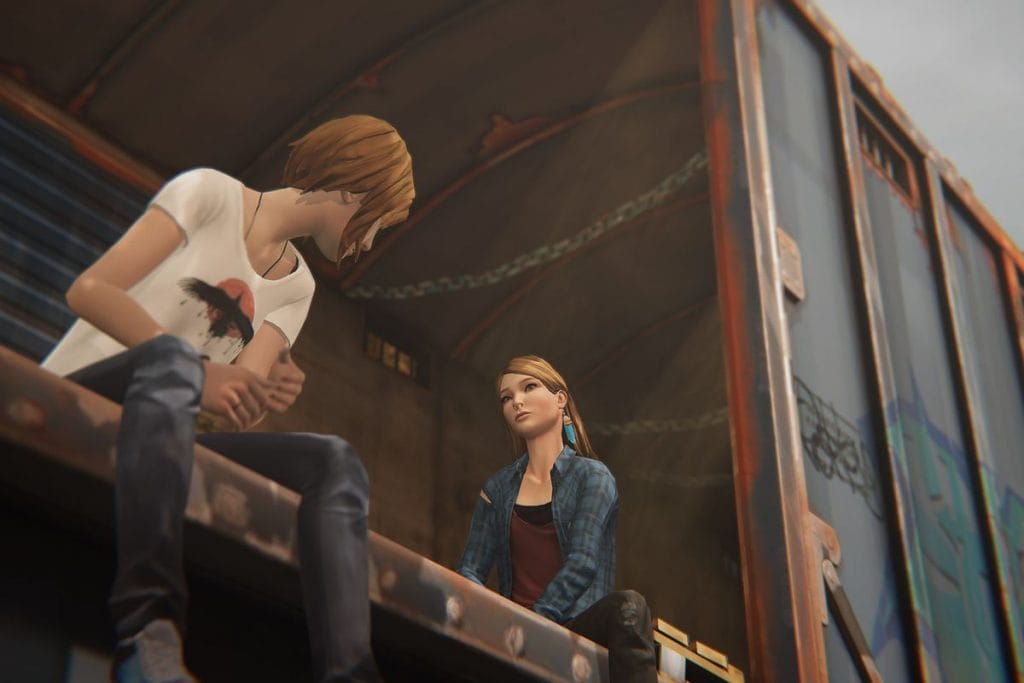 This mysterious girl who played such a vital part of the original game leading to Max and Chloe investigating her disappearance is now a big part of the prequel as the relationship between Chloe and Rachel begins and begins fast. From suddenly going from a place where they are aware of each other at school to suddenly forming a very quick bond at the Firewalk concert does feel a little rushed but that is teenage love in a nutshell. Rachel is someone new for Chloe and someone who seems to genuinely have an interest in her whilst bringing smiles in an otherwise tortured existence for Chloe is very evident even before the main section of this episode kicks in which sees Rachel ask Chloe to ditch school which Chloe needs little persuasion in doing as school is not really a priority for her right now.

To learn more about Rachel as a person and to fully appreciate how the relationship we came to understand her and Chloe had in the events of the first game allows the player to better understand both and especially Chloe. Both have their issues right now and both are angry at the world and looking to escape their misery and being together helps them do this to a degree from what we see in this opening episode. Player choice can shape how this relationship starts by letting the player have Chloe be more flirty with Rachel or simply friendly to her in dialogue responses and players will get the sense that Chloe is certainly more herself when around Rachel then just by herself. The start of a very complicated but special relationship has started and that alone is enough for me to invest more time into this prequel.

But this game does have some issues for me and ones that prevent me having the same level of immersion which I enjoyed in the first game. There is a real overuse of lingering moments, where the game holds on to a moment, pans the camera around and plays an indy music track hoping to generate an emotional response in the player. Sometimes it works, but other times it really just feels like filler to pad out the run time of this episode. It is obvious that Deck Nine are trying to use mechanics that allowed the first game to connect with the player again, but it often fails. I have said that dialogue can be really cheesy and it can also just go on for far too long which made me just mash the skip button to get the conversation over and done with. Then there are the collectible moments which in the first game were photograph opportunities for Max has now become a game of finding a spot for Chloe to whip out a Sharpee pen and do some graffiti. It just lays on the whole element of Chloe rebelling and lashing out a tad too thick to have her just putting graffiti in random places. At two and a half hours, three if you go to find all the graffiti spots, this opening episode to Before the Storm does pack in a lot for players to do but the filler aspect made some parts drag a little too much for me. 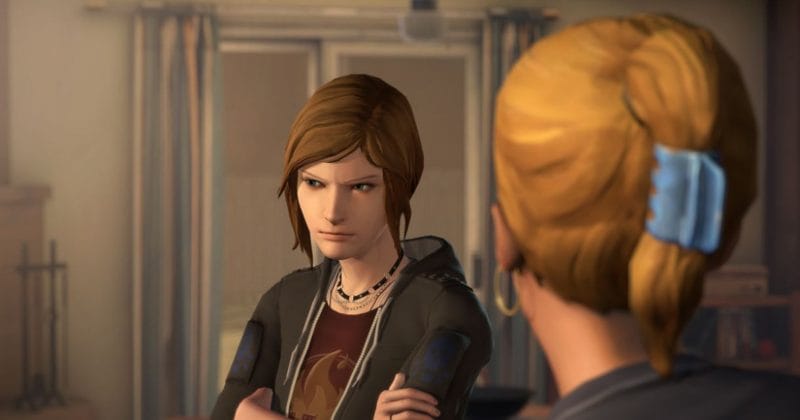 So far there is more to like then to dislike with Before the Storm though I was less buzzed about opening episode then I was with the original Life is Strange game’s opening. In discovering more about Chloe as a person I found myself thinking of her character differently after the events of the first game. I enjoyed how her journal is more about Chloe talking to Max in diary form, almost as though at the end of each day Chloe is emailing Max to tell her about her day despite Max never replying to symbolize the abandonment issues Chloe is feeling towards Max. I am finding the growing relationship between her and Rachel to be compelling and on a personal level I can connect with Chloe as a character as she continues to deal with the loss of her father. There is certainly enough here for fans of the original to sink their teeth into but I do hope the dialogue does improve and the need to rehash gameplay mechanics from the original to illicit an emotional response becomes less forced going forward.

I had my concerns going into this prequel and some sadly were justified. But having played this opening episode I am intrigued enough to want to see it play out and to shape that story around the choices I make. One episode down and two more to go and by already knowing where the road will take this characters in the long run thanks to Life is Strange, I am more than happy to join Chloe on her journey Before The Storm lands.

Sean McCarthy
Freelance writer but also a Gamer, Gooner, Jedi, Whovian, Spartan, Son of Batman, Assassin and Legend. Can be found playing on PS4 and Xbox One Twitter @CockneyCharmer
Previous articleWin a Sennheiser’s PC 373D Gaming Headset
Next articleBuy a Wileyfox Swift 2 X get an Echo Dot in the box