The Neo Geo console was an infamous one back in the day for me. It was an expensive console that was capable of playing real arcade games in your home, but if the console itself was out of reach for most gamers of school age, the games certainly were with most over £100 from the start. I was luckily enough to have had a friend l who just happened to have a pretty well off Uncle who bought him one, and outside of fighting games, the one game we got the most action out of was Windjammers. Now 20 years after its original release, this instant classic is back and with online play for the first time and boy has it only gotten better with age!

Known as ‘Flying Power Disc’ in Japan, the best way to describe Windjammers is that it is basically Frisbee throwing meets Street Fighter II meets tennis on super strength Red Bull. This game is nuts on paper but when it is all put together, you have one of the best sports games ever that even twenty years after the original release, kicks ass now as much as it did then and what is even more impression is just how the gameplay has aged beautifully. Playing it now really feels no different to playing it two decades ago, something that most re-released titles fail to do such as Dino Dini’s Kick Off which did not age well…at all!

Another strength is that the original visuals have been kept, not remastered or changed to make them look more modern but kept just as they were and the art style is such a huge factor in how this game and the generation of gaming all those years ago was like. The nostalgia force is strong with this game, the music and visuals put me right back to that time without strangely enough making me feel old and instead just reminding me that it was a time when gaming was probably in its purest form with gameplay being at the very core and wrapped up in over the top visuals and sounds. So from the trailer you get a great sense of what Windjammers is about. Two players face off in a small tennis court style arena with the aim of throwing a Frisbee or flying disc passed your opponent goal line. Doing so will score points with scoring zones marked out as either 3 or 5 points for the disc landing there with 2 points scored if a player fails to catch the disc and it falls on the ground. Each mach is a best of three sets or games, with the first player to win two games declared the winner. To win a game the player first to score 12 or more points will win. The disc can be thrown against the walls to give the shot a ricochet effect to try and make the other player miss and just like in tennis, you can move up to the half way line where the net would normally be to try and power shot a score for which your opponent can either bounce the disc off the wall around you or even just go for a cheeky lob and throw a slow high disc to catch you off guard.

Now describing the gameplay in words really does not do it justice so above is a video showing my complete run through of the arcade mode. The arcade mode puts you against all the AI controlled characters, each representing a different county like UK, Germany, Japan, Italy and USA. These characters are over the top but amazing to see on screen and each has their own balance between speed and power. As you can see, the speed of the game is fast with furious action with the flow of each game changing on a dime as players score three and five pointers. Then you get the Street Fighter II influence with mini games after every two victories with one where you toss a Frisbee and then control a dog having to chase it to catch it but having to jump over sunbathing beauties and avoid obstacles. The next is ten pin bowling but using the Frisbee as the bowling ball. It is all just crazy over the top fun even in just solo play, but like any game of FIFA or Pro Evolution, comes even more alive when playing with friends in local play. This is very addictive when playing with friends and harkens back to when sofa shared play was how most people played their video games with or against friends and Windjammers is just perfect for this.

But it is 2017, and so for the first time Online battling has been added to Windjammers which brings online leaderboards and leagues as you take on people all over the world online. Now at this time of writing, it is just a few days since the game released and the online element sadly is the only downside to the game right now. Poor connections lead to laggy matches depending on who you are matched up with which can cause disruption and disconnections. Hopefully in time and some title updates the online side will improve adding even more competitive action to this game but the solo and local play alone still makes Windjammers a great title to have in your library. 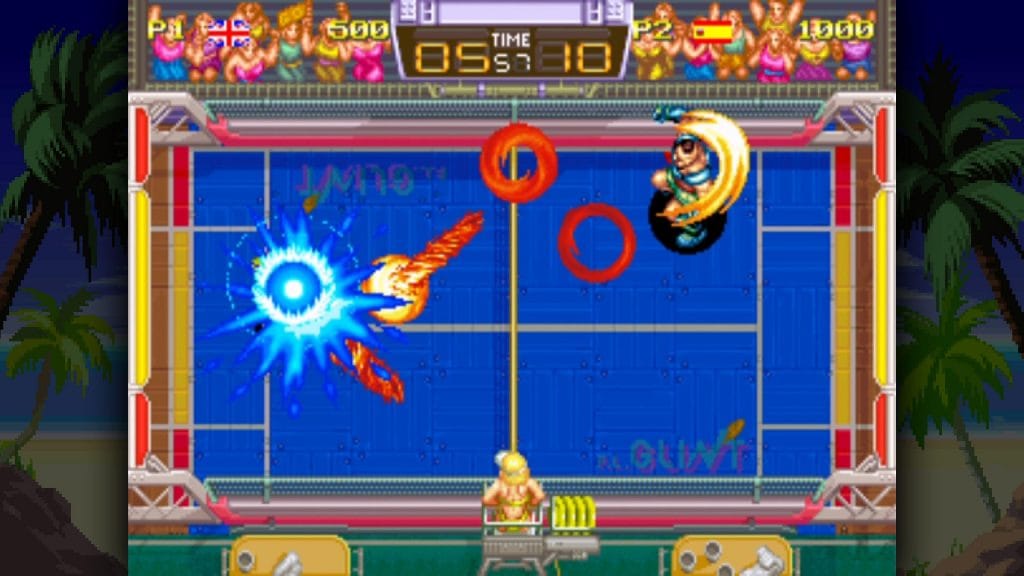 Windjammers was amazing when it released 20 years ago and now in 2017, it stands toe to toe with modern sports titles and stands its ground well. The action is fun and fast with crazy moments enhanced when shared with friends on the sofa. Though the additions of online play modes is rather hit and miss right now, but the low price tag of £11.99 absolutely makes this an essential game to have in your collection for PlayStation 4 or PS Vita. It serves as a reminder of how great gaming was back in the day but also in that strong gameplay and excellent execution are as important now as they have always been in generations of video games going back decades.

Sean McCarthy
Freelance writer but also a Gamer, Gooner, Jedi, Whovian, Spartan, Son of Batman, Assassin and Legend. Can be found playing on PS4 and Xbox One Twitter @CockneyCharmer
Previous articleWatch the live action trailer for Destiny 2
Next articleTravis Strikes Again: No More Heroes coming to Nintendo Switch in 2018

It's appropriate that a game about a young woman...
Read more
Phones