Whilst I was aware of the ‘Ys’ series of Japanese RPG, I have never had the opportunity to play any entry until. This is the eighth game in the series and originally launched on PS Vita in Japan in 2016. Now for the first time in the series, it has come to the PS4 here in the West and I finally get a chance to see what this series has to offer.

We are first introduced to main hero Adol, an adventurer who is currently on board the passenger ship ‘The Lombardia’ working in the crew to pay for his passage. The ship is carrying an interesting mix of passengers and crew with the prologue letting the player as Adol meet or at least become aware of each one as the basics of the game are explained in a nice tidy little tutorial. During an important dinner for the guests, the Lombardia is attacked by a giant squid creature, Adol rushes to fight it and though seemingly defeating it, the ship is destroyed with Adol waking up on the shores of a mysterious Island.

Thanks to a convenient little exposition from the Lombardia’s Captain during the prologue that explained that multiple ships had been lost at sea around an cursed Isle known as “Seiren Island”, Adol Christin wakes up to find himself now stranded on this island and immediately starts to explore. As he does so he begins to find other survivors from the Lombardia and after finding the Captain still alive, the decision is made to set up a village on the island with Adol given the task of searching for more survivors and sending them to the village whilst rescue plans are devised.

A good chunk of the opening hours to the game involve Adol exploring this island to find survivors and to see what the island has to offer and soon Adol meets some survivors who are willing to lend him a hand in the fighting. We first meet Laxia in a rather uncomfortable way and Sahad who join Adol to form the first party for the player. The party system works really well in combat with each character having a specialty to either slash, pierce or bash enemies. Some enemies will have a weakness to one or more of these specialties which leads to the main strength of the party, the ability to hot switch between them. Whilst controlling one party member, the other two will be controlled by the AI so all three will take part in a battle but switching to the hero who can do the most damage is key to winning the fight.

I really enjoyed the combat system in this game as each character has their own fighting style and special attacks via Skills and the ability to hot switch in a fight allows for a deeper strategy especially during the boss fight encounters. Dodging at the right moment will trigger a ‘Flash Move’ where time slows down but attacks can still be made dealing additional damage for the duration very similar to the Witch Time effect in Bayonetta for example. As you explore further in the island you will encounter different creatures and monsters, collecting loot in materials from fallen enemies, discovering treasure chests and leveling up each party member to unlock more special moves. The combat is smooth as silk and with the rocking fast paced soundtrack, the fighting is a real fun aspect to this game enhanced by the three person squad switching make this so accessible to even non JRPG fans. 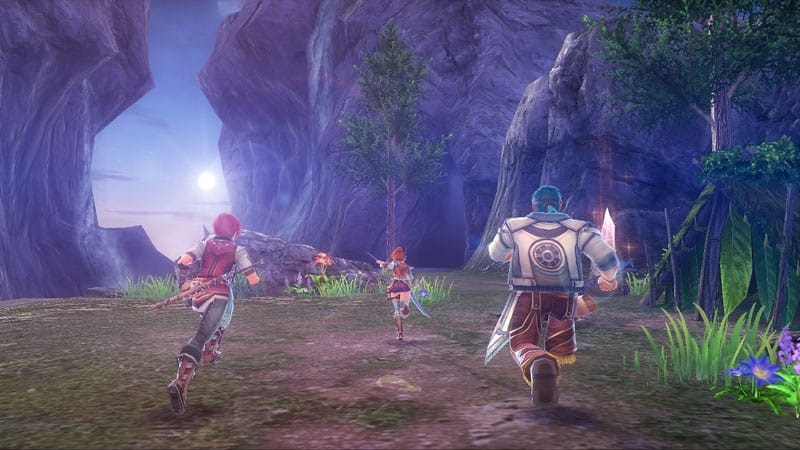 The next strength to the game is the village, the home base setup by the Captain to sustain the shipwrecked people from the Lombardia. As more survivors are found and join the village, it becomes stronger with various sops created based on the skills of the survivors. Soon the village will have a blacksmith, weapons crafting, tailor and a Doctor as you find survivors. There is no currency as no one has any money so instead an exchange system is used where Adol and party use the materials found whilst exploring and fighting to allow for crafting of new weapons, armour and items to use. The higher quality items will need specific materials which can only be found in certain areas of the island. Whilst exploring, Adol’s party will be met with obstacles blocking his path and thanks to the Captain’s highly intelligent parrot acting as a messenger, Adol can ask for the village to come and move the obstacle. Some will require a certain number of survivors to help so exploration is really progress based which helps prevent players meeting too high a level difficulty in fighting.

Visually I really love the art style here, even in the cut-scenes which move to a classic cartoon animated to using in game engine. The PS4 version is much sharper visually than the PS Vita version, and the now translated into English dialogue really brings each character to life. That said, a lot of the dialogue exchanges can be really cheesy which results in a slowing down in the pace of the action, which I found rather annoying at times so quickly skipped as much of it as I could. The story does take a while to get into gear though, with an over 40hour campaign, it will take several hours to break into the main character Dana’s world. There is a lot of gaming here which will come as no surprise to fans of JRPGs with so many lovely moments between the characters that it is a shame that so much filler dialogue is thrown in to taint the mix. 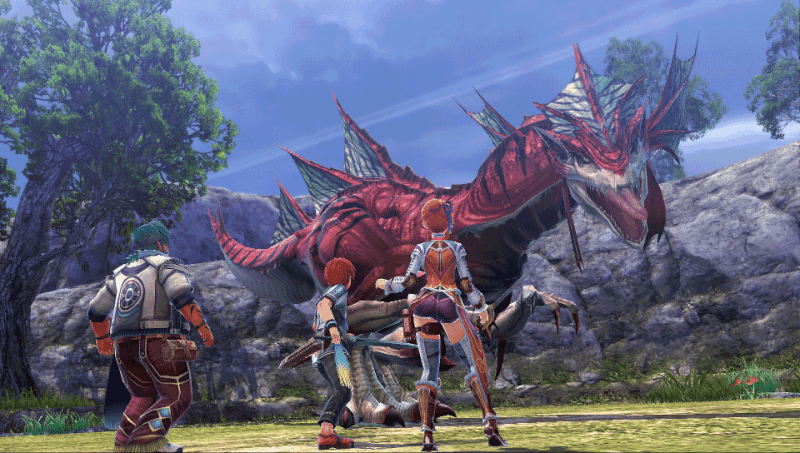 YS VIII Lacrimosa of Dana was a big surprise to me, I was not sure what to expect and although this series is celebrating its 30th Anniversary and eighth title in the series with this game, I never felt out of touch with what was happening in this story. The combat system feels so natural and fluid that it is easy to pick up and the game itself has a great system to welcome player in and to teach them the fundamentals right from the start. The menu system is simplified to make it easy to understand; something other JRPGs tend to not do and it never over complicates what it requires of the player to know in order to keep the progress moving forward. Crafting with materials is simple and the fast travel system allows for returning to the Village and key areas on the Island a doddle so you can never really feel lost in this world, a world that only becomes more magical the further into it you go.

The characters are fun, with a roster of twenty or so you meet along the way, some of which can join your party so the diversity is there towards the end game. I would absolutely recommend this to anyone looking to try their hand at a JRPG for the first time, it is by no means dumbed down but the cleverly designed ease of menus and upgrading of items and characters just has a massive “welcome and have fun” aspect to it which can only be seen as inviting for new players. Visually this game is lovely on the eyes and has benefitted from the jump to PS4 for the series. The music is elegant when it needs to be with an emotive score which then kicks it up a notch during fighting with a fast paced rock style to motivate and compliment the action on screen. Ys VIII Lacrimosa of Dana is such a well put together JRPG that has everything you would expect from the genre but for me, probably the most accessible example of it I have played of this genre. Though it can be slow at times with unnecessary dialogue exchanges and exposition to skip over, this is definitely worth your time and attention, and with a competition time of 40-60 hours, this is one that you can dip into around any other games you may be focused on right now.

To say I was pleasantly surprised by this game is an understatement, I quickly warmed to the story being told and could see the reason why this series has lasted for thirty years. The adventures of Adol Christin is worthy your time and interest.

Sean McCarthy
Freelance writer but also a Gamer, Gooner, Jedi, Whovian, Spartan, Son of Batman, Assassin and Legend. Can be found playing on PS4 and Xbox One Twitter @CockneyCharmer
Previous articleWin Gotham The Complete Third Season on Blu-ray
Next articleRedout: Lightspeed Edition Blasts Onto PS4 and Xbox One