Win a signed poster and DVD for Wakefield 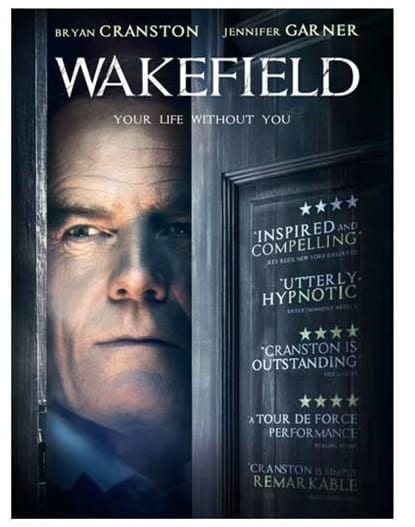 Successful suburbanite Howard Wakefield (Bryan Cranston; Breaking Bad, Trumbo) takes a surprising detour from family life when it all starts to get too much: He vanishes without a trace. Hidden in the attic of his carriage house garage, surviving by scavenging at night, Howard secretly observes the lives of his wife, his children and his neighbours as they learn to live with his unexplained disappearance. But has he left his family, or has he left himself?

A fraught meditation on marriage and identity, WAKEFIELD features a tour de force performance from a never better Cranston in a film that won wide praise following its debut last year at the Toronto International Film Festival. Based on a short story from the legendary American novelist E.L Doctorow and brought to the screen by acclaimed writer/director Robin Swicord (The Jane Austen Book Club, Memoirs Of A Geisha), WAKEFIELD features supporting performances from Jennifer Garner (Dallas Buyer’s Club, Juno), Beverley D’Angelo (Entourage, Cougar Town) and Jason O’Mara (The Good Wife, Marvel’s Agents Of SHIELD), but make no mistake – this is Cranston’s film, featuring a truly towering performance from one of the most important actors working in film today.

We have a poster signed by Bryan Cranston and DVD of the film. to give away.

Win a signed poster and DVD for Wakefield

Andrew Edneyhttp://moviesgamesandtech.com
I am the owner and editor of this site. I have been interested in gadgets and tech since I was a little kid. I have also written a number of books on various tech subjects. I also blog for The Huffington Post and for FHM. And I am honoured to be a Microsoft MVP since January 2008 - again this year as an Xbox MVP.
Previous articleOfficial Launch Trailer for Telltale’s ‘Batman: The Enemy Within,’
Next articleHonor announces a new colour “Glarier Grey” for the Honor 9

Families and children can now easily discover a wide range of entertaining and educational shows and films, with the launch of a new children’s experience on BBC iPlayer.
Read more
Movies & TV

To celebrate the release of SUPERMAN: RED SON on DVD and Blu-ray, we are offering you the change to win a copy on Blu-ray.
Read more